In this Salomon Speedcross 5 review, I’m going to share how over a 2 week period, I tested them across pretty much every kind of terrain you can imagine and yet despite every punishment they endured, not only are they OK, but they’re still looking and feeling as though they’re new. This Salomon Speedcross 5 review documents every single thing I put them through and if you’re considering getting these shoes, read this first.

Update: At this point in time I’ve run 100’s of miles with the Salomon Speedcross 5’s and the overwhelmingly positive review I have here is only solidified with the additional miles I’ve put on them since (further reinforcement of how awesome they are).

I’ll showcase that in a moment, but for now, let me give you my rating for these trail running shoes:

My rating for the Salomon Speedcross 5: 5 out of 5

Get the Salomon Speedcross 5 shoes here.

I also did some research on Salomon Speedcross 5 reviews:

This shoe is very popular so you’re bound to find reviews all over the place, but I’ll give you some which hold the bulk of them:

1) Amazon has nearly 6,000 positive reviews on the Salomon Speedcross 5.

2) The Salomon site also has a lot of them (not as much as Amazon though).

3) The REI site is also one where you can find them.

Overall, across the board, 95% of the reviews I’ve seen on this shoe are VERY positive.

Here’s my full review of the Salomon Speedcross 5: 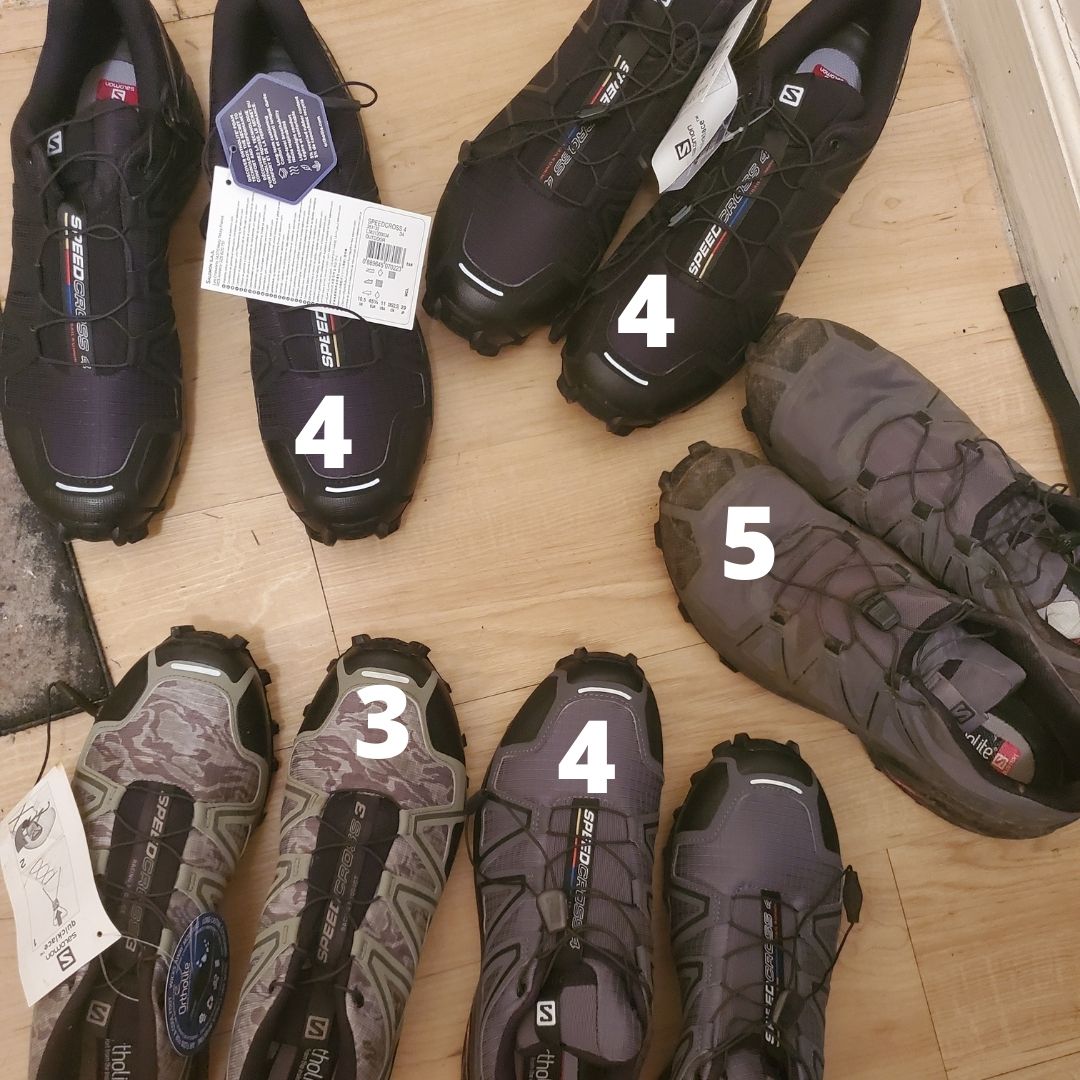 When it comes to trail running shoes, I have never felt the need to own anything other than Salomons. Why? Because every single pair I’ve gotten has exceeded any expectations I have had and the 5 is no different (but more on that later).

The only other trail running shoes I’ve bought and used is the Merrell Moab Speed hiking shoe, which I got on a whim due to literal desperation (I had no other choice).

They’re great too, but there’s a reason I continue to get and use the Salomon’s for most of my hikes and trail runs (let’s get back to the review).

I also own (don’t mock me) 3 pairs of the Salomon Speedcross 4’s and love it as well.

So why did someone like myself who has a closet full of fresh Salomon trail running shoes get the 5? Here’s what happened:

First, I had a major trip coming up where I would be doing A LOT of hiking, trail running and going through tough and dangerous terrain.

Second, I had considered using one of my pairs of the Salomon 3 or 4’s, but I’ve heard so many good things about the 5 that I just needed to see if the hype was real.

Third, I had been doing a business trip one day (several days before my major trip) and saw an REI store. I went in just to see what was there and saw the Salomon Speedcross 5 on the shelf. It was calling my name and I just decided that this was a sign. I figured it was the right time and the trip I’d be on would be the perfect test for them.

Here’s what I put the Salomon Speedcross shoes through (I really don’t know how they’re still as good as new):

There’s at least 60 miles of hiking that I did over a 2 week period, which may not seem like much to some, but the different terrains I was in were so mixed, harsh and beating up the shoes that I thought for sure something would crack before the end of the trip. To my shock, it didn’t, but anyway, here’s what happened:

1) First, I explored over 20 miles of hiking trails in Sedona, Arizona: 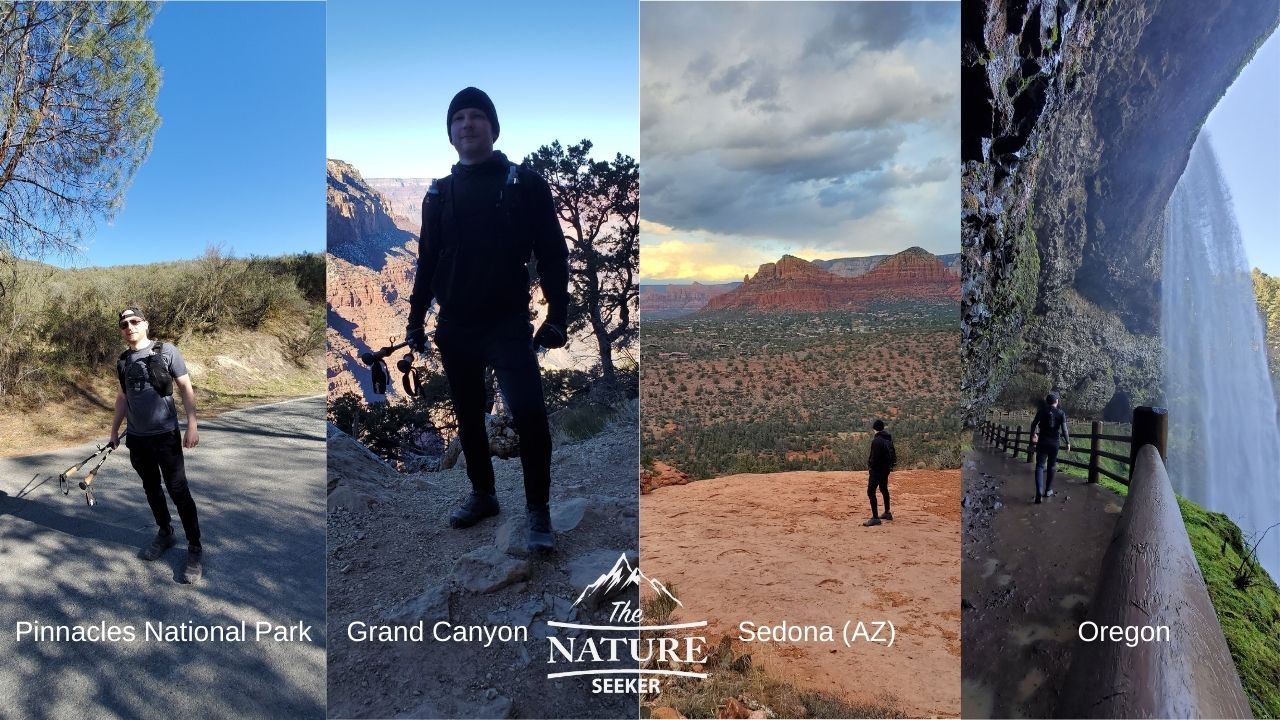 And if you’ve ever been there, you’ll know there are several distinct features this area has that are perfect testing ground for such shoes:

2) Next, I explored the South Kaibab trail in the Grand Canyon:

I didn’t do too many miles there because it was icy, and I was injured from all the running I did in Sedona. In this case, the Salomons did OK, but on ice, no shoe can withstand the slippery spots.

2) Next, I explored snowy and watery terrains in Utah. 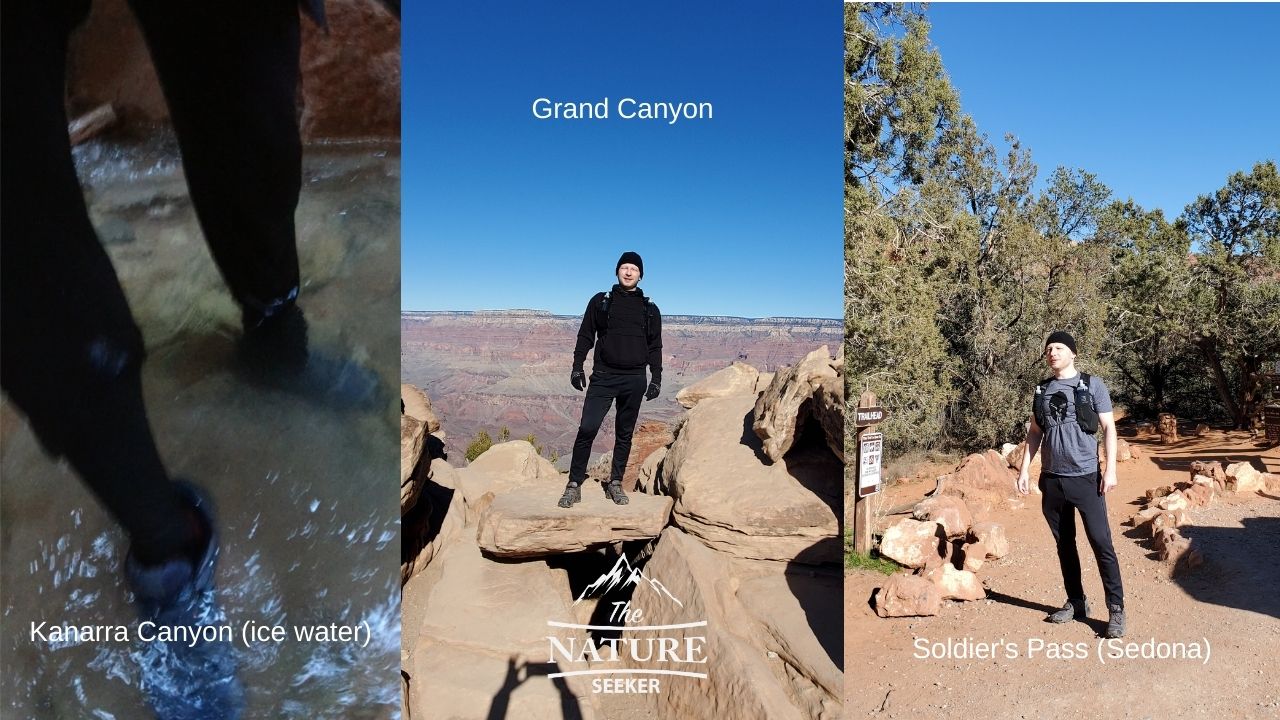 I also didn’t do too many miles there, but here’s some notable spots I checked out:

I explored Zion National Park (once again) and much of the terrain there is similar to Sedona, except I did get much more wet there.

For the most part, the shoes performed well. The only time you should worry is if you step on ice, slippery rocks (not all rocks are slippery there) and wet wood.

I also explored some areas of near Bryce Canyon National Park, a lot of which were snowy. I’ll tell you what, trail running in snow with these shoes on rocks!

Finally, I also explored a popular area known as Kanarra Falls which involves a canyon hike (in water) to reach a popular ladder/waterfall area. Since this was in January, much of the water in the canyon was iced up and I had to walk through literal ice, as well as ice water to get to the spot I needed to reach. The shoes performed well most of the time there (aside from the literal ice walks I did).

I did a super cool hike there called the Chasm of Doom which involved a lot of climbing in between rocks and these shoes rocked it. There were MANY areas in that hike where if I slipped, I could have risked major injury or even death, but at NO point did the Salomons fail me.

It is also true that many of the rocks in Joshua Tree have pretty good grip on them, but no other park on my trip beat me up (or the shoes) more than Joshua Tree did. And yet they were fine (I however am a different story).

4) Then I explored Pinnacles National Park:

There is a lot of mixed terrain at Pinnacles National Park, from cave hiking, to regular wood hikes and climbing rocks. In all these circumstances, the Salomons over delivered.

5) I also did a bit of hiking in Lake Tahoe afterwards:

Snowy environments again and once more, the Salomons did great!

6) Then it was the Northern California coast:

I explored Fern Canyon and a few other spots like Fort Bragg (again) and whether it was sandy beaches (which is fine for any shoe) or slippery rocks and spots in Fern Canyon, these shoes did very well!

7) Then it was a lot of hikes in Oregon (yes this was all done in 1 trip folks): 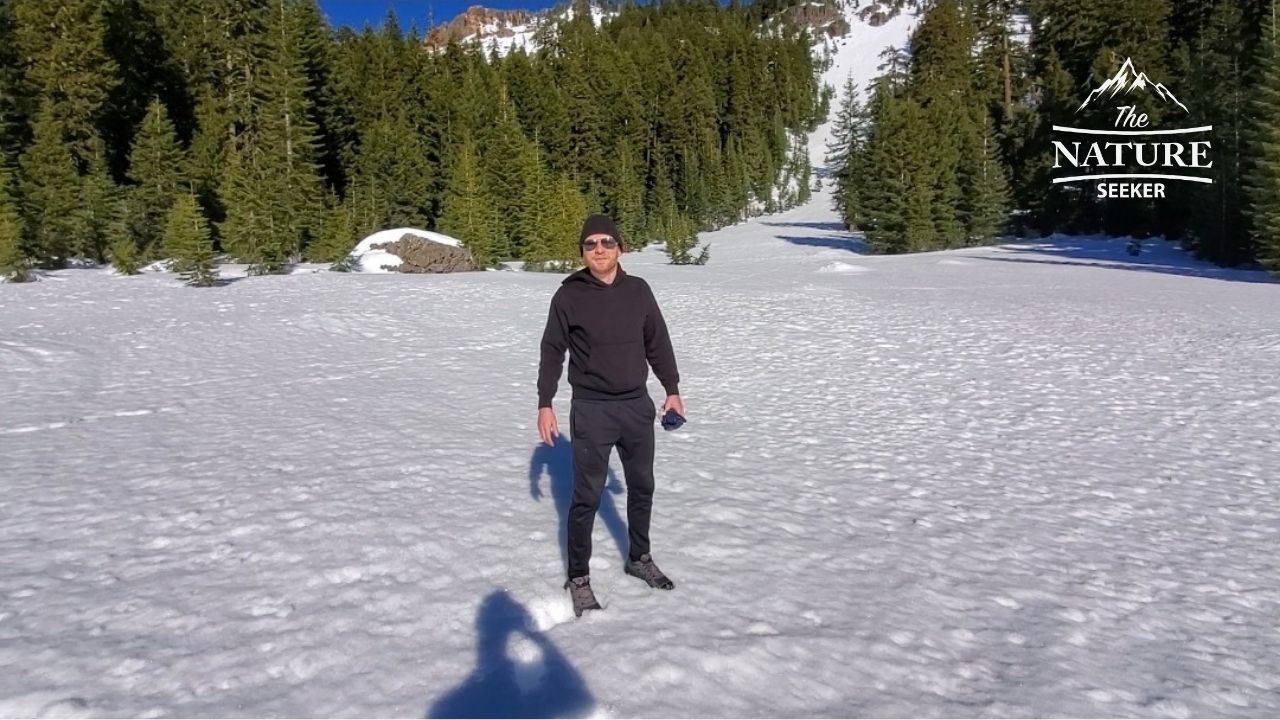 I explored a lot of waterfall hikes in Oregon and did about another 10-20 miles there easy. You can guess what type of terrain there was there, but I’ll make it short:

Muddy terrains, icy spots, wet areas and more. In all circumstances except the icey/slippery rocks, the Salomons did great.

I also did a little bit of hiking in Crater Lake National Park (where this photo was taken). Lots of snow there and these shoes still performed very well.

8) Update: Dozens and dozens of miles racked up trail running and hiking in upstate New York.

Since I’ve returned from my trip, I’ve had a lot of time to further rack up many more miles on the Salomon Speedcross 5’s, and I’m talking 100’s more. Where I’ve mostly hiked and trail run since my return are:

With the 100’s of miles on these things, I have to say they show NO signs of slowing down or the soles rubbing off. I’m still actively and confidently using the same exact pair that I purchased when I went on my long trip earlier in the year.

After all is said and done, here’s how the Salomon Speedcross 5’s perform in the following terrains:

Side note: I did A LOT of hikes in very cold water (even ice water). The Salomon Speedcross 5’s I own are not waterproof but the way I overcame this problem was that I wore the following waterproof socks:

Because of this mix of great trail running shoes and great waterproof socks, I don’t even need to get myself the GTX version of the Salomons (that shoe is waterproof).

Salomon Speedcross 5 vs the 4 and 3 (is it really that much better?):

To be honest, I didn’t see or feel much of a difference between the 5, and the other pairs I own (the Salomon 4 and 3). I will say ALL of these shoes have had all the same pros and cons as I listed above.

But in terms of specific differences, I’m sure if you dig into the details, you will likely find some microscopic improvements in the 5 over the 4 and 3, but in my honest opinion, you can’t go wrong with any of these trail running shoes.

Note: There is also another shoe I recently reviewed, the Salomon Men’s XA Pro 3D GTX Trail Running Shoe, something you may want to check out too (I think the Speedcross 5 is better).

Is Salomon Speedcross 5 good for hiking?

Yes I actively use the Salomon Speedcross 5 for both trail running and hiking mixed together.

The regular Salomon Speedcross 5 is not waterproof. If you buy the GTX version of the same shoe, that will be but I recommend the original because it gets better ratings overall. 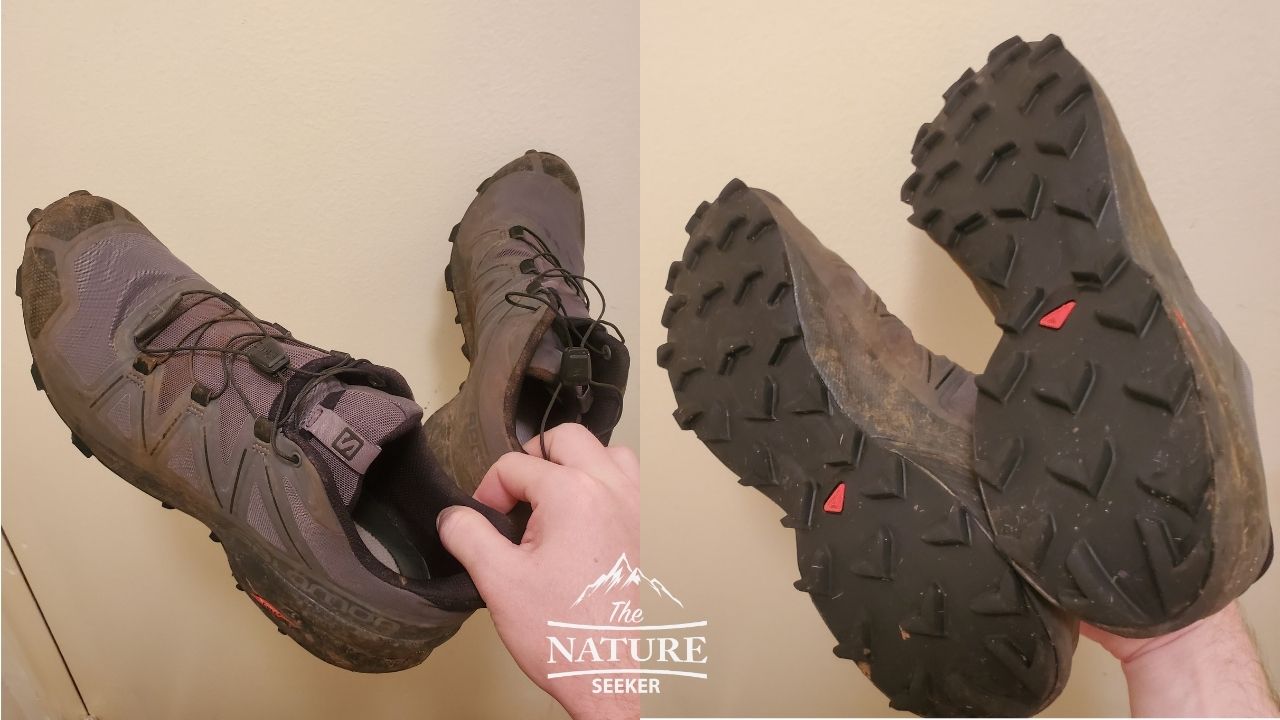 I really wasn’t kidding when I said I put these trail running shoes through everything you can imagine.

And after it was all said and done, like I said before (and I’m still shocked as I type this), they are not only fine, but they don’t even look like they took much damage. Have a look:

Me personally, I am VERY happy with them, so much so that I just might go ahead and get a new pair to keep around and probably never use (just like I did with the Salomon 3 and 4). But that’s my personal thing and you can choose to stay on one pair if that’s what you want.

I can tell you with 100% confidence that the Salomon Speedcross 5’s are worth every penny and more.

14 thoughts on “I Can’t Believe They Survived! My Salomon Speedcross 5 Review”