Planning to visit Bay of Fundy for the first time and want to know what to see or expect? I’ve been there.

I visited this place during a 5 day eastern Canada road trip and I have to say, the resources I found on this spot were confusing at best. I went in blind to explore Bay of Fundy and wasted a lot of time figuring out where everything was and what to see, and now in hindsight, know about it, what it looks like and where the best spots are, which is why I wrote this article.

Here’s the 7 things I recommend trying and exploring at Bay of Fundy:

Bay of Fundy has a lot more things you can do there, but these 7 really encapsulate the most popular things people do when they go here.

And I’ll be showing you the locations of these places so you can get to them right away (without having to look for them like I did when I went there).

Bay of Fundy and common things people ask about it:

What is special about Bay of Fundy?

The main reason Bay of Fundy is so popular is because of the high and low tide levels that happen there. Aside from this, it is also a beautiful area of eastern Canada to explore.

Is Bay of Fundy worth seeing?

Yes, the main attractions in Bay of Fundy are the incredible tides, sea caves, scenic spots and more!

Where is Bay of Fundy and why is it important?

Bay of Fundy is located within 2 provinces in Canada which are Nova Scotia and New Brunswick and it’s important because of the trade routes and tourism opportunities it offers.

What is the closest city of the Bay of Fundy?

There are actually many towns and cities surrounding Bay of Fundy but St. Johns is the biggest and where you may want to stay at if you intend to explore this area.

Here is a map of Bay of Fundy: 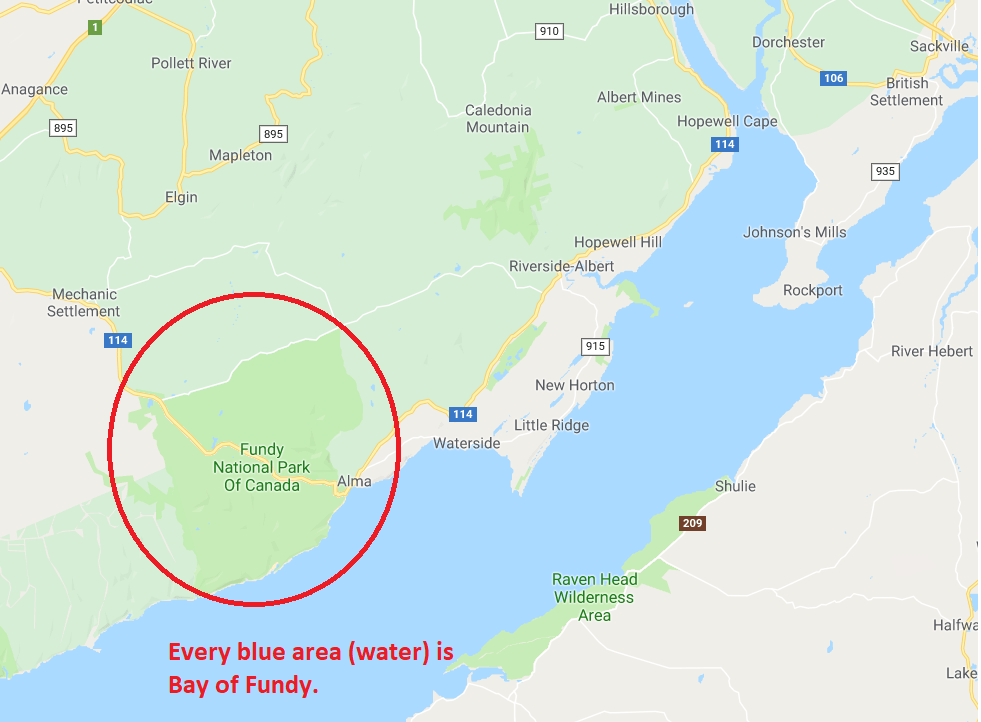 Let’s go over the list of 7 things to see at Bay of Fundy:

First, I’ll start with the most iconic spot:

Hopewell Cape is the location that most people will see if they Google “Bay of Fundy” but when I came to this area, I had no clue where to find it.

I had to ask locals and eventually got a map to find it.

Here is an image of Hopewell Rocks (Also known as Hopewell Cape): 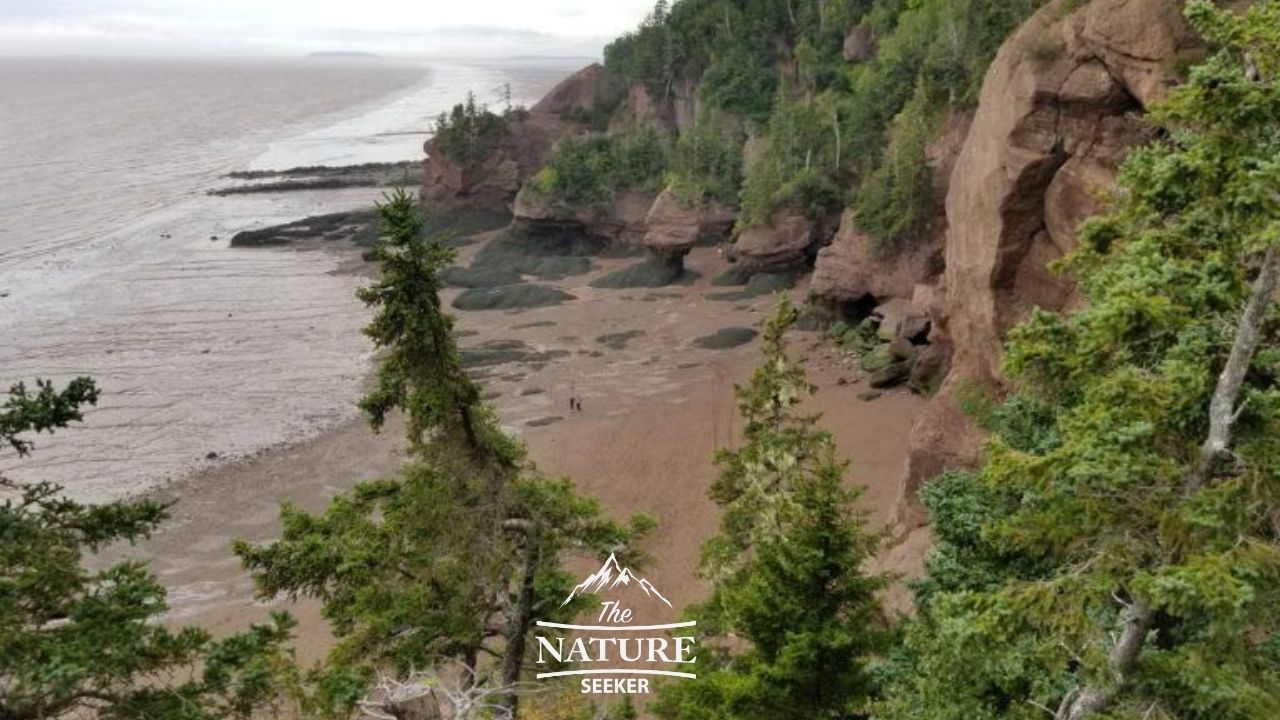 This area is within Bay of Fundy, but towards the eastern most part of it basically and that’s what you need to know to get there (besides a map which I’ll show you shortly).

I find it annoying that there’s very little info online about this and I had to do a lot of on the ground research to actually get there. Oh well.

And here is the exact spot where you can find Hopewell Cape (on a map).

Because of bad information that I got when researching it, my friends and I lost at least 2 hours figuring out where it actually was.

We were on route 2 (the main highway in Nova Scotia), figured we could see this spot in Fundy National Park, went off the path, down to the park, only to be told we had to go another hour north east to actually see this spot (and it’s outside of the park).

So if you intend to see Hopewell Cape (and I highly recommend that you do), make sure to use the above map listing to get there right away.

You can also pick up a map of Bay of Fundy when you enter Fundy National Park and they also display a map and where to find most popular spots in the entire bay on it.

2) Try doing the whale watching tours (yes, Bay of Fundy has this): 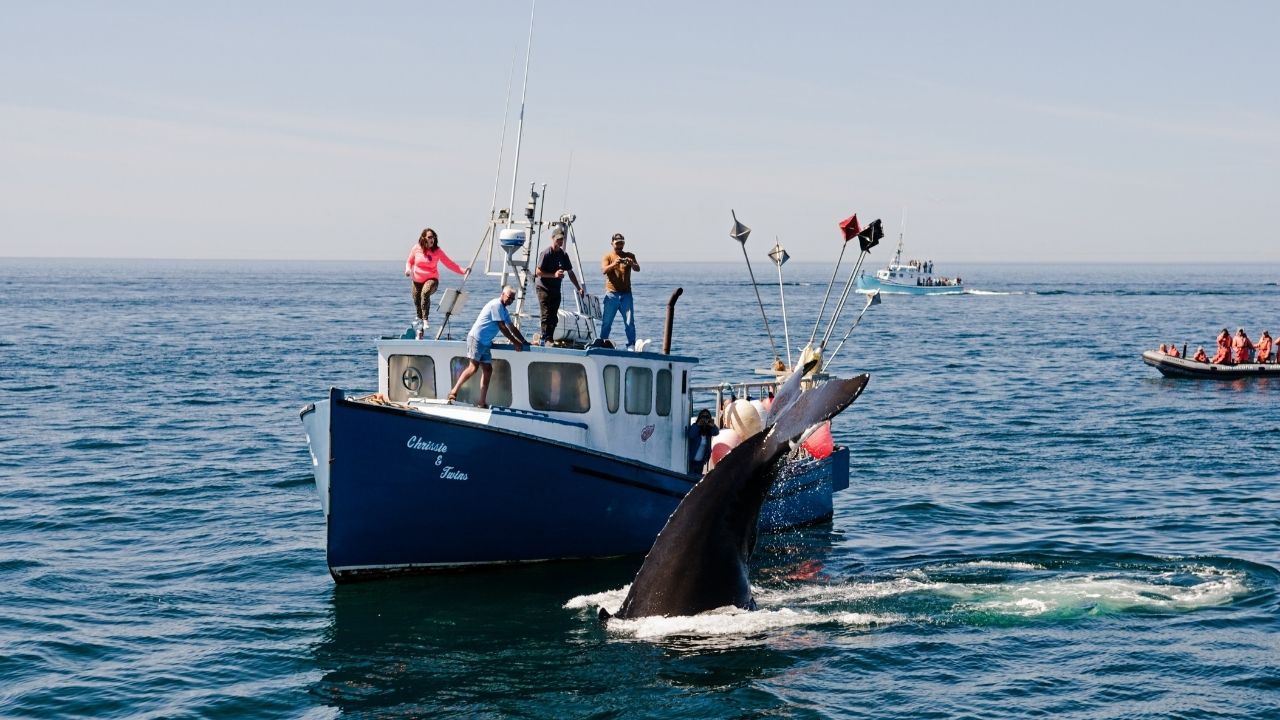 Bay of Fundy is well known for having a lot of whales swim through it.

There’s multiple boat tours you can take since this region is so large.

Depending on where you are located and how much time you have, you can choose this option or the Cabot Trail one (I believe the Cabot Trail has more places to see them).

3) Witness the high and low tides (they are the biggest in the world): 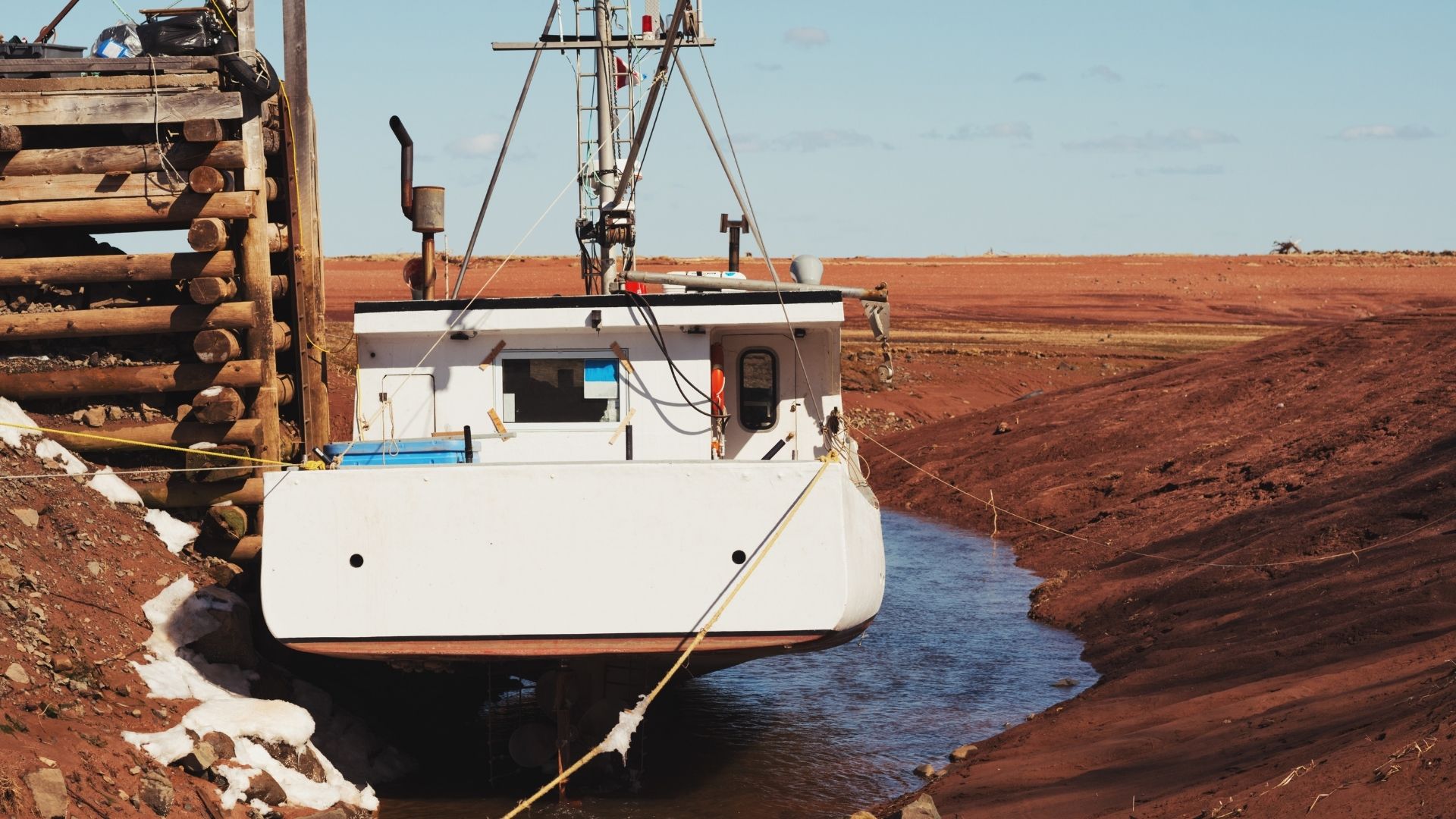 This area in Nova Scotia is very well known for having the biggest high and low tides you’ll ever see and I can confirm this since when we landed on the coast, it was during the low tide period and you could see that the water fills in at least a kilometer inland.

The above image of Hopewell Rocks is also famous for this as when the low tides kick in fully, you explore the beach and rocks fully, but when it’s high tide, you can’t, but can kayak there to get another view of the land.

But what you see in the image here (the boat) is very common to witness as when the low tides do happen, they are so extreme that it feels like a massive drought came through, and this happens every single day there. 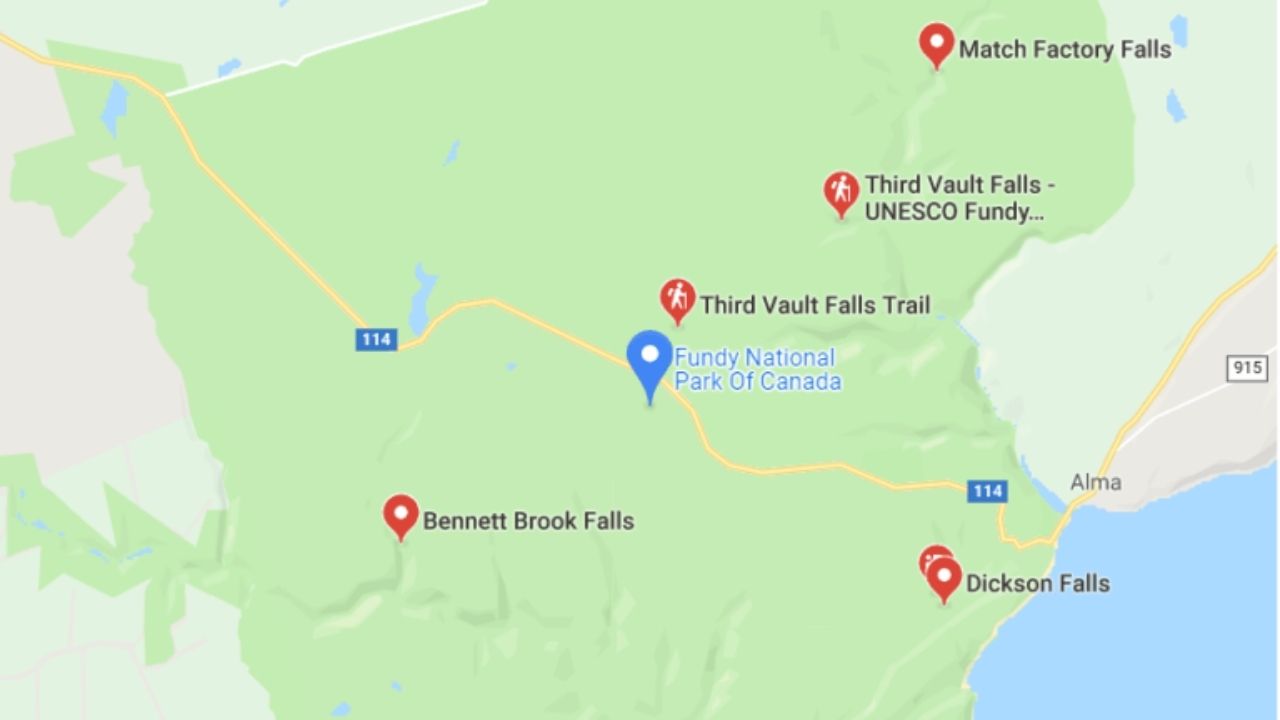 The bay itself isn’t the only scenic thing to see. The giant national park is itself also a treat to check out.

Because we didn’t have much time (we really wanted to see Hopewell Cape!), we had to skip the many waterfalls in this location, I’ve included a map of the different waterfalls you’ll find at Fundy National Park:

The scenic drive through this park for us was a bit dull, but some of the views at the park were interesting to stop at. Deeper into the park where you can check out the many waterfalls it has to offer would be where I’d go if you’re interested in doing that.

Many trails leading to the waterfalls there have their own man made hiking trails for easy walks, while others require moderate hikes.

But if you are into waterfalls, and you’re already planning to visit Bay of Fundy, adding them to your list of places to explore would certainly decorate your trip further. 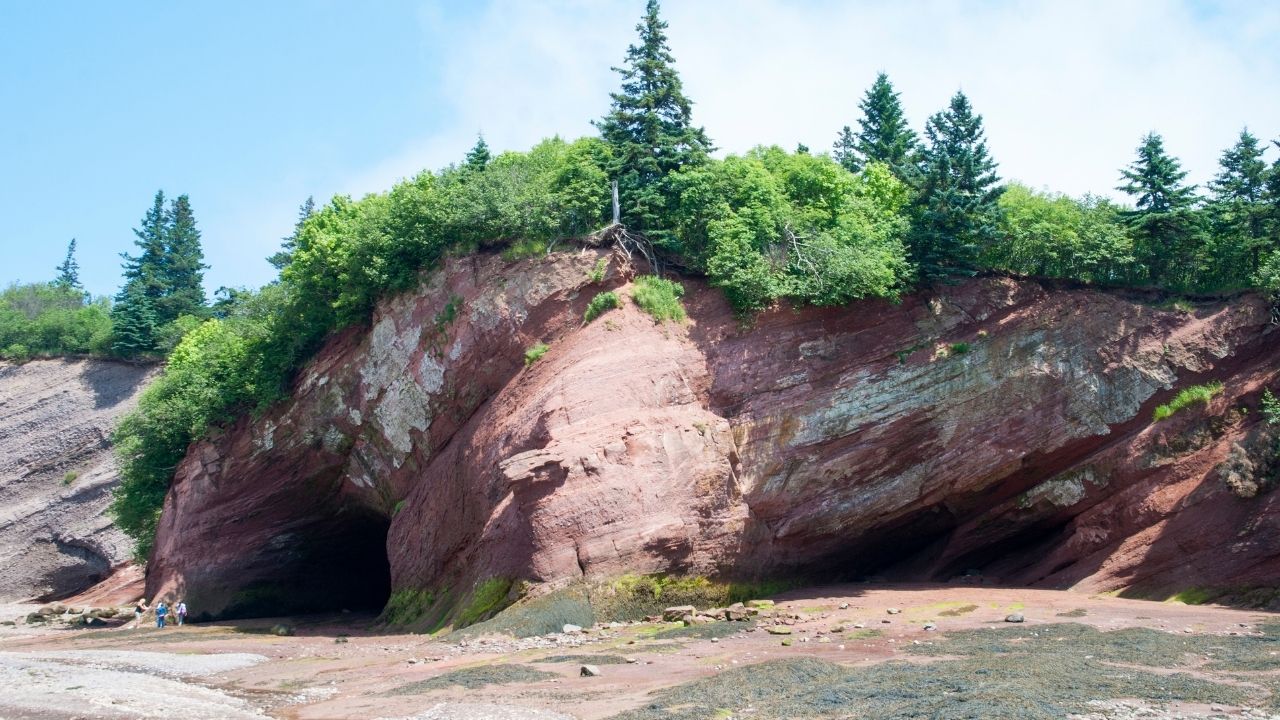 There is an iconic sea cave west of Fundy National Park park known as St. Martins Sea Caves and it’s right on the coast, but it is about an hour drive west of the park:

As you can see, it’s directly opposite of Hopewell Rocks, so we had to decide on only seeing one location (we had to make the Ferry to go see Gros Morne National Park).

And so, because we had to go further north east, Hopewell Rocks was the deciding location for us to visit, while the sea caves would have to be put on hold.

But if you’re visiting this place for a few days, then you can definitely check them out.

From what I know seeing other sea caves at places like Cape Flattery, which are on the Washington Coast, these are also very beautiful and even accessible during the low tides.

6) Do the scenic drive along the Bay of Fundy coast: 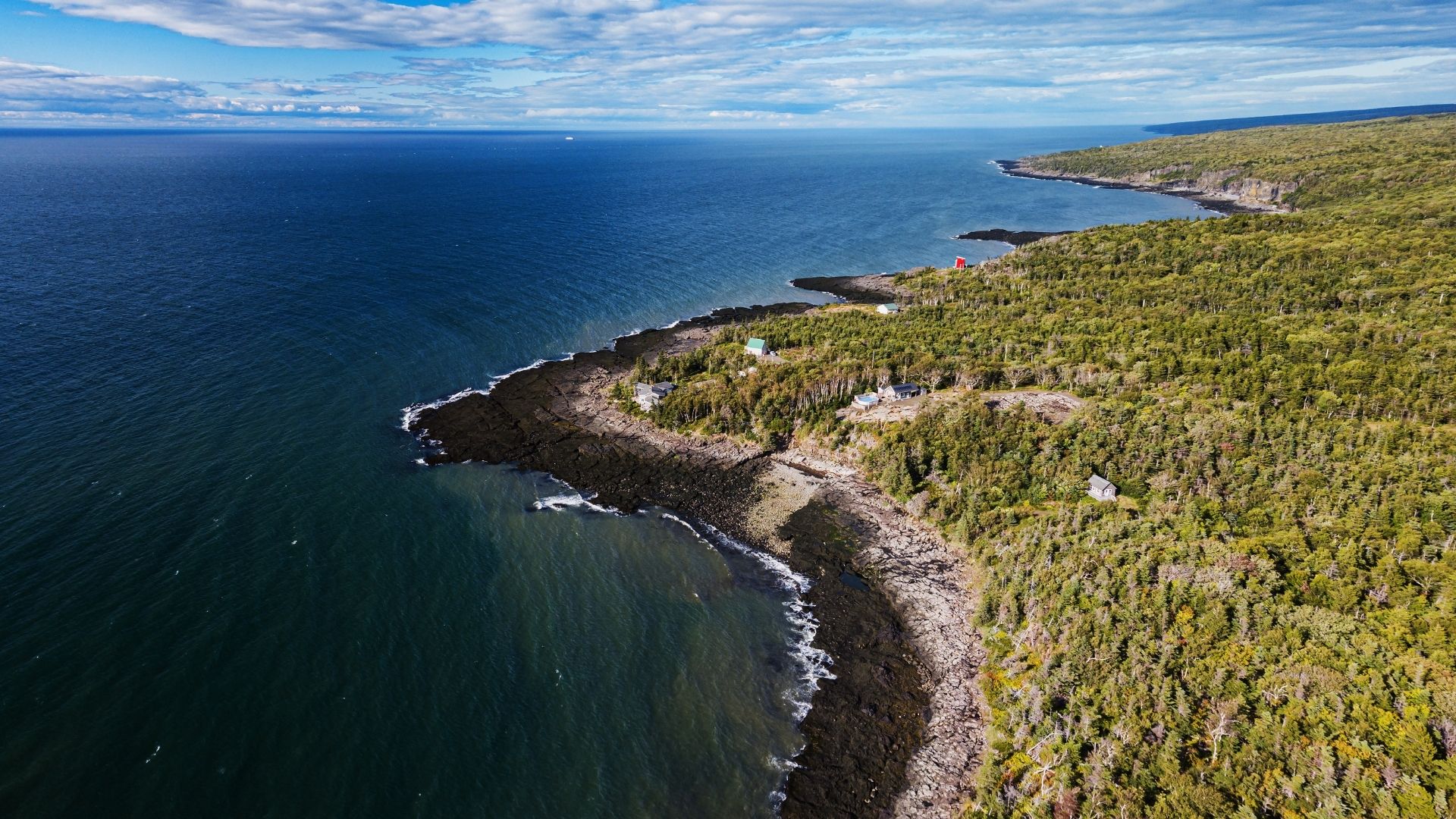 Even though we were disappointed to know that we had to drive another hour to see Hopewell Rocks (Cape), and skip the sea caves, the silver lining was that we got to do so while taking the scenic route and seeing most of Bay of Fundy.

It’s a great drive and you will see a few towns, beautiful beach views (especially during low tide) and there will be plenty of opportunities to take pictures.

And I have another option if you are staying in Nova Scotia for a little bit longer: The Cabot Trail, it’s another awesome, scenic drive along the northern and western coast (road 114).

Additionally, if you have the options to travel anywhere, I always advise checking out the Pacific Coast Highway drive. That one is more beautiful than any of these options (but still, the east side of Canada is gorgeous too).

And just as well, I also recommend the North Shore and South Shore, aka the Upper Peninsula of Michigan if you love scenic, coastal drives. Both these options are in my opinion also better than Bay of Fundy (and they also have sea caves).

7) The Fundy National park itself has many picnic and camping areas: 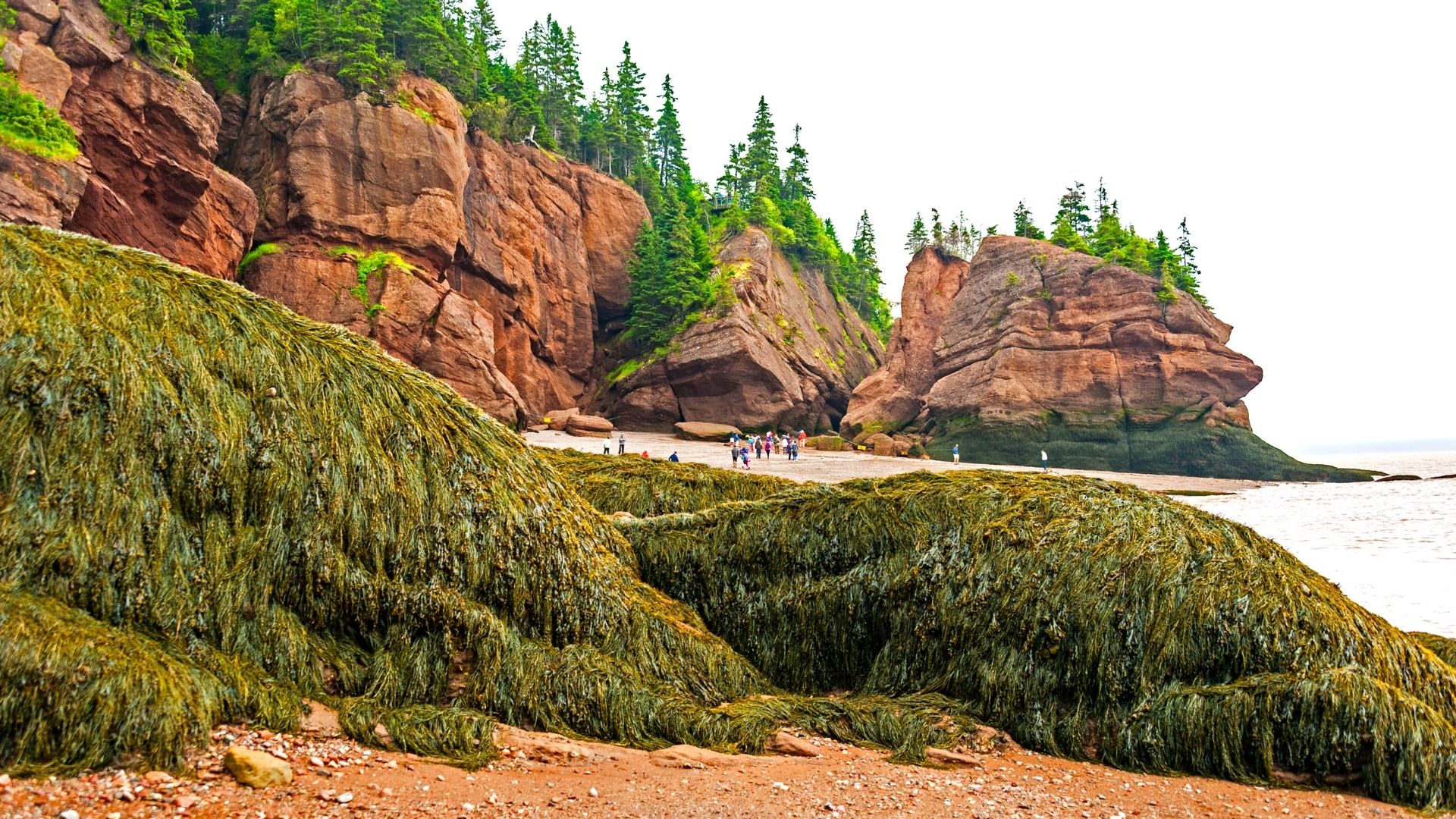 If you love nature but aren’t really active in it like we were, you have the option to camp out and picnic in the park, which itself is huge. It has plenty of areas you can stop at (including scenic areas).

One more piece of advice before you visit Bay of Fundy:

My advice would be to fully understand just how bad the directions are to this place (because they literally clump all the locations I listed into one name which is Bay of Fundy, and it confuses people!) and to make sure you use this article to identify where in this large area you wish to go.

Like I said before, if you wish to enter this spot through the park, I highly advise that you pick up a map at the ranger station and ask any questions on any spot you wish to see, so the ranger can mark it down on the map for you, so you don’t get lost later.

Because we didn’t do this, we had to make more frequent stops to ask locals where to go, which wasted time and forced us to then hurry to reach a ferry to get to Gros Morne National Park.

Other places to see around Bay of Fundy:

If you have a few extra days to explore eastern Canada, here are other places you can visit nearby Bay of Fundy: