I have to admit, when I first traveled through it, I didn’t expect that there were so many things to do in the Upper Peninsula of Michigan and in hindsight, I wish I stayed around this region longer to do just that. But never the less, I did see a lot and in this post, I want to share 7 of the best places to see there.

My short road trip through the Upper Peninsula of Michigan: 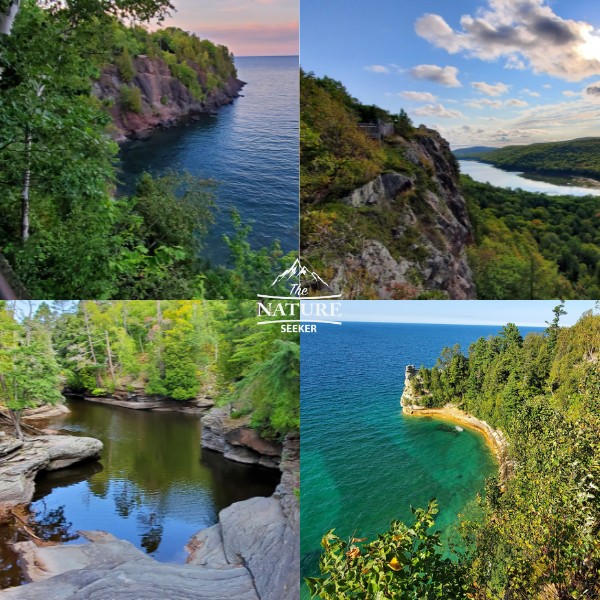 I only had 2 days to explore this beautiful area and again, I had no idea it had so much to offer.

Originally all I thought that there was to see in this area was the amazing Pictured Rocks National Lakeshore, which is why I was traveling through the Upper Peninsula in the first place (my main goal on that road trip though was to travel to the North Shore of Minnesota).

But after exploring Pictured Rocks personally (and it’s one of the best places on the list), I quickly discovered that there was way more to check out.

And while I had the opportunity to see way more than just this place there, I still missed a few spots that I later learned existed.

And because of my experiences there (and the missed opportunities), I compiled the complete list of the best things to do in the Upper Peninsula so you don’t just get to see the same amazing places I did on my trip there, but just as importantly don’t miss out of the other amazing spots I did!

Here are the 9 most beautiful places in the Upper Peninsula of Michigan to see: 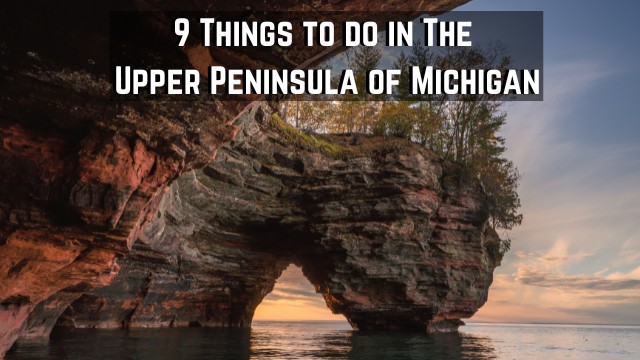 I was able to see 6 of the 9 places on this list of the most beautiful places in the Upper Peninsula of Michigan and while I did rush through the area, you certainly shouldn’t if you have more time than I did.

What is the Upper Peninsula of Michigan? 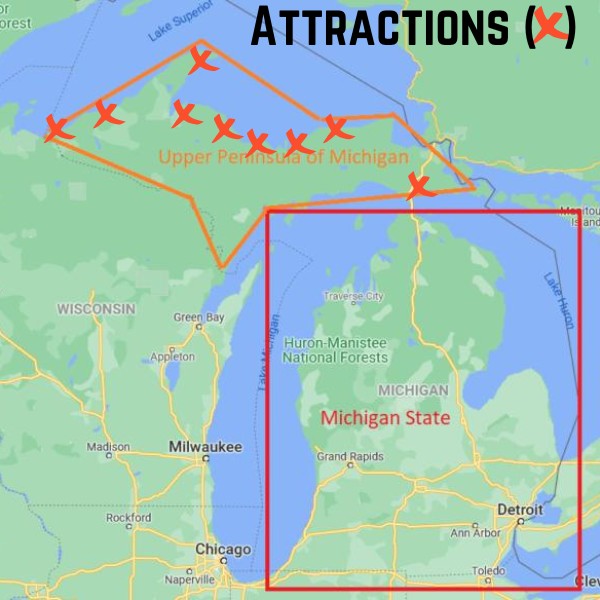 Michigan state is basically 2 areas, the southern end which most people know about and the top end which is connected to Wisconsin (map and attractions image provided).

The top end is huge and that is known as the Upper Peninsula of Michigan as you can see in the orange outline.

In that area are many beautiful areas you can explore (such as the ones on this list).

Before I get there, let me just say that the Upper Peninsula of Michigan has a lot to explore folks, not just the 9 places I’ll be sharing.

But these 9 are so beautiful that you just can’t go wrong exploring them and frankly, if you do find other awesome spots, there’s a good chance they are around the same areas where the 9 others are anyway.

So the more time you have to check out this area, the more of it that I would take to do just that.

I personally missed a lot of good spots that I mention in this post, and will be sure to make up for the next time I go here.

Now onto the list of the best places to visit in the Upper Peninsula Michigan:

I’m going to get into the details of each location on this list, how to find it and what else you need to know. We’ll start with the closest attraction you will find if you’re coming here from the south and that is: 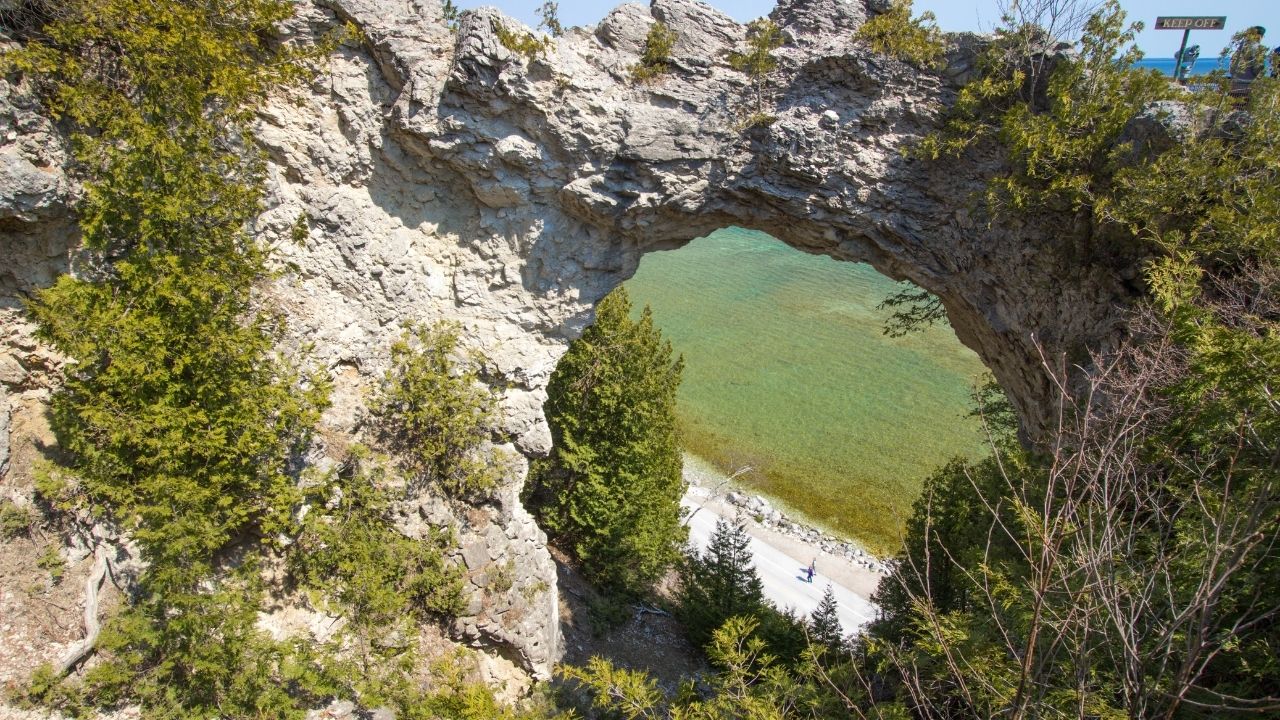 Mackinac Island is a very small island that you can access by ferry once you enter the Upper Peninsula of Michigan (from the main Michigan state itself).

It has a lot of attractions to check out, including trails, caves and so forth, but the main thing in my opinion would be Arch Rock.

In my case, I actually realized I missed this spot because I figured the main attractions of the Upper Peninsula of Michigan were in the northern end of it.

Reaching this place requires a boat though, so keep this in mind. But hopefully, you won’t make my mistake and miss it! 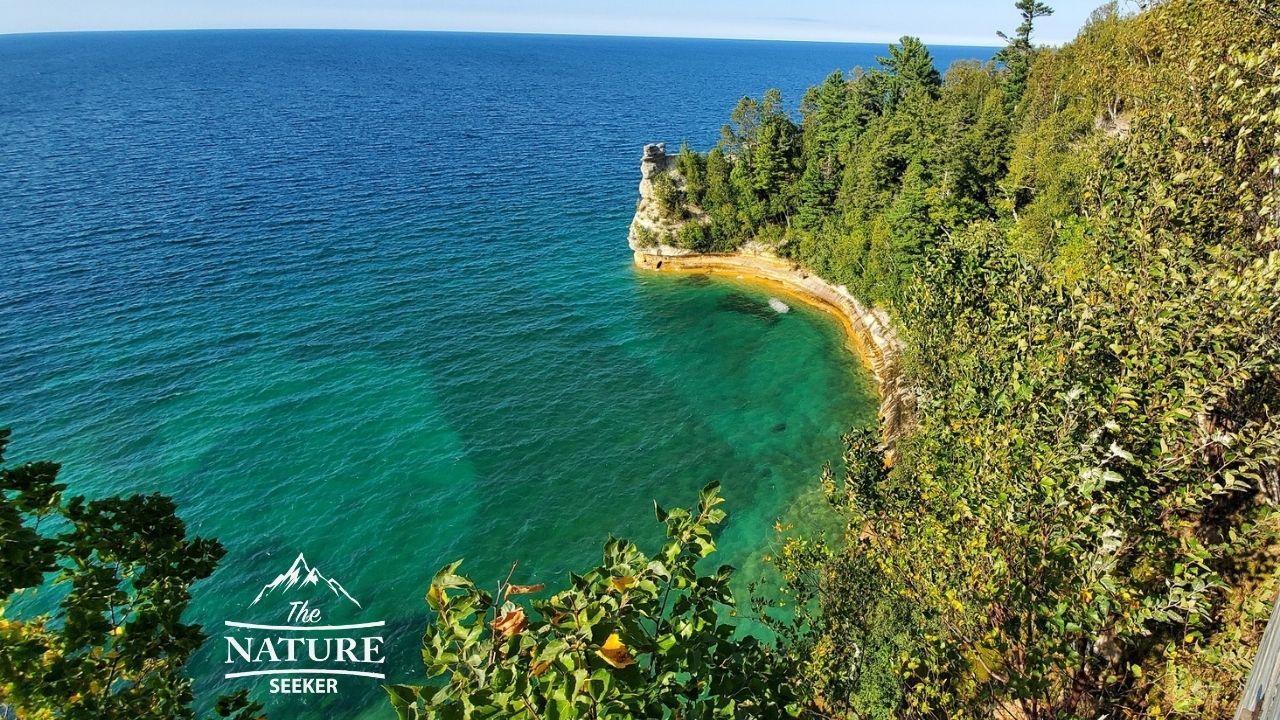 The prettiest part of the entire Upper Peninsula of Michigan has to be Pictured Rocks National Lakeshore (at least this is I thought) and it was the main attraction I wanted to see during my road trip in that area.

This is a national park area that spans for over 20 miles across the shoreline of Michigan.

On it, you will find tons of awesome things to explore, from beach waterfalls, to kayak adventures and much more.

See my post above on what to do in this beautiful park but for sure, if you visit the Upper Peninsula of Michigan, this has to be your main go to spot.

Note: This is a great area (at night) to potentially see the Northern Lights. 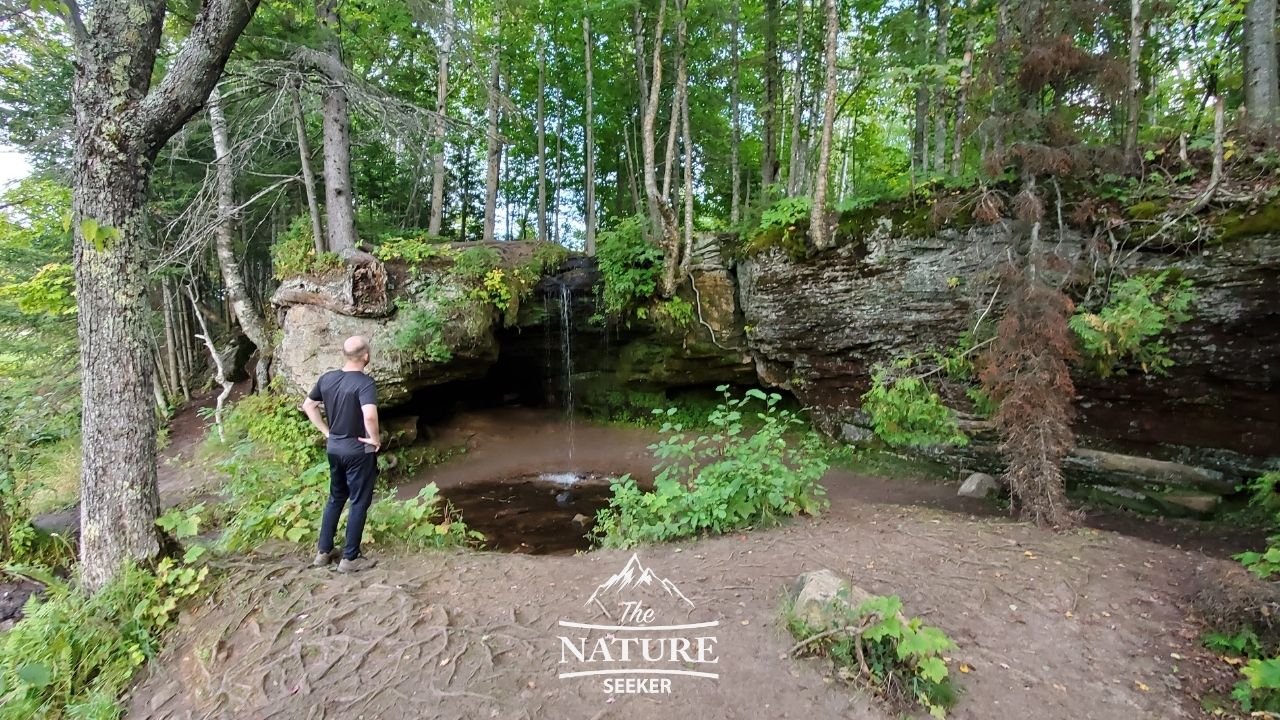 I consider Scott Falls to be a small but cool “Easter Egg” in the Upper Peninsula of Michigan.

It can be found on your GPS and is identified as “Lake Superior Historical Marker Scott Falls”.

It is a beautiful waterfall right off road 28 and it’s really easy to miss. In our case, we accidentally saw it while passing by and of course, we had to stop to check it out. A trail is available around the waterfall, but be sure to stop here.

And right next to it is a cool little beach you can also explore if you like. 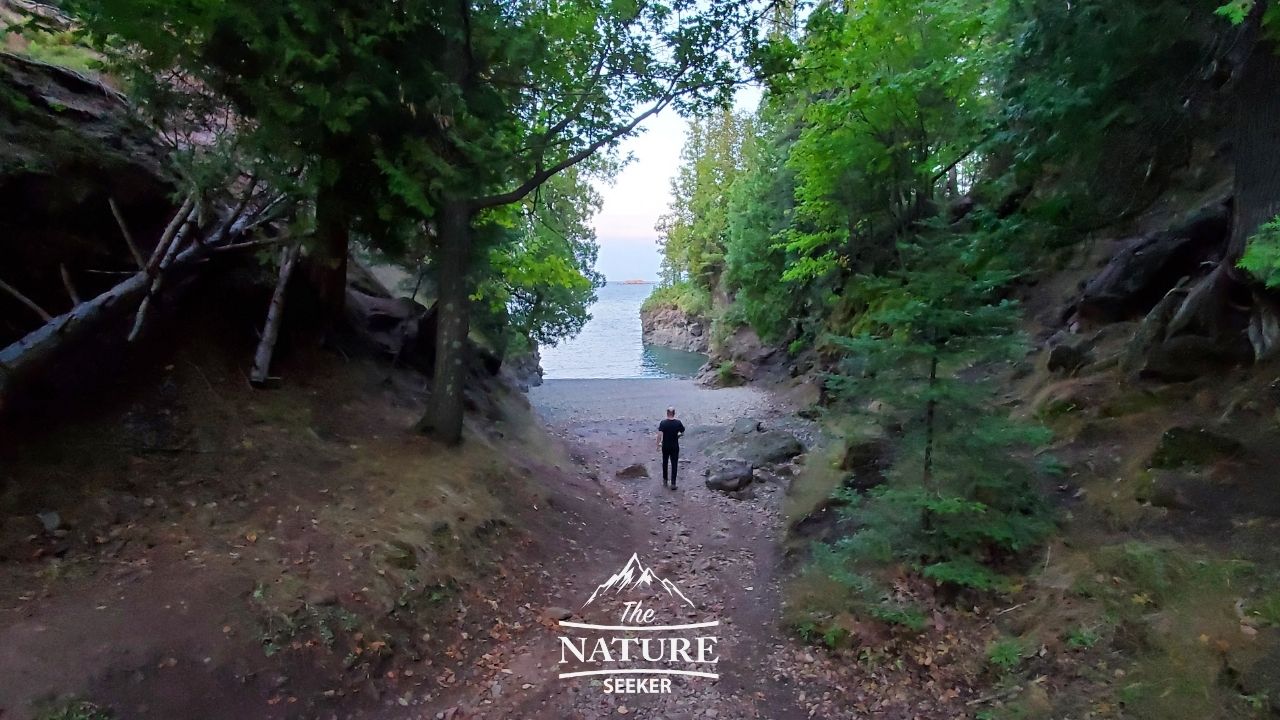 Presque Isle State Park is a very small, but extremely scenic park I highly recommend checking out. They have beaches, cliff jumps, cliffs and beautiful areas to check out the sunsets, which is when we arrived there.

We didn’t have much time, but we did get to see a number of things at this park before heading off to the town nearby to grab supper.

An interesting coincidence to note is that the picture you see above (of me by the beach) is at this park and it’s also an area I remembered seeing on Google well over a decade ago (possibly 2) and I never knew what this area was.

What an exciting feeling it was when I realized this same beach was what I had “wished” I saw all those years ago and it finally came true there and then! 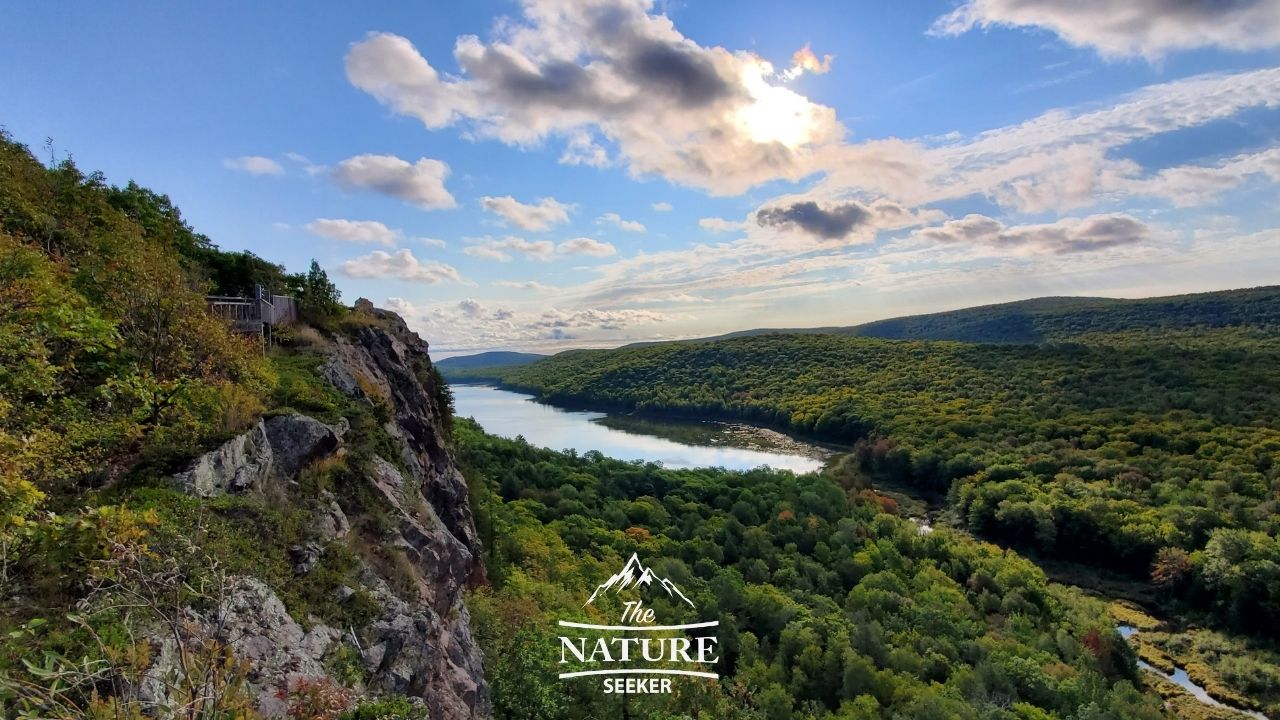 After the first day of my road trip to the Upper Peninsula of Michigan, my buddy and I stayed at a hotel in the Porcupine Mountains and in the morning explored and drove around the whole area, stopping by and checking out certain spots.

The first place we saw was a beautiful overlook called Lake of The Clouds. It’s easy to reach and quite a sight.

You just have to park in the main parking lot and walk about 100 feet to reach this overlook.

It kind of reminded me of the type of stuff I see in the Catskill Mountains (although they are bigger). 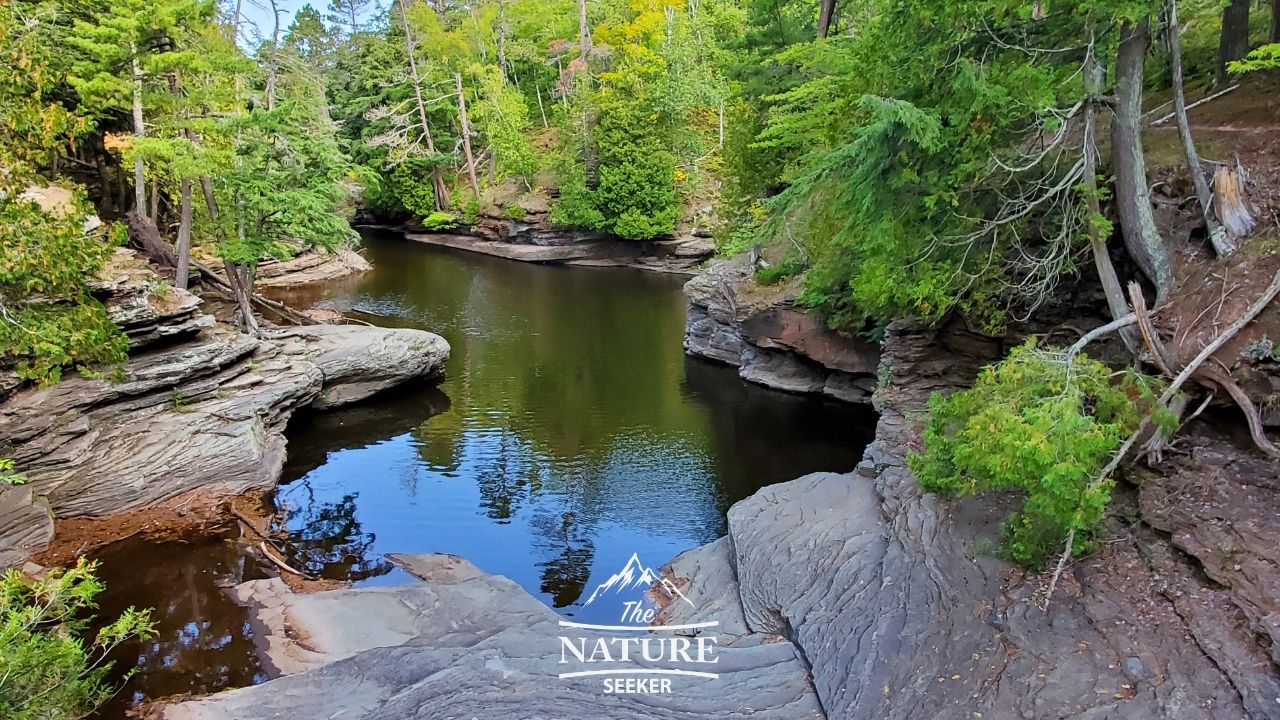 After checking out Lake of The Clouds overlook, my buddy and I drove through the Porcupine Mountains and on the way saw signs for a waterfall trail area.

We checked it out, and there was a beautiful trail to walk which took you down steps, across a beautiful bridge, arch rocks, sea caves and an awesome view of Lake Superior in parts.

This was definitely a very scenic area to check out that reminded me a lot of the Oregon Coast and somewhat of Cape Flattery (but different in certain ways).

It’s also a very interactive park because there’s so many things to do in such a small place. 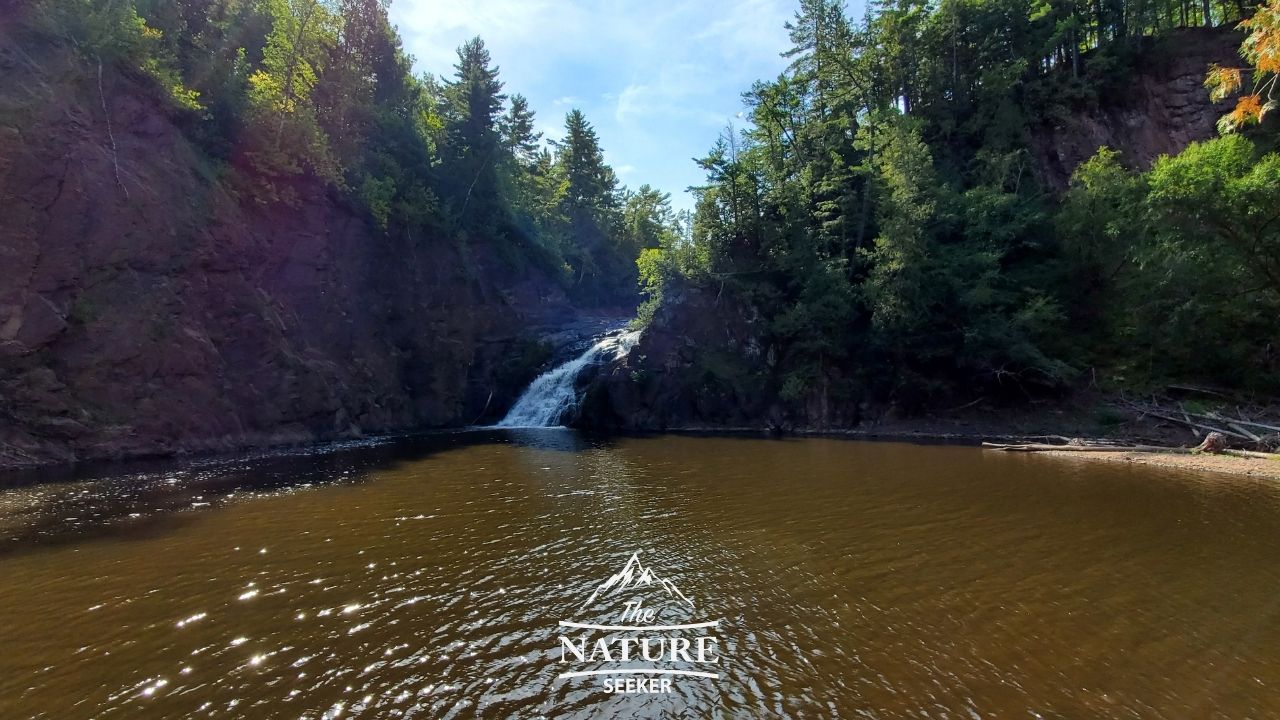 The last spot my buddy and I saw on our road trip through the Upper Peninsula of Michigan was this small, but also scenic park.

There are 2 things worth noting here that make it worth visiting:

There are giant red cliffs here (east of the waterfall) and a cool trail that takes you behind an electric station and to a beautiful waterfall with giant gorges around it.

The second trail is what takes you to Superior Falls and there are some interactive things to do there like hiking, climbing and if the water level is low enough, going over to the other side of the waterfall. 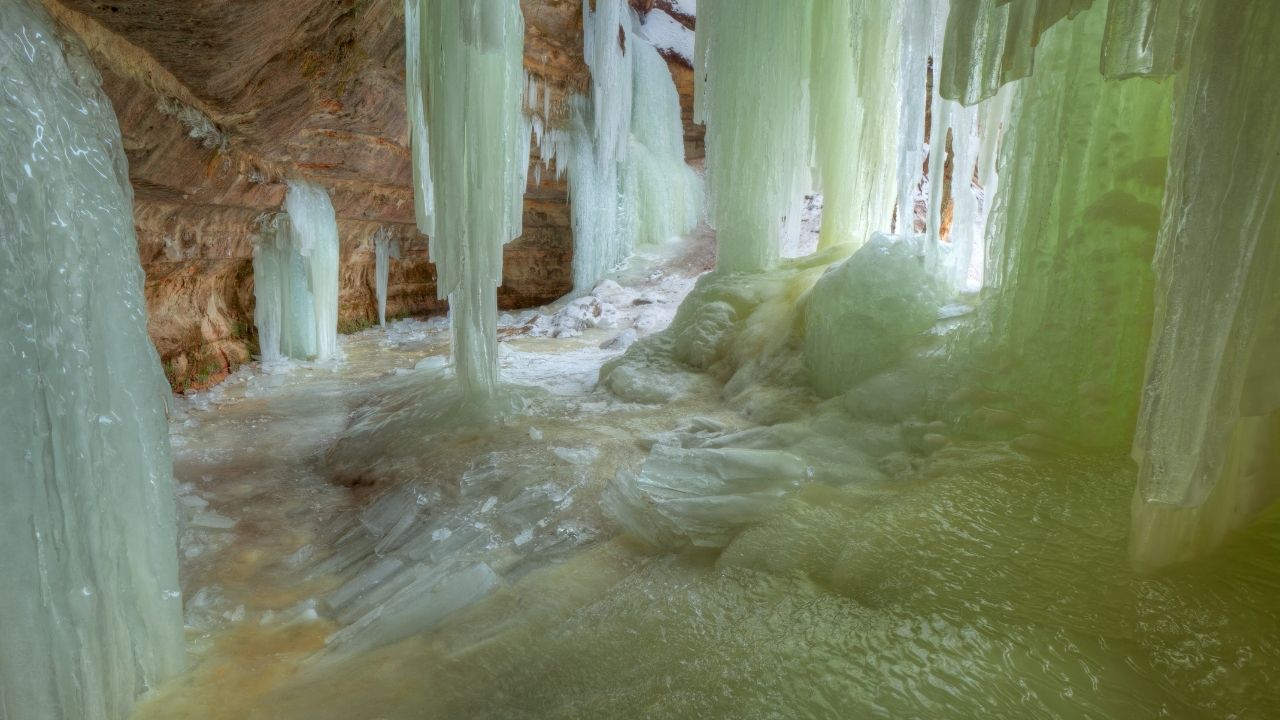 There are certain parts of the Upper Peninsula of Michigan which are best to check out in the winter time (or at least before spring begins) and one of those places happens to be the Eben Ice Caves.

It is a gorge/cave area where every year (during winter), the ice formations over it cover it up almost entirely and basically cover that cave from the outside.

There is a trailhead known as the Eben Ice Caves trailhead which will take you to this place. It’s only about half a mile to it, but it will likely be in snow covered areas.

Once you get there, the scenery is beautiful and I have also seen this area photographed at night with lights pointing towards it (or from the inside), making for amazing colors and views to check out. 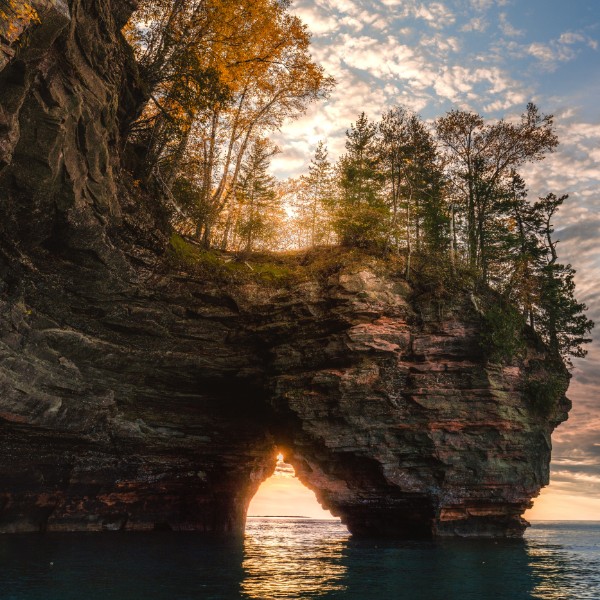 The last spot on this is officially not located in the Upper Peninsula of Michigan.

But it’s very close to the Upper Peninsula of Michigan’s border (about 15 miles away from it) and while it’s not an official spot in this region, I honestly don’t care because it’s stunning and missing it would be a huge mistake in my opinion!

For specifics, the 4 main reasons I decided to add Apostle Islands to the list is as follows:

1) This place is absolutely amazing and matches and even beats Pictured Rocks National Lakeshore in some cases.

3) It’s basically a series of many islands with sea caves, like Pictured Rocks, but there’s actually more.

The best Upper Peninsula attractions to see if you’re tight on time:

If you happen to be traveling through this area and tight on time like I was, I would prioritize the following attractions (in hindsight):

Since there’s a lot of hiking involved, here is gear recommendations that’ll really help you:

Questions about exploring the Upper Peninsula of Michigan:

What is the prettiest part of the Upper Peninsula?

In my opinion Pictured Rocks National Lakeshore is where you will find the prettiest and most amazing area of the Upper Peninsula.

What is Upper Peninsula known for?

Besides connecting with 3 great lakes, it is also known for being very scenic in it’s shore, providing people to natural bridges, great views of the south shore and even the ability to see the northern lights.

There are several cities located in the Upper Peninsula of Michigan and some of the main ones include Marquette, Ironwood and Copper Harbor.

Does anyone live in Michigan’s Upper Peninsula?

Yes there are several 100,000s of people who live across the Michigan Upper Peninsula.

Are there mountain lions in Michigan’s Upper Peninsula?

Yes mountain lions are located in the Upper Peninsula, but are very rare to see.

After my short trip through the Upper Peninsula, here’s what happened next:

While the trip through Upper Peninsula was short, my original plan was to go through Wisconsin, and then spend 3 days on the North Shore of Minnesota where I had heard the coast was stunning (and it was).

However, after traveling through the Upper Peninsula of Michigan and seeing that it’s equally as beautiful there, I will be returning to take more time to explore it and I hope this article helps you do the same when you go!