Sea caves can be found all along the Oregon Coast, but I want to share 5 specific locations where you’ll find truly stunning ones in bulk, meaning when you visit one of these locations, you’ll be able to see multiple sea caves.

Not only that, but you’ll also be able to get close to and inside most of them, and best of all, most of these locations and their sea caves aren’t exactly public knowledge, so you’ll likely find very few people who know about them, giving you the space to explore them without the crowds!

What is a sea cave?

It’s just a naturally made cave that is created by a combination of sea water eroding a hole in a rock, that creates the sea cave itself. These places can often be explored, kayaked or swam through.

The dangers of exploring sea caves (know this before going):

Sea caves can be dangerous spots to explore if you aren’t careful or time your exploration there incorrectly and it is best to just see them from a distance for your safety.

Some of the spots on this list do come with their own risks if you decide to explore them and I’ve personally had to cancel my kayaking and hiking trips through these areas because the waters were too dangerous or the tide wasn’t low enough to do it at.

Don’t be foolish. Explore a sea cave only when it’s safe to do so and if you’re not experienced, just don’t it and enjoy seeing it from a distance. The Oregon Coast has plenty of sight seeing spots to explore and hike through regardless.

Here are the 5 spots on the Oregon Coast where you’ll find amazing sea caves:

The last one is more of a tourist attraction.

But let’s get to the details of each of these spots. 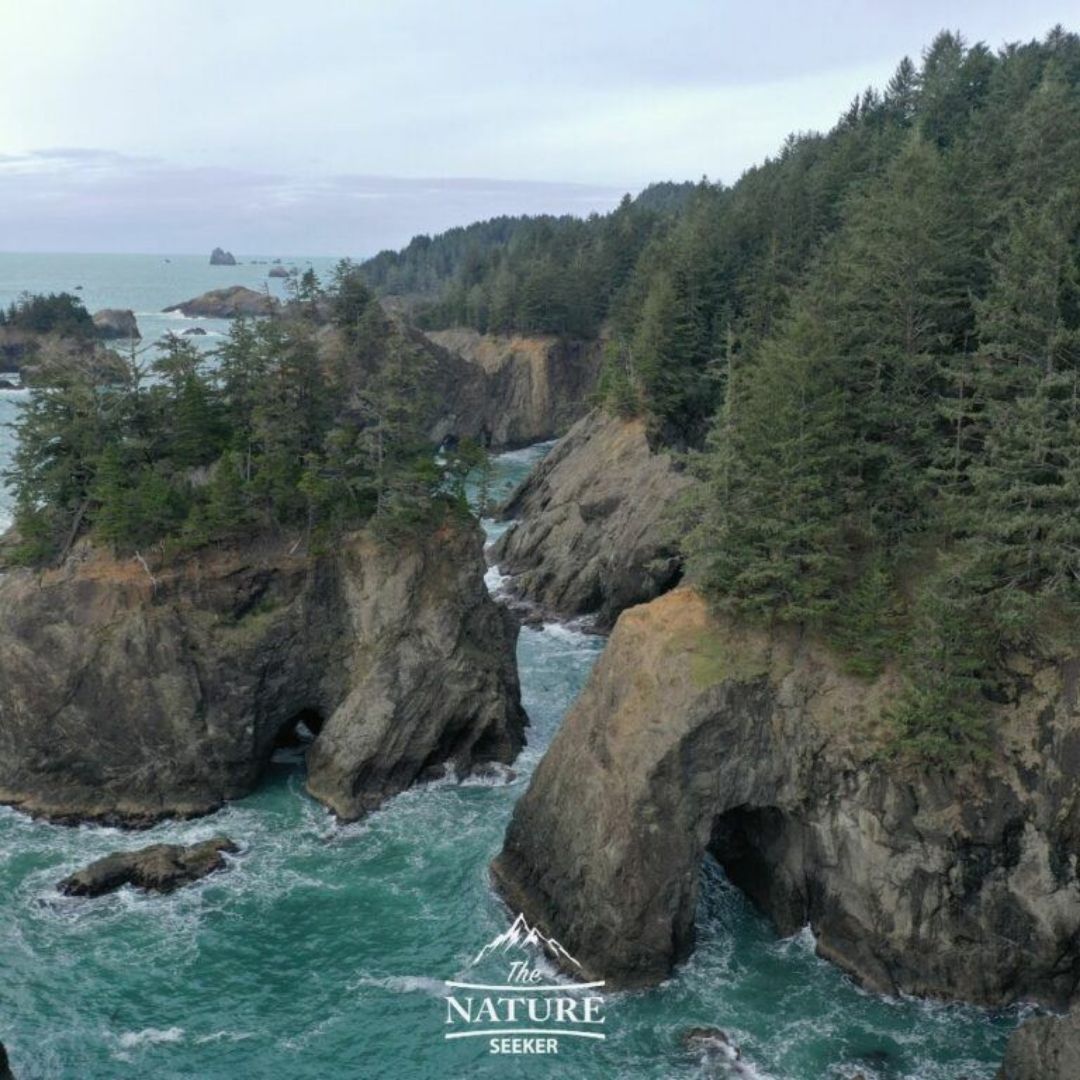 When it comes to the Oregon Coast specifically, I’ve never seen a specific spot with as many sea caves as Natural Bridges.

By my count, it’s at least 5 if not more and the picture to the right shows just a small sample of the ones you see there.

While it is open to the public, be careful if you decide to hike down there, or kayak through these sea caves which is possible too, as tides, stormy waters and more could make it dangerous to explore.

One thing you can do is enjoy the views of these caves from the top of Natural Bridges, but as someone like myself who enjoys hands on experiences, I like to get close and Natural Bridges is my favorite spot to explore, sea caves included.

The only other spots I’ve ever seen that have more sea caves are outside the Oregon Coast and here they are just in case you’re interested: 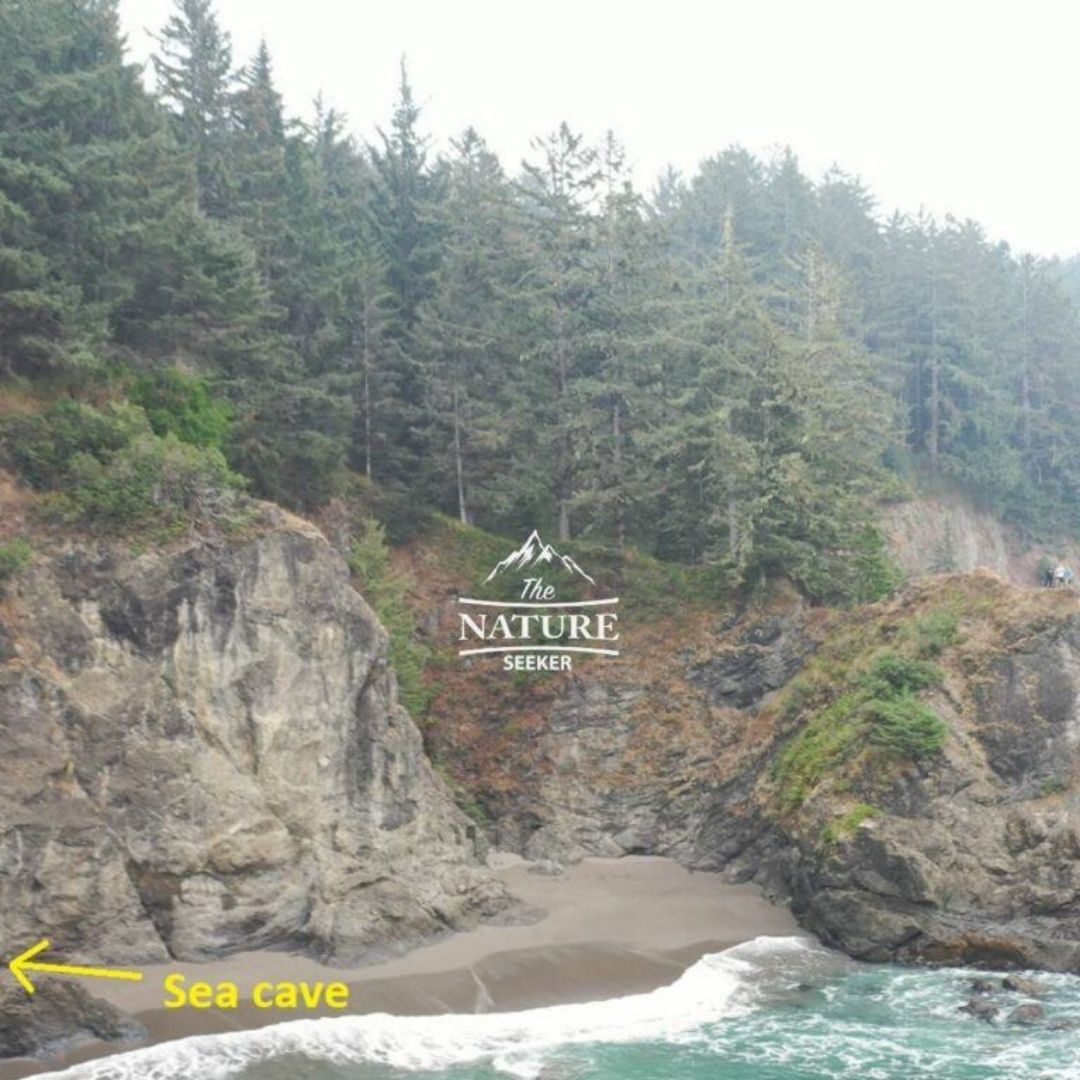 But either way, with this location, you’re looking at 2-4 sea caves, spread across 4 different beaches, which make up the Secret Beach location.

Some of them can ONLY be explored during the low tide and frankly, you’re much better off going during low tide to ANY of these locations in general, for your own safety and also the ability to explore the caves in general.

In any case, Secret Beach is stunning and second to Natural Bridges on my list of places to see on the Oregon Coast.

I have visited it twice and saw more than a few sea caves, but there was one I wanted to see that I probably would have to take a rope down to.

You can see that one on the picture to the right.

It’s located on the northern most beach of Secret Beach. 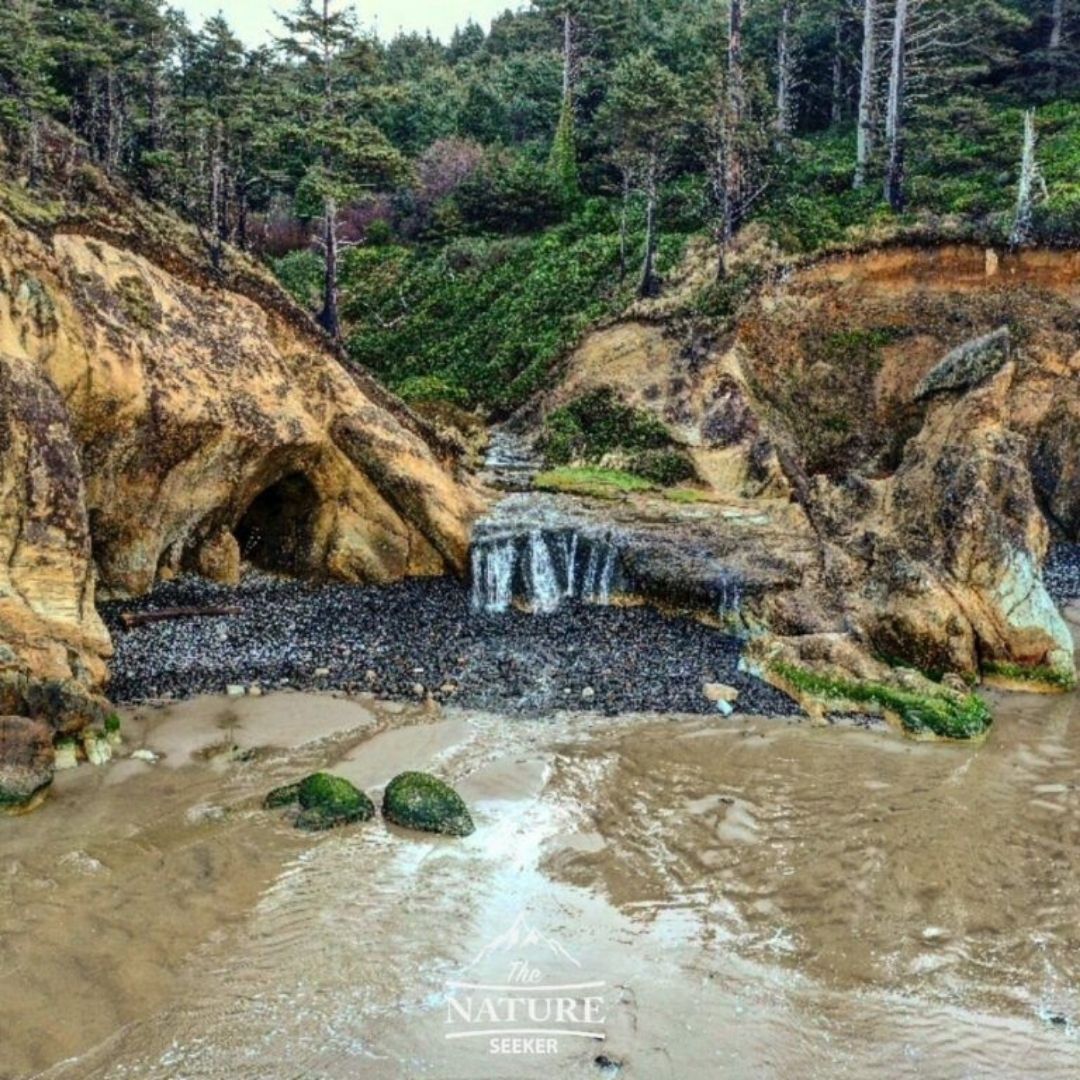 Hug Point can get packed on weekends, but if you can get there early (or on a weekday and during low tide), you won’t just see sea caves, but you’ll also see a beautiful waterfall near them (known as Hug Point Waterfall).

It is one of the few beaches with waterfalls you’ll find, but it is beautiful.

Some of the sea caves at Hug Point Beach don’t go too far in, but they are deep enough to get into and take some great photos from, and hiking up the waterfall is also a very cool experience.

The picture you see to the right is from the first visit I took to Hug Point in 2018 and this was during high tide. I barely made it to the waterfall, so trust me when I say, going here during low tide is paramount if you want to get close to the waterfall and see the sea caves by it.

The good news is that Hug Point is one of the least dangerous places in my experience to explore as it just requires a simple stroll on the beach to reach these sea caves. 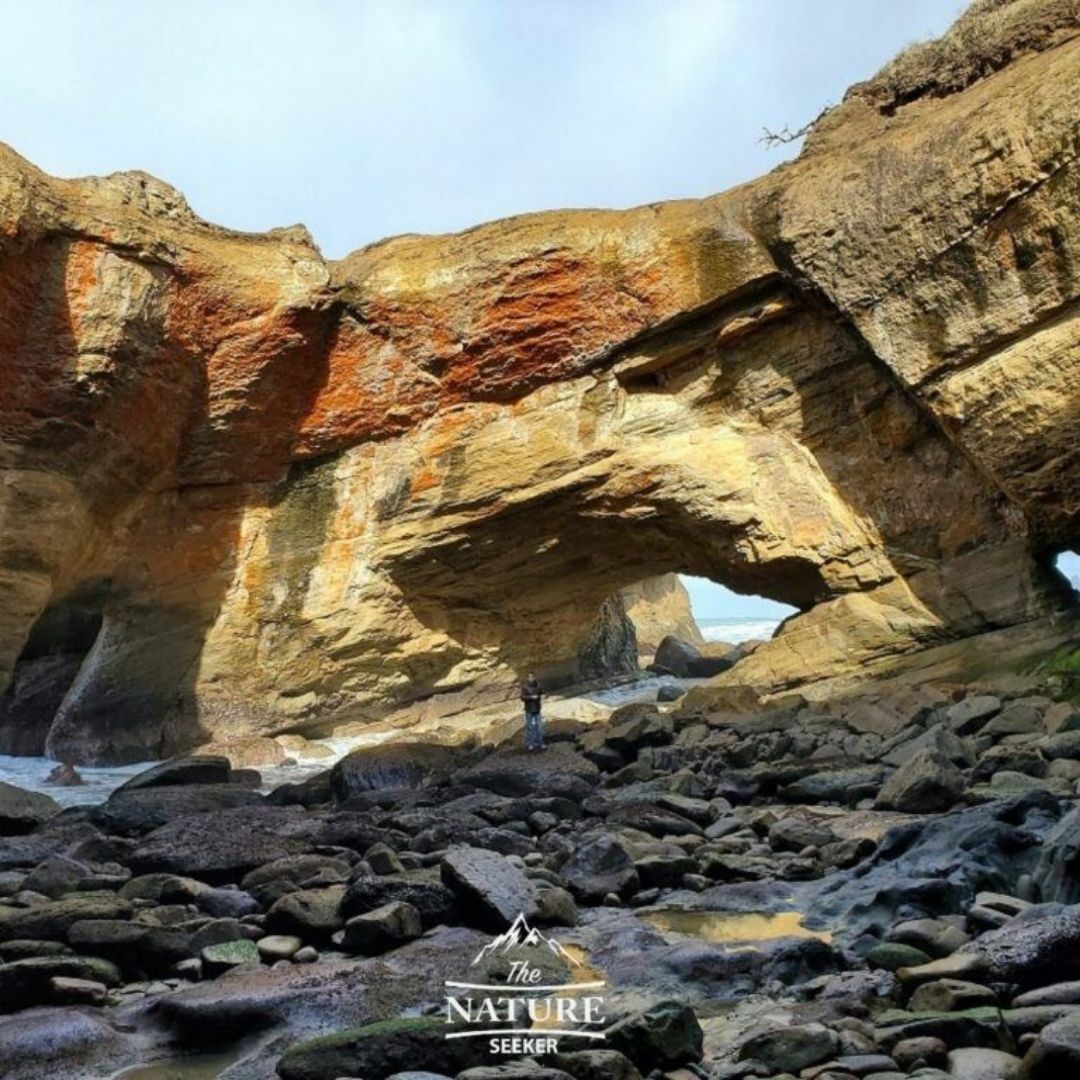 Devils Punchbowl is a very simple but beautiful spot on the northern Oregon Coast.

It is literally a giant hole with 2 caves in it and 2 more right outside of it.

To hike into this region requires you do so at low tide.

Most of the hike to Devils Punchbowl is explained in the link above.

And the good news is that it is fairly easy to get there.

The only issue comes about when you reach the actual area of Devils Punchbowl and have to hike into it if you want to see more and that’s when it can get pretty slippery.

If you do decide to go there, I recommend you wear either water shoes, or simple but very good hiking shoes like the Ozark trail shoes.

There’s a lot of wet rocks, algae and just overall a slippery environment to go through, but the hike into Devils Punchbowl is definitely very memorable!

One is closer to southern Oregon while the other is more located near Florence, in Northern Oregon and that is the more famous one I’m including on this list.

Now this particular attraction isn’t really a hike or anything challenging.

You just drive on the 101, see the sign to check out the sea lion caves, pay the fee, take an elevator down and from a distance look at the sea lions in the giant sea cave.

This might be a good attraction to check out if you’re traveling with family or aren’t someone who wants to get into serious hiking stuff like with the other options above.

I personally have not gone here, because I just like going to the more remote areas and finding this without having to pay for it.

But if you enjoy tourist attractions, this is one of the most popular ones on the Oregon Coast for sure.

Why are the sea lion caves closed?

The sea lion caves are actually open now. They were closed before due to multiple reasons but are now open once more.

What city is the sea lion caves in Oregon?

When should I go to the sea lion caves?

Earlier in the year is better because of less crowds or lines and you can still see the sea lions.

Hiking gear for exploring sea caves on the Oregon Coast:

More sea caves to check out on the Oregon Coast: 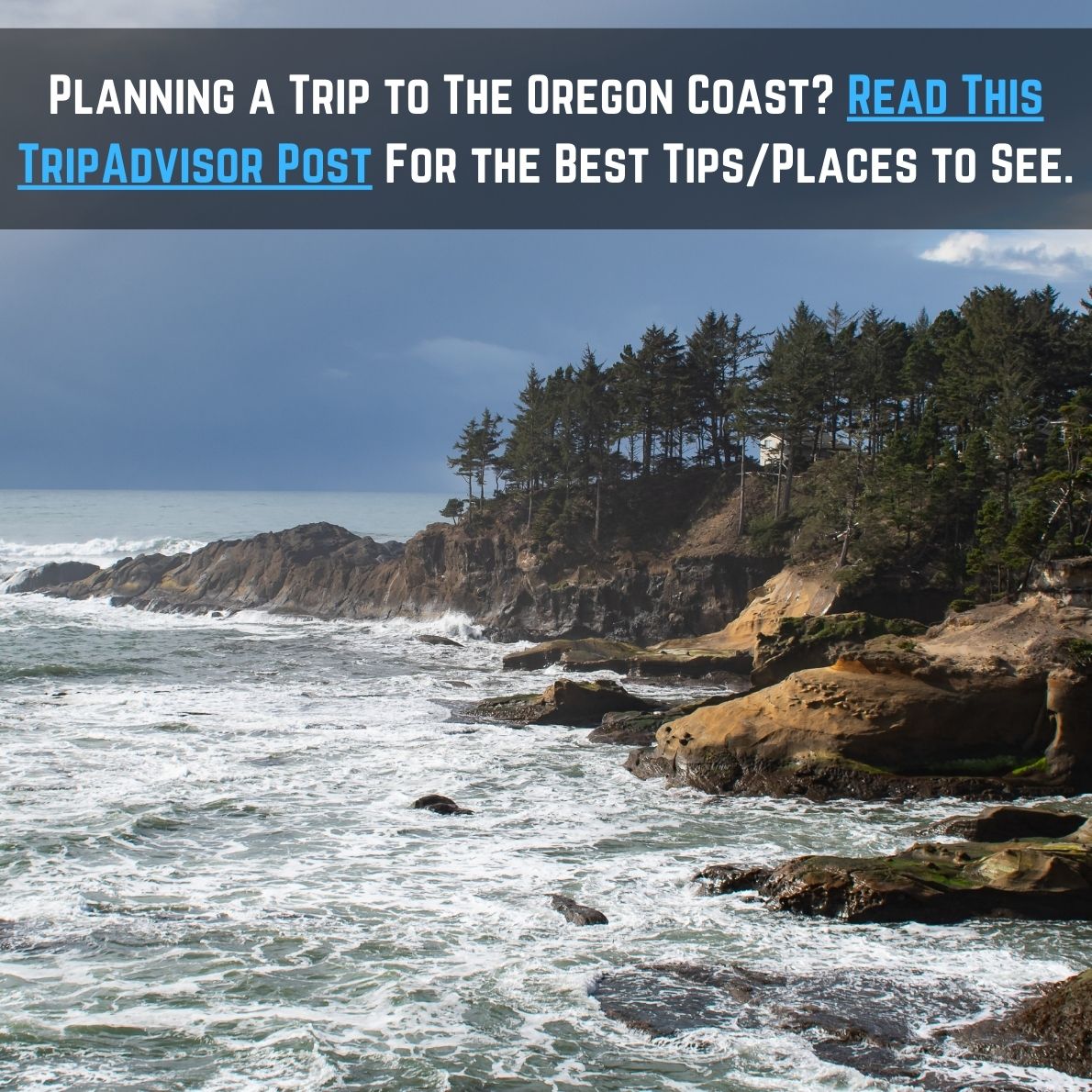 As I said before, there’s tons of sea caves and day hikes all along the Oregon Coast, but many of them are carefully hidden and likely places only locals know about. You may want to see a Tripadvisor post here on the Oregon coast to get some suggestions.

It also doesn’t make sense to explore all of the coast in this state to find them, so I decided to choose ones where you’ll get plenty of opportunities to explore sea caves that are packed together in one location.

I absolutely love the Oregon Coast and have seen it during 2 road trips:

More places in the US to find sea caves at:

1) The California Coast has many sea cave areas to explore (like Big Sur).

2) The Washington Coast also has a lot of spots like Cape Flattery which have them.

3) The Maine Coast has them too (Acadia National Park).

Thanks for reading and if you have any personal sea cave recommendations you’re not shy about sharing on the Oregon Coast, you are welcome to do it below!