Since early 2020, the main trail to Observation Point, in Zion National Park has been closed. But did you know that there exists another, alternative and legal trail you can take to reach the same overlook? 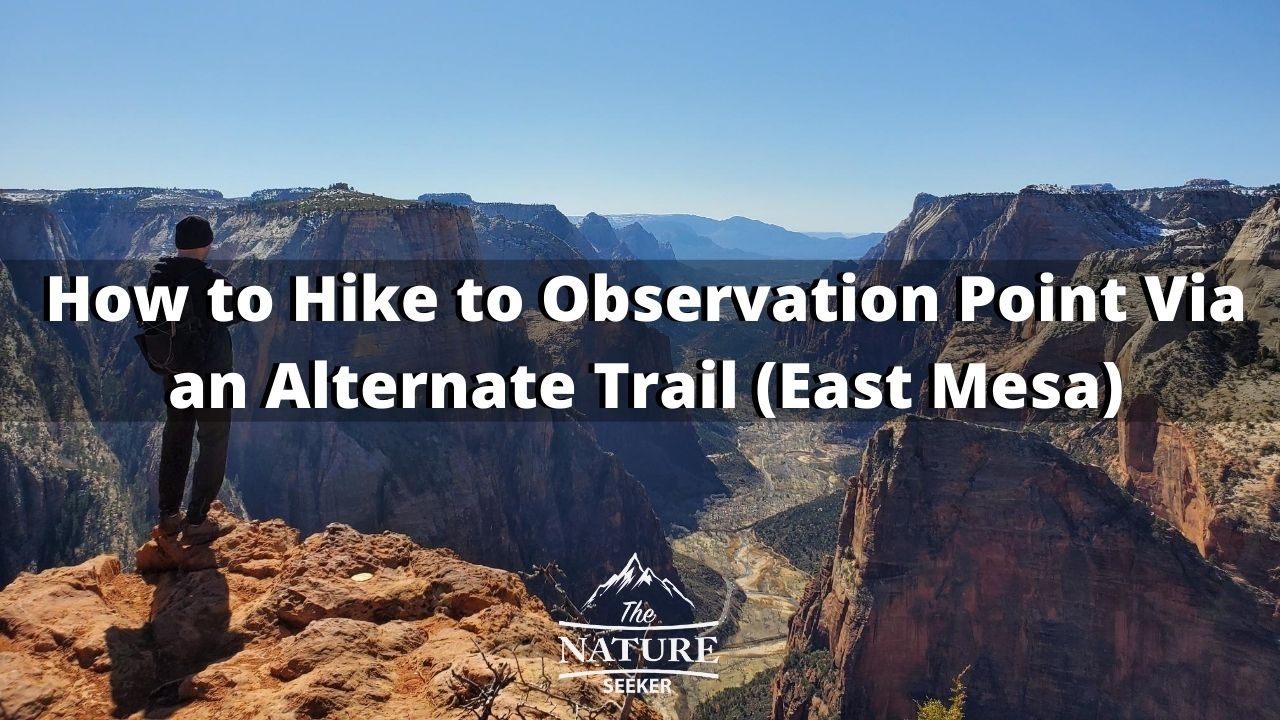 And it will take you right to Observation Point too.

The picture you see to the right is me standing at the edge of Observation Point after finding and following this trail, when the main one was closed.

In order to get to the East Mesa trail head though, you’ll have to follow a few instructions that I’ll talk about in this post.

It will involve having to leave the park out the east end and enter a road that leads back into the park from another entrance up north. It seems counterintuitive, but it’s a legitimate trail.

I’ll show you a map of it and how to get there shortly.

It’s not difficult to reach or hike to Observation Point from it, and because we don’t know how long the official trail (East Rim) will be closed, it’s better to use this alternative trail in the meantime.

Why is the main trail to Observation Point (Called East Rim) closed?

The National Park Service site for Zion National Park has reported that a rock fall on the main Observation Point trail is responsible for the closure and until it’s cleaned up, the main one won’t reopen.

Considering how slow and in my opinion unreliable NPS is at getting stuff done quickly (this closure has been going on for months now with no definite date of reopening). It’s about an 8 mile hike from this main trail (there and back).

I discovered this alternative trail while visiting Las Vegas in 2020 and planning another visit to Zion National Park. Before doing so, I checked the NPS site and saw this closure was publicized there.

This first made me consider omitting visiting this spot and possibly revisiting Angel’s Landing, or perhaps giving The Subway Trail a shot, but thankfully, a Zion local told me about the alternative trail I could take to still see this beautiful spot, aka the alternative trail.

Info about the East Mesa Trail to Observation Point:

It’s not a commonly known trail for basic tourists to Zion, but it’s been around for as long as I can remember and it begins outside and east of the park.

It’s still open and keep in mind that the closure in Zion National Park isn’t to the actual overlook, but the main trail which leads to it. And the good news is that besides being able to reach Observation Point legally, it’s a great simple hike that gives you time to do more one day hikes at Zion National Park, which we did afterwards.

How to hike to Observation Point through the alternative East Mesa trail:

The first thing you’ll want to do is take a screenshot or download this map (or ask for it in the visitor center of Zion). In my case, I took this picture of the map, by the trailhead to Observation Point: 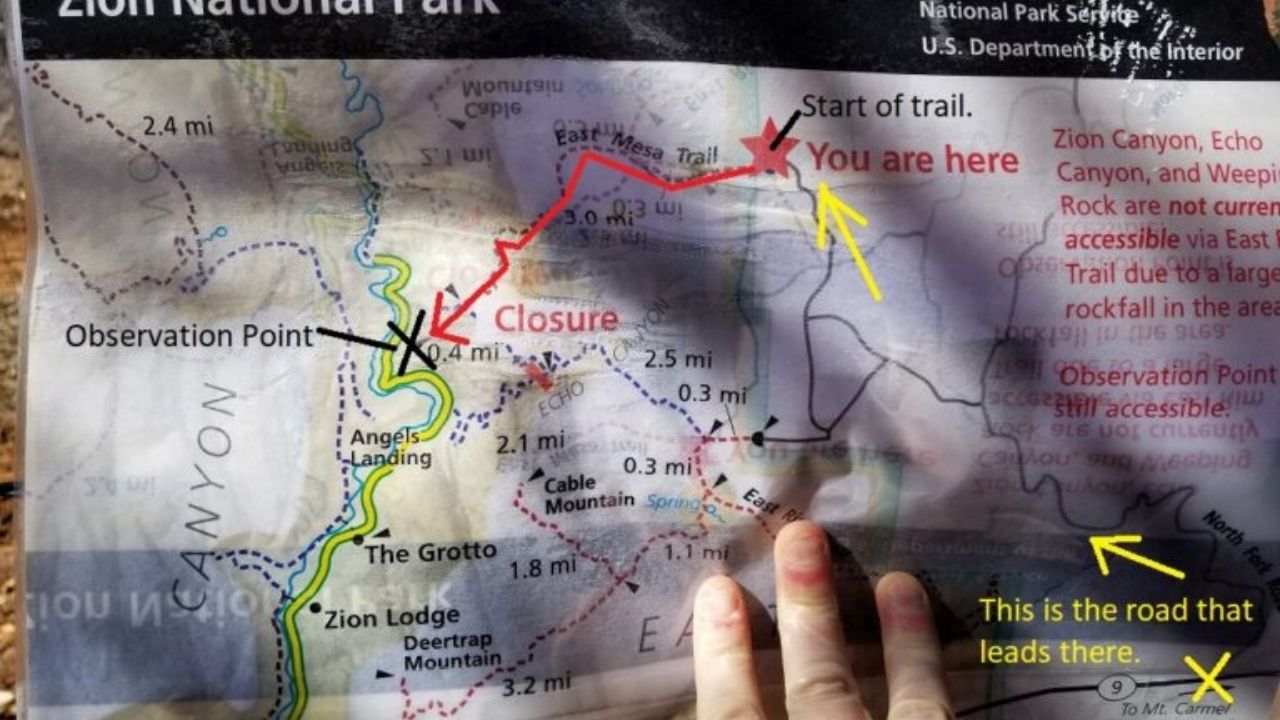 As you can see where it says trail closure is part of the East Rim trail and that is the official Observation Point trail that’s closed off.

The first thing you need to understand is that Zion has 2 main entrance points:

Regardless of which entrance point you’re coming into Zion National Park from, in order to access the East Mesa Trail which will take you to Observation Point, you’ll want to:

Be outside of Zion National Park to even get to the trail head which is East Mesa, so don’t worry about exiting the park, it’s part of the process.

I’ll be detailing each step of the drive to the East Mesa trail, followed by instructions on how to navigate through the trail itself (which is easy) shortly, but it’s really the drive that can be a little bit confusing for first timers, like it was for myself and the buddy I went with.

It’s easy to think the road you use to get to East Mesa Trail doesn’t go anywhere and want to turn back.

Here is a Google map listing for the East Mesa trail head (just in case): 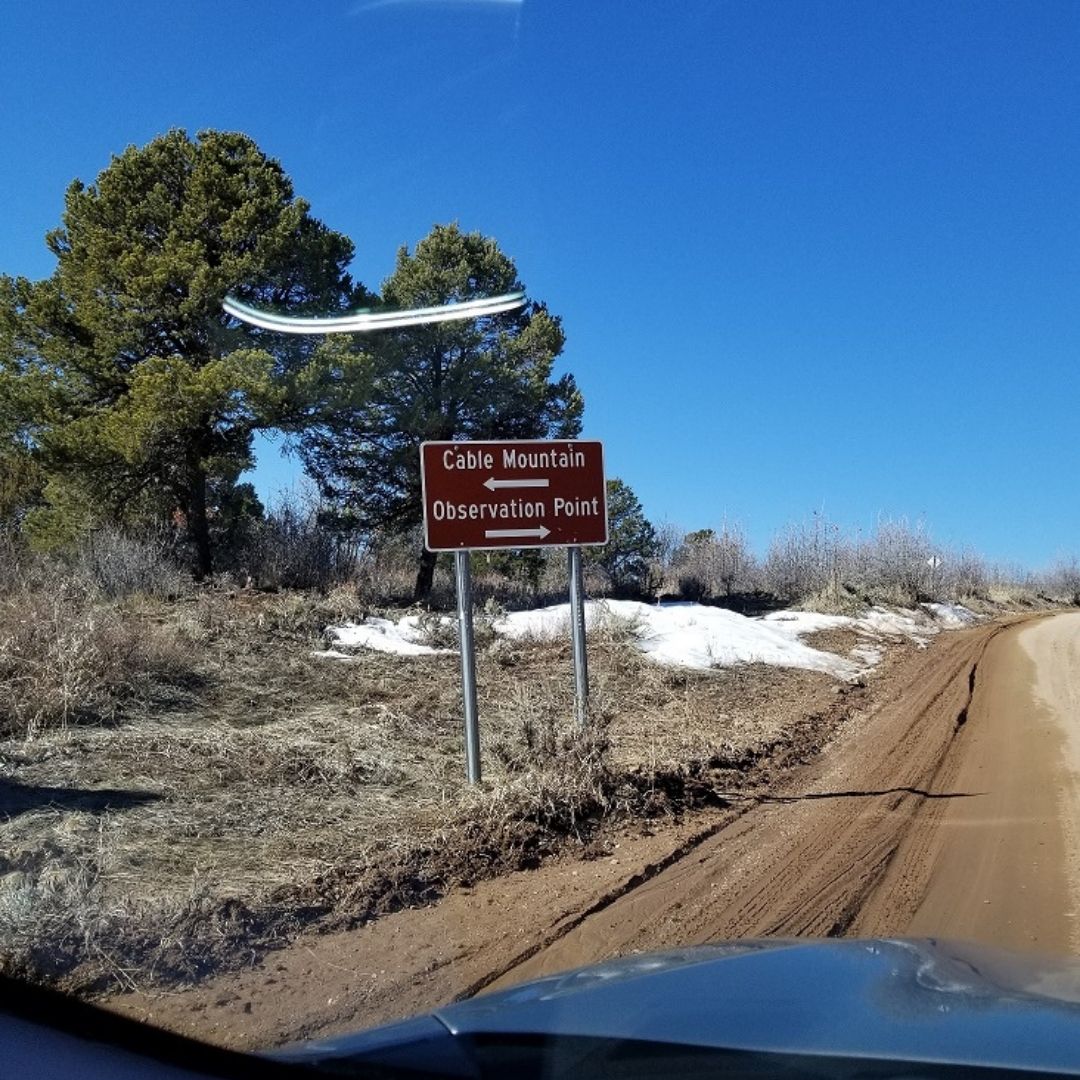 If this map listing doesn’t take you through the same steps I just showed you above, then follow the steps instead.

It’s really not a difficult road or trail to reach, but it’s the off road aspect of entering this area that can suck and there are many turns along the way that seem enticing.

Just follow the map and look for Observation Point signs (there are multiple ones, but they can be far apart sometimes).

Here is an example:

During warm and hot seasons, getting to the East Mesa trail head should be easy, but we did it during the winter, when there was a lot of snow, icy and wet areas, making the mud very deep, slippery and difficult to bypass on the car we were in.

It’s even a miracle we were able to drive so far into this road to begin with.

I think even a 4 wheel drive car would have problems.

About a mile before the trail head, we decided to stop the car for fears of it getting stuck, parked it in the nearest area possible without obstructing traffic and walked on foot to the trail head.

It took us about 15 minutes to reach it: 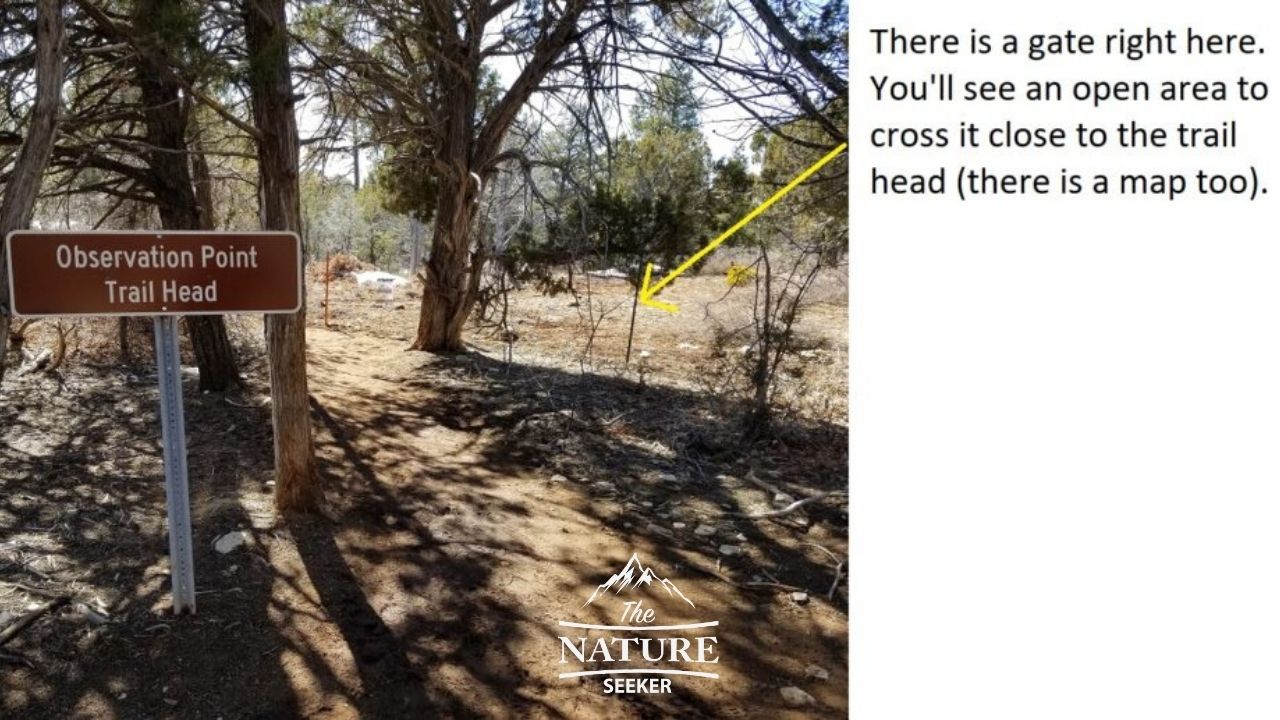 Just a heads up:

Don’t make the mistake of following the gate, because the entrance past is actually easy to miss. Remember, it’s right next to the trail head and right near the map on the gate itself.

What to expect hiking the East Mesa Trail to Observation Point: 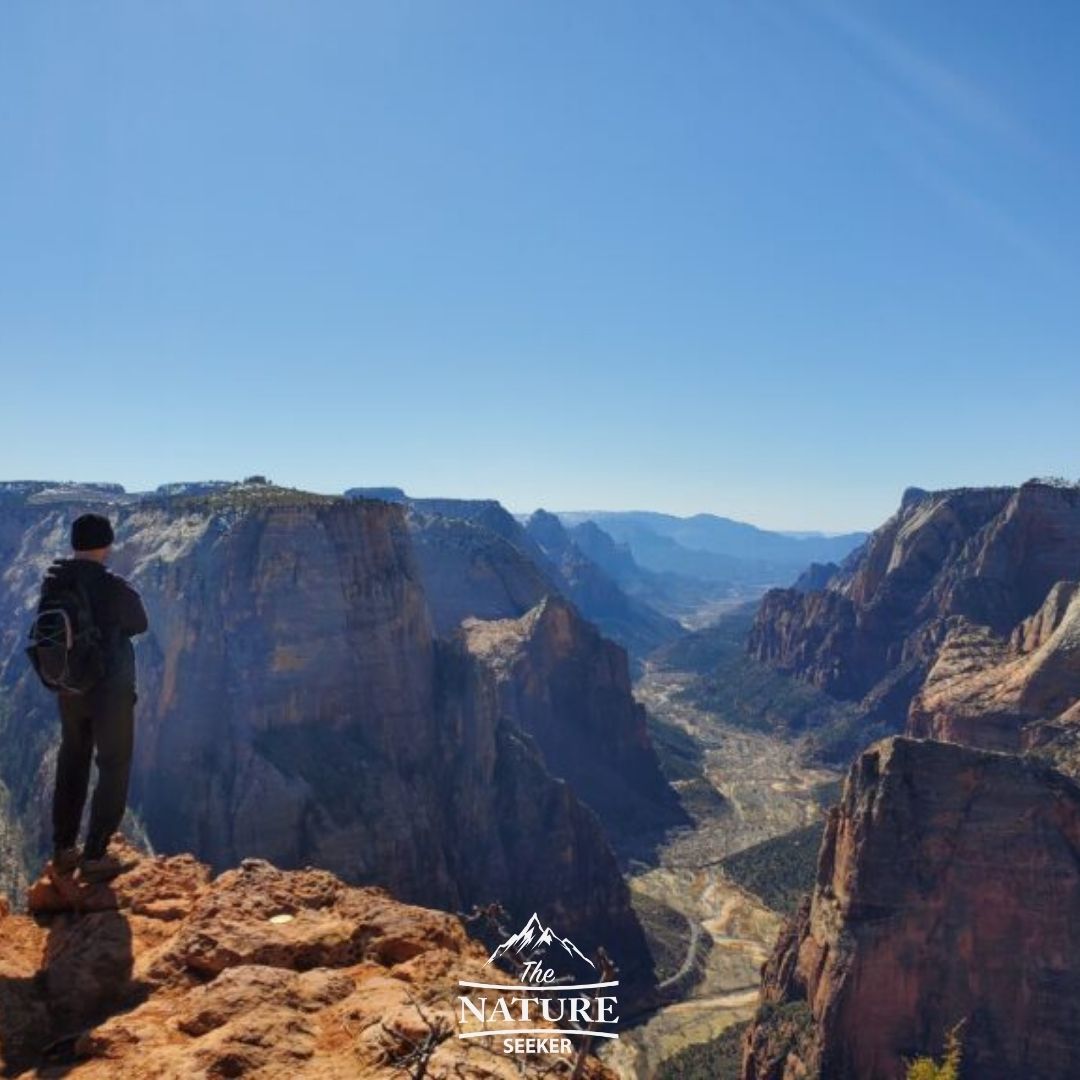 Once you pass the gate, it’s a very easy trail to navigate, but it will take you a few hours to reach the Observation Point overlook (if you’re just walking that is).

For us, it was simple to follow the trail as we could easily see plenty of footprints all leading there (and back).

This trail is apparently not well known, since we only saw 2 other people while we were there, but rest assured, it WILL take you to Observation Point, while the main trail is being fixed up.

And of course, once you to get to Observation Point, enjoy the views!

Since much of my hike there involved going through muddy and slippery areas, there are 2 sneaker recommendations I have:

Either way, make sure to wear proper shoes here, as it will make a huge difference in your hiking experience.

6 other things to do in Zion National Park after you hike to Observation Point:

1) If you have more time or are planning to spend a few days in Zion, you can read up on my Zion National Park one day hike ideas on things you can do each day while at this park.

2) For us, we hiked a chunk of the Narrows trail after doing Observation Point.

3) I wouldn’t bother with Angels Landing because you’re basically going to be doing a similar hike and I think the hike to Observation Point is safer than Angels Landing anyway.

4) If you plan to exit Zion National Park, you may want to consider checking out the other parks in Utah, also known as the Mighty 5 National Parks, the closest of which is Bryce Canyon National Park, which is also very beautiful. I also highly recommend Coyote Gulch as well!

5) And for the great area in the state, here is a list of the best hiking trails in Utah (the list is going to grow).

6) Another option is to try some awesome hiking trails in St. George which is close to Zion National Park.