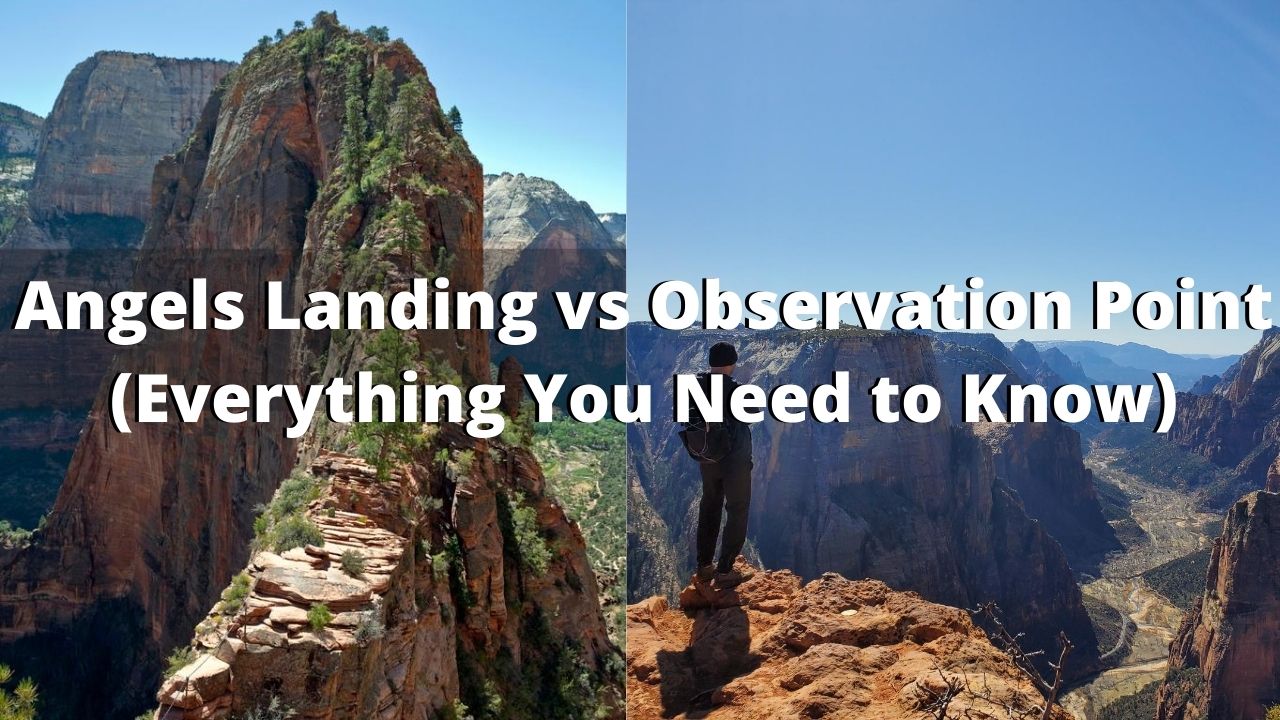 There are 2 very popular trails in Zion National Park that give you an amazing view of it. One is Angel’s Landing and the other is Observation Point.

Both give you a similar view of the park, and this article is going to help you decide which one is better and safer for you to hike through. 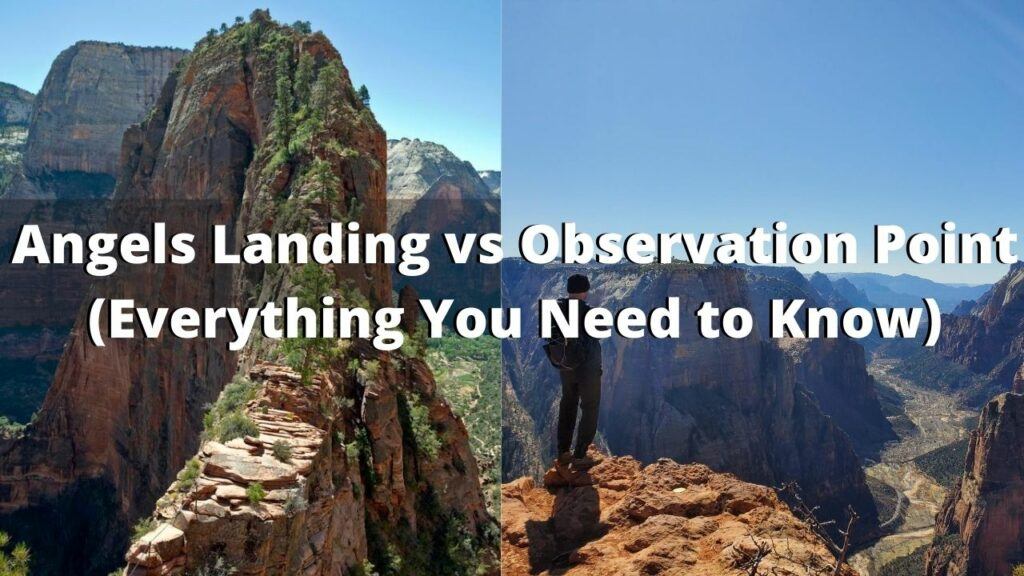 After exploring both trails and seeing how often people ask common questions about them, such as which one is safer, better or worth hiking, I decided to write this article to help you with that.

Now before I begin, let me say that these 2 trails obviously aren’t the only jewels within Zion National Park worth checking out and another place I was able to check out twice was The Narrows, and I highly recommend doing that hike too (you can possibly do both the Narrows and Observation Point or Angel’s Landing in a day).

Angels Landing vs Observation Point. 11 important facts about each trail:

1) Angel’s Landing is a short, 5 kilometer hike (one way). Observation Point however can be 3-4 miles (one way).

2) Angel’s Landing hike is far more strenuous despite being shorter. Observation Point is steep at times, but not overly strenuous.

3) Both trails are very scenic and the view you get from completing each one is breathtaking.

4) Observation Point is actually at a higher altitude than Angel’s Landing, so you will see more of Zion National Park from it.

5) You can think of Observation Point as a “step up” from Angel’s Landing in terms of height and you see the same views.

6) Angel’s Landing has unfortunately had several falls & deaths on it. Observation Point has had 2 official ones (less).

7) Angel’s Landing is arguably the more popular climb/trail than Observation Point due to it’s challenging hike.

8) You can actually see Angel’s Landing from the Observation Point overlook.

9) I would not recommend you go on any of these trails when it’s icy or snowy. If you do decide to do that, then know that Angels Landing would be more dangerous there. Wear good shoes either way (Ozark trail shoes or Salmon Speedcross sneakers would be my advice).

Based on these facts, you should decide which trail is better suited for you, but what I want to do right now is answer some common questions people have when comparing the two and give you my answers to better help you decide. So let’s get to that: 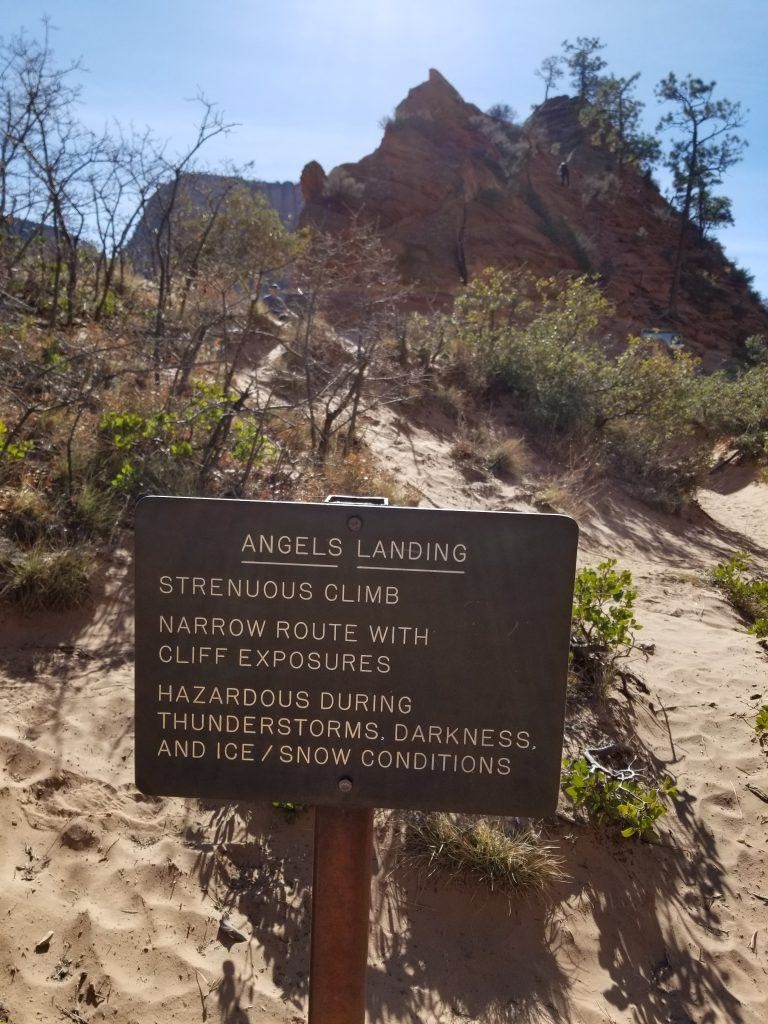 I don’t think you’ll find too many people who hiked both trails would disagree here, certainly not me.

In 2019 when I did Angels Landing, I was able to complete 95% of the trail (it’s fairly safe) until the last half mile hit (that’s when it gets really dangerous) and I had to stop because the narrow path that leads to the most beautiful part of the trail was too much for me.

I even admitted to getting dizzy as I was trying to make my way up there and this is what caused me to stop, and turn back. Even though there were chains on much of the trail there, even having that didn’t help the dizziness go away and I felt it was too dangerous to continue.

Perhaps one day I will return and cross off Angel’s Landing on my list as being fully completed.

But either way, my experience with Observation Point was totally different and while I could not do the main East Rim trail, due to it being closed, I instead found out about an alternative trail to Observation Point which wasn’t as scenic to walk through (3 miles), until I hit the last half mile, then it became ridiculously beautiful and was totally worth doing.

But yeah, if you’re looking to get a great view of the park and safety if your top priority, Observation Point is a safer hike.

2) Afraid of heights? Stick to Observation Point over Angels Landing. 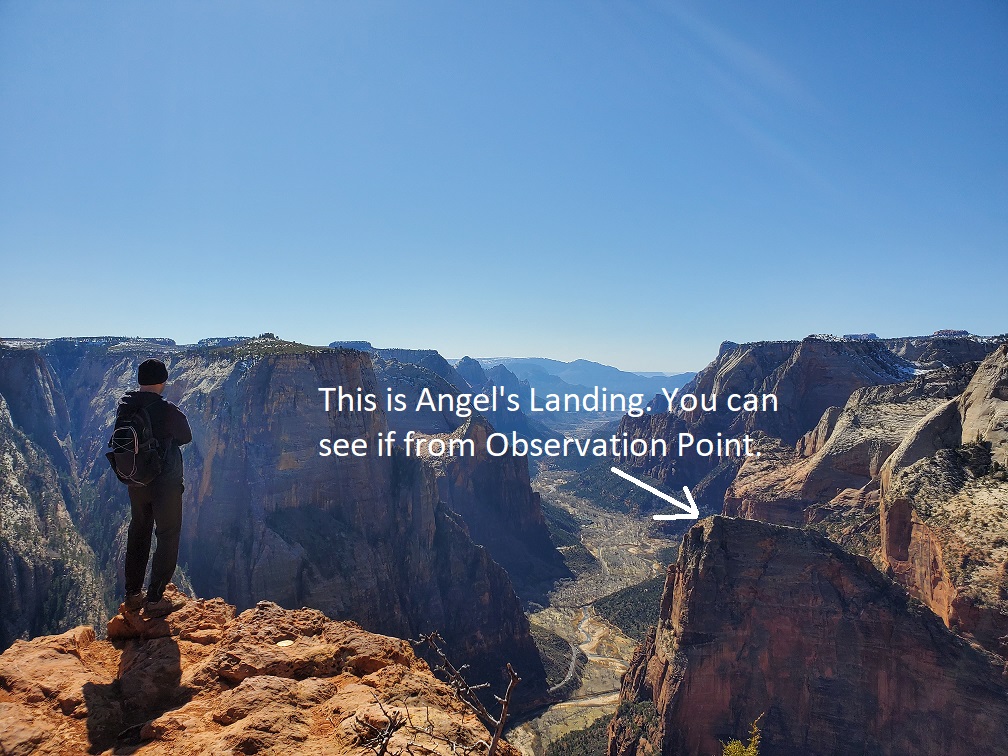 This is really tied to safety but again, the last half mile of Angel’s Landing is where things get VERY dangerous and if you have any fear of heights, I would strongly advise not going on this trail because for people like me who aren’t fans of heights, you may get dizzy (which is what happened to me) and that’s obviously very dangerous.

Now despite being higher in altitude, Observation Point is so much easier to reach and so much safer and even though I dislike heights a lot, I never found myself feeling that same dizziness or fear I had when I hiked Angel’s Landing and not once did I want to stop out of fear, but instead I had to stop numerous times to enjoy the view and take pictures.

In fact, at no point in time did I feel scared of the heights at Observation Point because it was in such an area that I felt fairly safe and confident to be at.

3) Which hike is more challenging? Both trails have their trade offs.

On one hand, Observation Point takes longer to reach (3-4 miles one way), but the hike itself is safer and less strenuous, where as the Angel’s Landing hike is about 5 kilometers one way, which is obviously shorter, but there’s parts of the hike there, especially towards the end which are VERY strenuous.

So if you like shorter hikes, on paper, Angel’s Landing wins, but because it’s more strenuous, you may get more tired.

4) Which hike is more scenic? Again, it’s a trade off.

Angel’s Landing for me was very scenic, despite the real jewel being the last half mile I couldn’t hike. But I really enjoyed hiking through the canyons and making my way up the trail.

Here’s an example of the trail views you’ll see there:

The left side is Angel’s Landing and at first glance, it looks far more scenic, but remember, for Observation Point, because I had to take the alternative path, it wasn’t nearly as scenic and I have looked at pictures of the main trail which is currently closed and it looks to be as beautiful if not more than the Angel’s Landing one.

I can tell you however that both trails are beautiful and the fact that you’re hiking through Zion National Park is its own beautiful experience.

5) Which hike is better for beginners? Depends on how you deal with heights.

If you don’t mind them, Angel’s Landing might be a better hike. If you do fear heights, Observation Point all the way.

6) Which hike is better for a day trip? It depends on your physical level.

But if you’re in good physical condition and can finish trails pretty easily, and do fear heights like I do, Observation Point is what I would recommend.

7) What if you have health conditions of injuries? Do Observation Point or none of these trails.

I don’t think it’s worth risking your health to hike either of these trails if you have serious health conditions. There are plenty of other trails in Zion National Park worth exploring that don’t involve tough and long hikes and you can get a list of them at the welcome center to Zion when you enter the Park.

And also, if you didn’t already know, the scenic drives in Zion are spectacular and totally worth investing your time in doing. There’s plenty of pull out parking spaces you can stop at to enjoy many sights in the park and there’s no reason to only limit yourself to these 2 hikes.

Overall, if you can, do both Angels Landing and Observation Point if possible.

I can tell you that doing both hikes is totally worth it and if not in a single day, then over the course of 2 or more. Each trail has it’s own beauty to offer and even though at the end of it, you basically see the same views, the effort you make to get to those viewing areas is totally different.

I do hope this article has better helped you decided which of these 2 popular trails in Zion National Park is worth doing. If you have any questions on them or want to share which one you chose to do (or have done), I’d love to know which of them you thought was better!

2 thoughts on “Angels Landing Vs Observation Point. Which Trail is Better?”