The Subway Cave is considered one of Sedona’s most beautiful “secret” spots, and for some reason I’ve seen a number of people say that it’s tough to find, let alone hike to. The truth is, it’s not.

In my case, I found it on my first try effortlessly and because of that decided to write this simple guide for you just in case the other sources out there aren’t good. It’s really not that difficult and if you follow the instructions I’m going to give you, you’ll get there easily. Let me give you some basics first:

Quick info on the Subway Cave Sedona hike in Arizona: 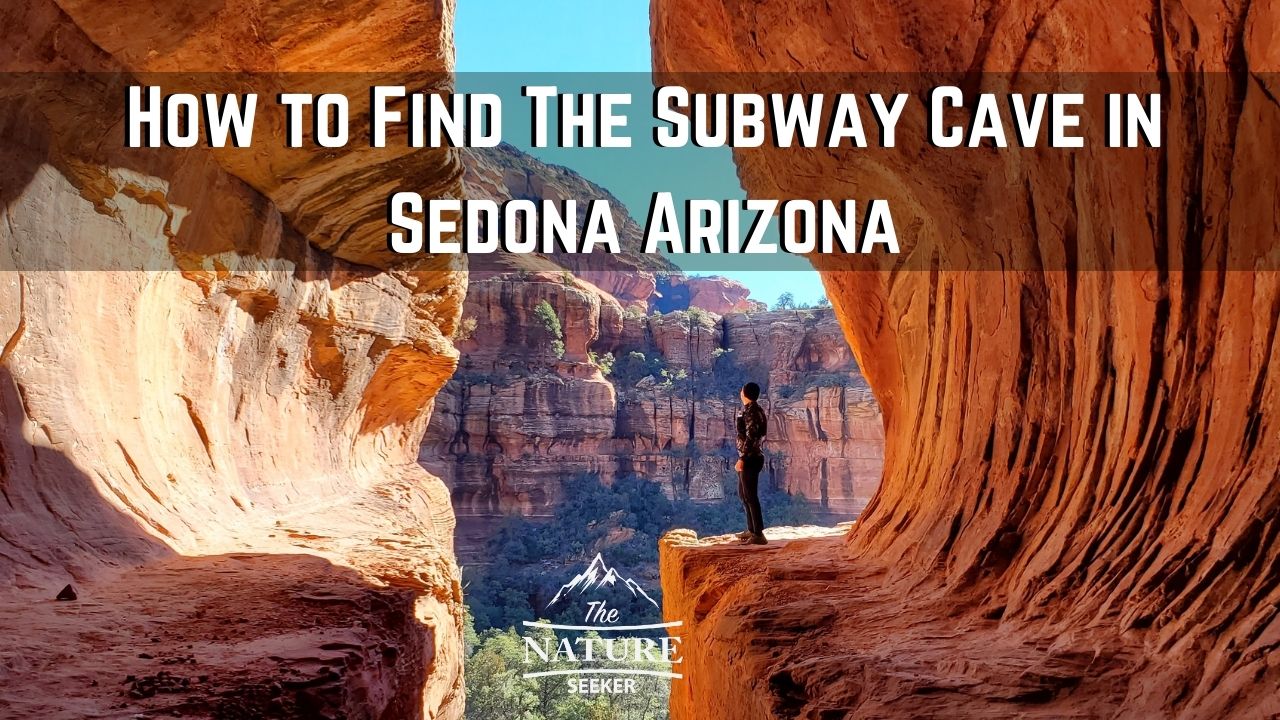 This is the quickest overview of the spot, but from this point forward, we’re going to get into the details.

Here’s how to find the Subway Cave in Sedona (step by step directions):

The following steps detail how to reach the parking lot, then where to start on the trailhead, and where to go off the main trail to find the Subway Cave, followed by what else you can see in the area afterwards.

1) Input “Boyton Canyon Trail” into your GPS (this is where the hike to the Subway Cave is):

This is important. Boyton Canyon is where the Subway Cave is located, but it’s large and you have to start at the right trailhead.

If you don’t input the right starting point, your GPS might lead you to the wrong area/trailhead. The Boyton Canyon Trail is the right spot to start this hike at. I’ve added a GPS link there just in case.

This place is a fairly large parking lot and you will have to pay a fee to enter ($5 Red Rock pass). I would recommend you come here early, if not on off season.

In my case, I came here right after finishing the Devils Bridge hike and I was fortunate to literally find 1 spot left open (and this was around 11 a.m). I would also like to say that this hike (Subway Cave), Devils Bridge and Cathedral Rock are likely the most crowded trails I’ve seen in Sedona, so keep this in mind! 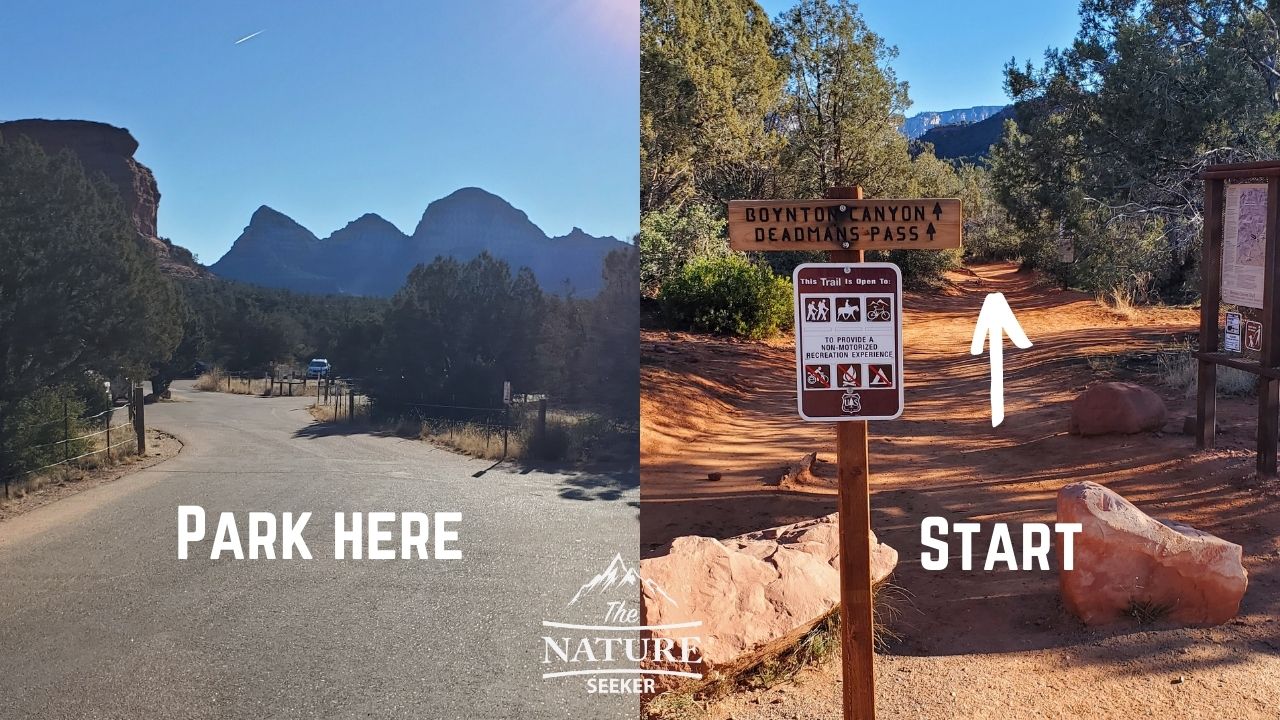 2) Find and start at the Boyton Canyon Trail (look for the sign):

The trailhead is very close to the entrance of the parking lot (across the kiosk to buy day passes). You’ll notice it says Boyton Canyon and Deadman Pass. This is because there’s 2 trails in the area and you only want the Boyton Canyon one.

I’d also recommend taking a picture of the trailhead map and/or downloading the map in Alltrails (the Subway Cave one is there too).

If you go left (on the side where the Red Rock pass kiosk is), it’ll take you to connecting trail called Aerie (you don’t want that). 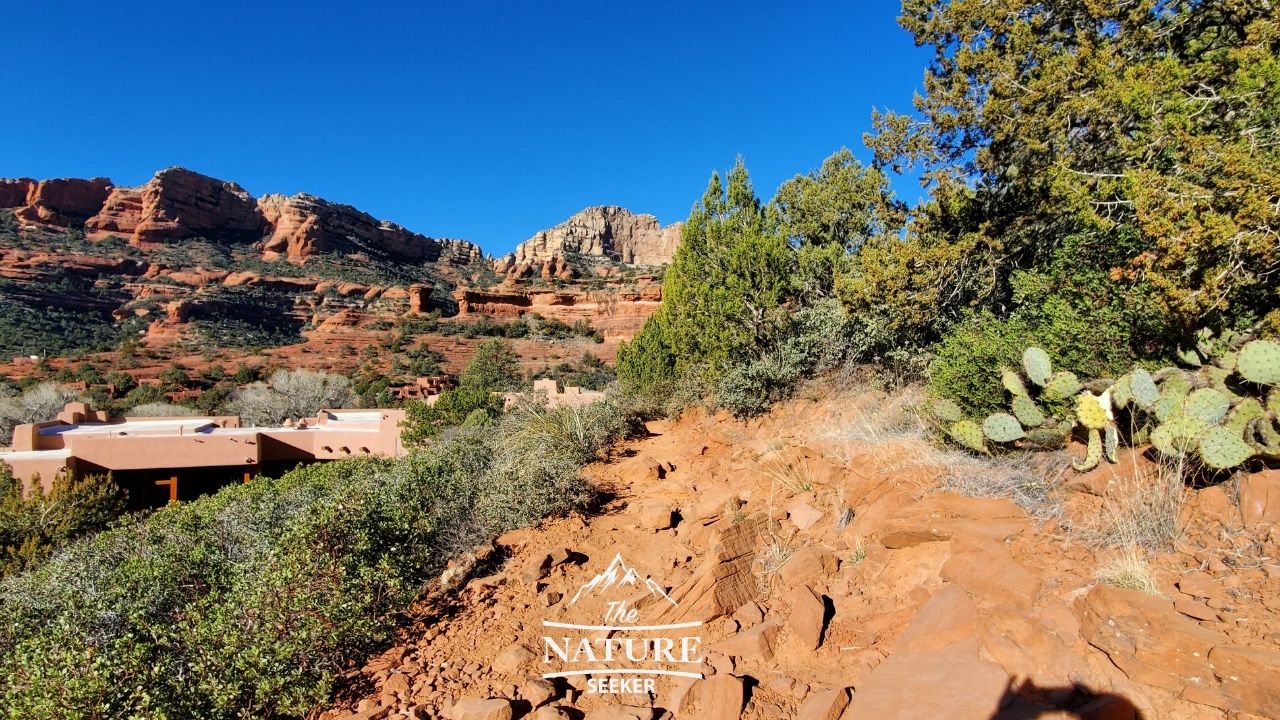 You’re going to see several sign posts for Boyton Canyon during your 3 mile hike to the Subway Cave.

1) The first one is about 200 feet from the trailhead where you start. It splits with Boyton Canyon going left (where you will want to go) and Deadman’s Pass which goes right (totally different trail).

2) The second one is about another 200 feet from the first and it splits left and right. The left continues into Boyton Canyon Trail (again, this is where you will want to go) and the right goes to Boyton Vortex Trail (it sounds the same but it’s not where you want to go unless you want to do a side trip).

You’re going to be on the Boyton Canyon Trail for about 2 miles. You’ll know you’re going in the right direction if: 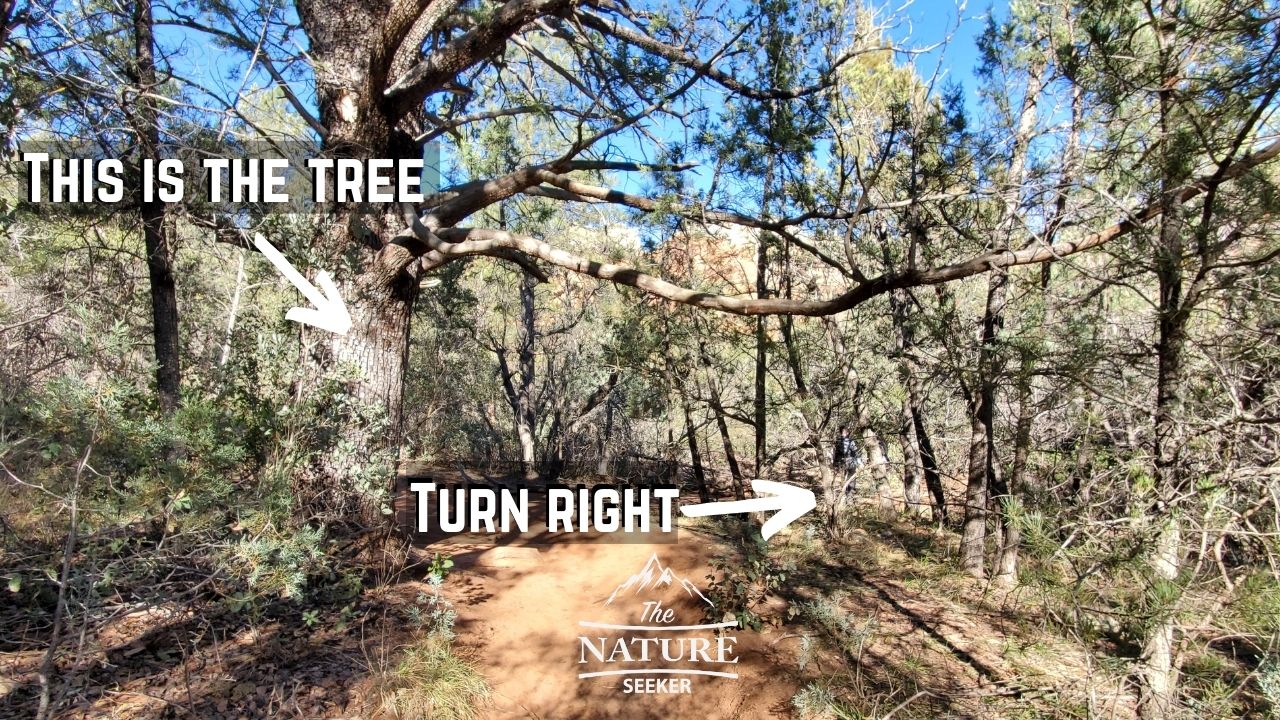 4) About 2 miles in, look for the “crocodile tree” on Boyton Canyon Trail (turn right here to reach the Subway Cave):

This part is a key turn in the trail to the Subway Cave!

As you continue to hike on Boyton Canyon trail, you’ll eventually come across a pretty big tree (that I’ve included an image of for reference) whose bark will look like the scales of a crocodile (hence the name).

It will be the only tree of it’s kind in the area and it’ll also be a fairly open section of the trail.

If you stay to the left, you’ll continue to go into Boyton Canyon (don’t do that, unless you want to see other sights other than the cave).

Note: As you get closer and closer to the crocodile tree, you’ll come across others that look like it, but from what I’ve seen, they are either small or in large numbers. The right one you’re looking for is: 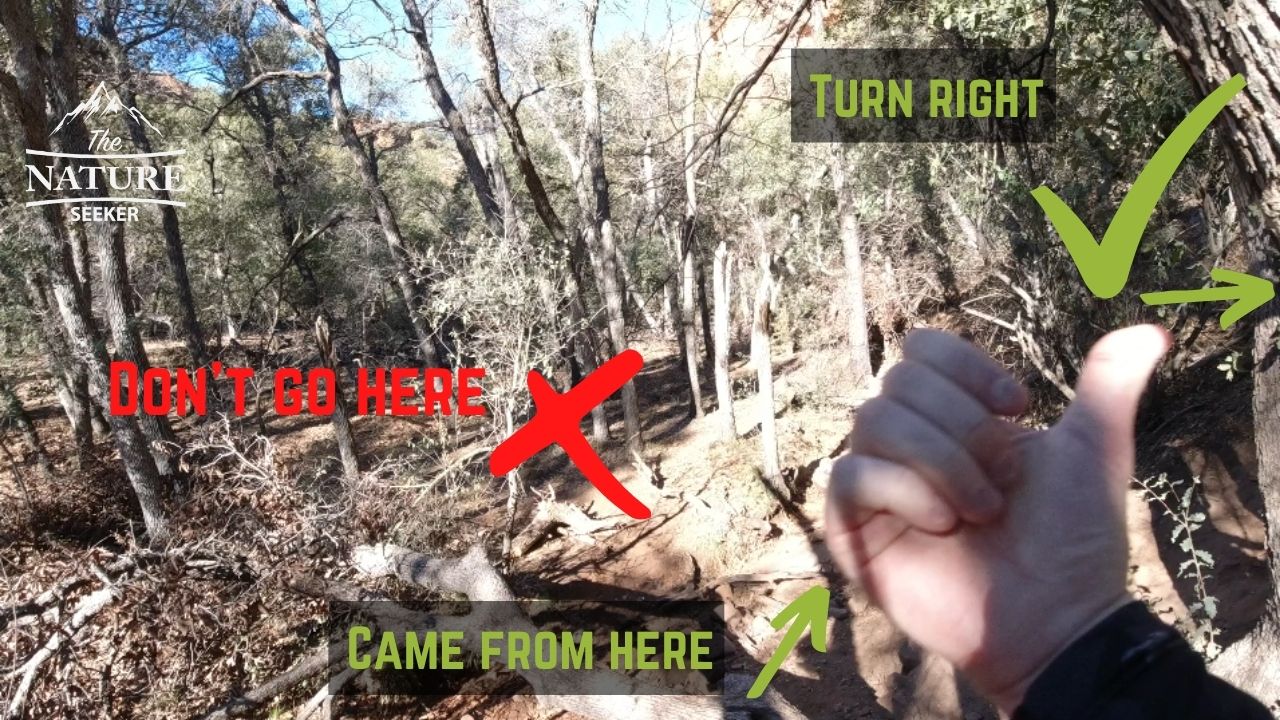 5) After turning right at the crocodile tree, it’s less than a mile to the Subway Cave:

This trail after you turn right from the Crocodile tree isn’t as clear cut as the one you’ve been on so far, but it’s still clear enough to follow.

You’ll basically be following it in a zigzag motion and it’ll be going north for the most part.

There will be one part of that particular trail where you may get confused and I’ve included a picture to show you that exact spot and how not to get lost.

Basically the trail will take you close to a creek and do an almost 180 degree turn (make a right turn basically). Make sure to make that right turn and continue because there is another trail across the creek that may look like it’s the right way to go (It’s not). 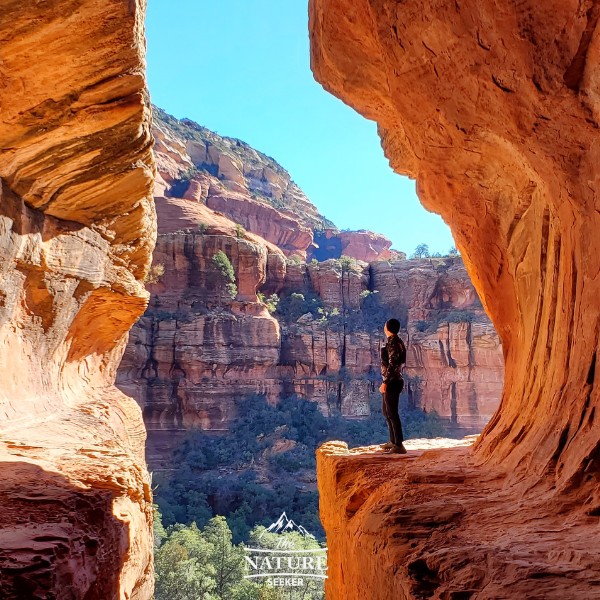 6) Keep following the trail until you reach the Subway Cave:

Again, it’s not that far from the moment you make the right turn by the crocodile tree and there’s a good chance that:

Once you reach the cave itself, there’s a bit of a scramble to get to the top. The scramble to me was pretty easy but it’s recommended you wear good hiking shoes here to reach the top (basically inside of the cave). I wore the Salomon Speedcross 5 here and it was perfect.

Once you’re up at the top, there’s a good chance you’ll also see other people there and may have to wait your turn to take the same picture I did. Luckily most if not everyone who goes there is polite, takes turns and if you’re alone will take your picture if you ask nicely. 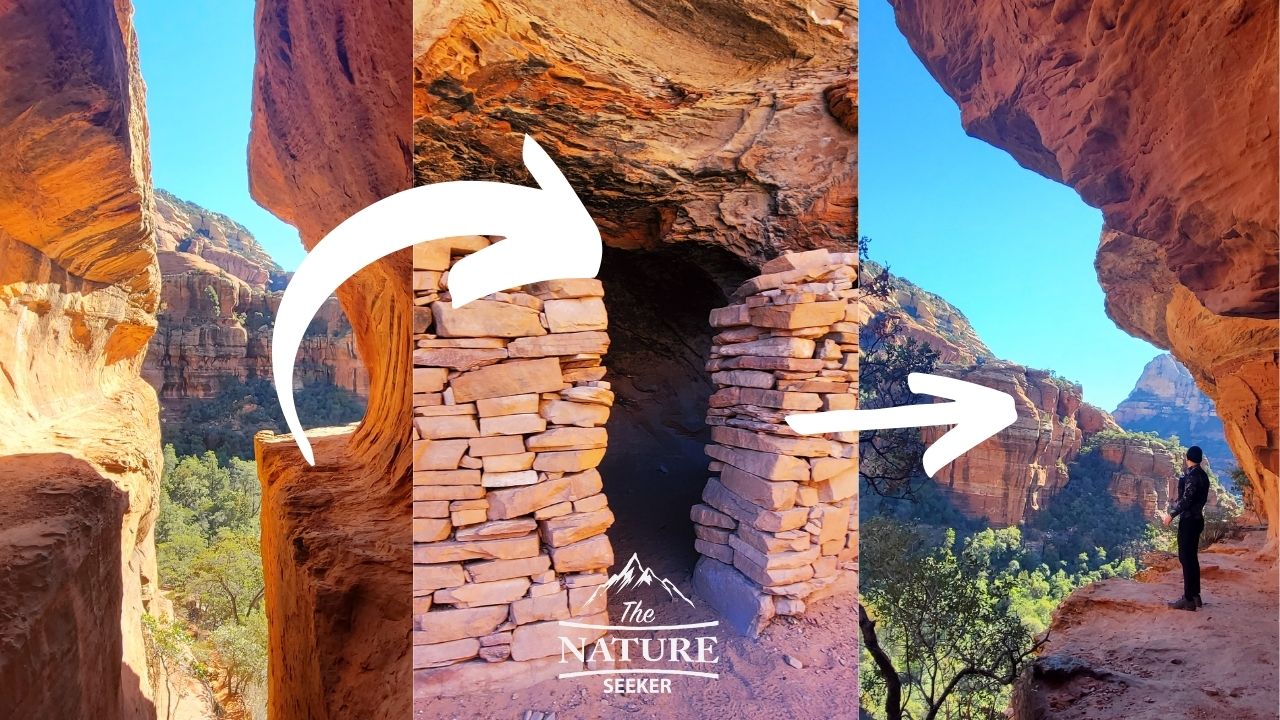 7) Bonus! Explore the Indian ruins near the Subway cave:

About 100 feet from the cave itself is an old Indian ruins that’s a small cave with man made rocks stacked on top of each other. To get there, you have 2 options:

Option 1: Go back down the same path you climbed up to get to the cave, then right at the bottom, turn right and stay close to the canyon walls until you see a path up.

Option 2: Take the right side of the cave to the end. It’ll turn right and take you around the rock wall.

Keep following it until you reach the same Indian ruins. This option will take you closer to the edge of the cliff/canyon and if you’re not a fan of heights, I would suggest you go with option 1.

8) Heading back to the Boyton Canyon trail:

Once you’re done sightseeing and taking pictures, just backtrack your way to Boyton Canyon trail. From there, you’ll have 2 options:

And there you go! Enjoy the Subway hike! 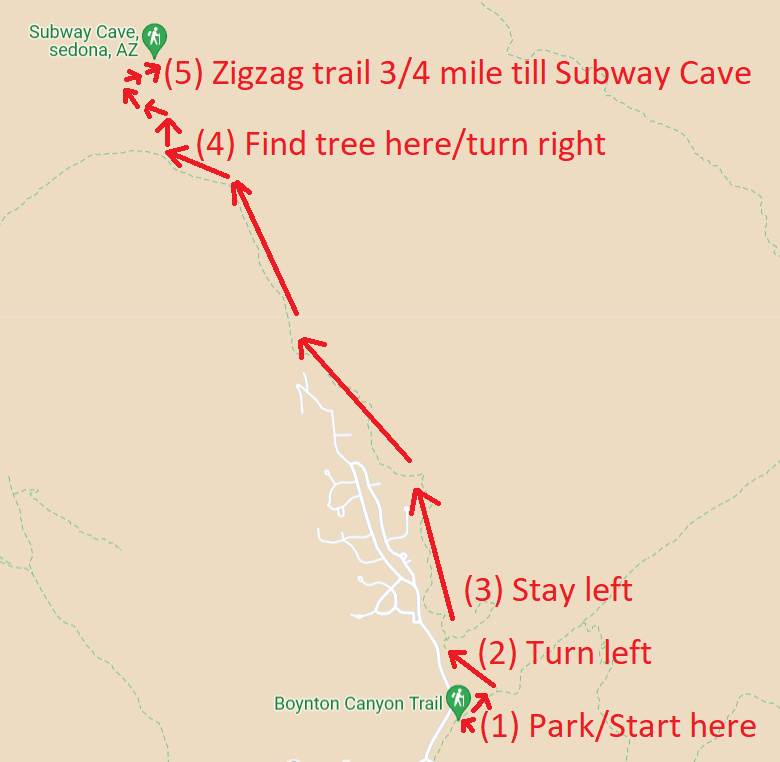 I would recommend you take your time with this hike and enjoy the journey there, not just the end point.

The views on this trail are amazing and it’s something where you’ll want to stop many times to take picture and enjoy the scenery!

Here is an additional map I included from Google that shows the turns and how to go about this particular trail when you go.

Just remember there are other options along the way but if you’re in a hurry and just came there to see the cave, follow the instructions.

I hope this guide was helpful to you and that you find the cave without any issues!

Just in case, here’s a video on the same topic. It was one of the better videos I saw that helped me find this cave, although certain directions I had to kind of fill in the blanks myself.

Anyway, thank you for reading this guide and I do hope it was truly simple enough for you to use and to find that awesome cave in Sedona! 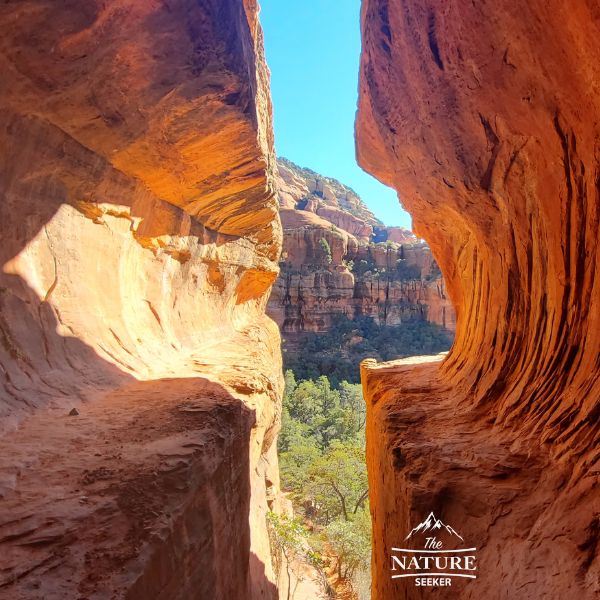 Other questions about the Sedona Subway hike:

How long is subway hike in Sedona?

It takes about 3 miles to hike to the Subway cave in Sedona.

How hard is the hike to Subway Cave in Sedona?

Most of the hike to the Subway Cave in Sedona is easy. Once you reach it though, you will have to scramble to reach the best area of it.

Where do you park for the subway cave in Sedona?

At Boyton Canyon Trail. This is the official parking lot from which you’ll hike to the Subway Cave in Sedona.

If there are other questions you have about this trail, you can leave them below.

Hiking shoes and other gear that’ll help make the Subway hike better for you: 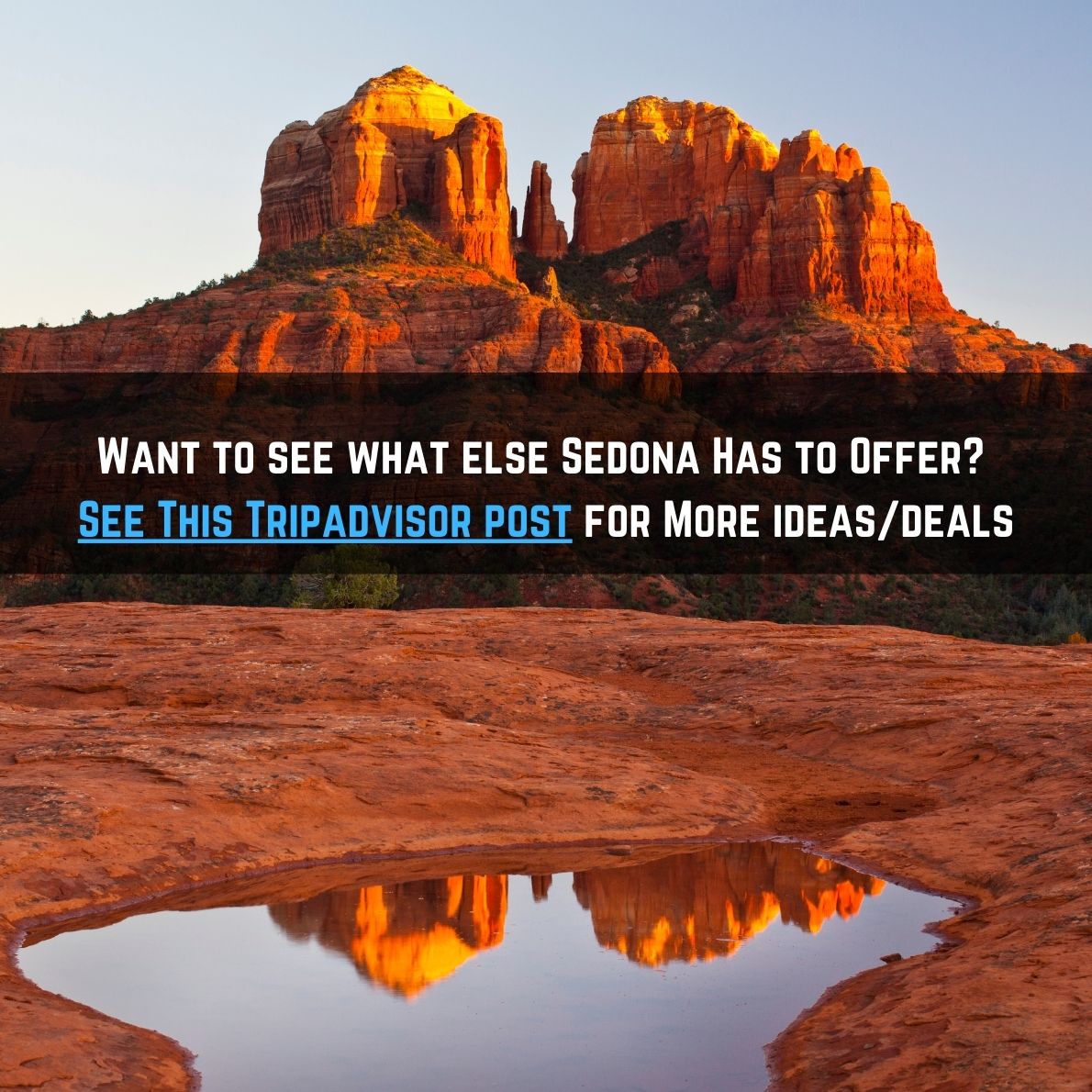 More stuff to see in Sedona AZ (because of course there’s more!):

I was in Sedona for only a day and a half and even though I got to see and do a lot, let’s be honest, this region is so stunning with tons of hikes and activities that even if I kept at the pace I did, I’d need 2 weeks to see enough to be considered a TON.

Therefore if you plan on coming here, whether it be the hike or whether to see even more Sedona hikes, check out Tripadvisor here ahead of time to plan a trip there.

For me, I have already planned for several new hiking trails to explore next time I visit Sedona using my tutorial on how to find easy hikes near me.

Other than this, I’m personally looking to exploring more waterfall hikes in Arizona overall because there are some amazing ones in this state too.

And finally, I have created an article with the best day hikes in Arizona which includes a few in Sedona as well.

Update: Ever since my first trip to the Subway Cave, I returned to Sedona months after and explored more amazing places. Here’s just a small list of them:

I do have more but these are specific cave hikes I did in Sedona. If you have any questions about them (or the Subway one), let me know!