I’ve personally completed the Keyhole Cave hike in Sedona and in this post will be detailing everything you need to know to do it as well.

The thing about the Keyhole Cave hike is that:

Never the less, with these warnings aside, I’ll be sharing the details about this hike and what to expect, so you can decide if you are up for it too.

Quick info on the Keyhole Cave in Sedona: 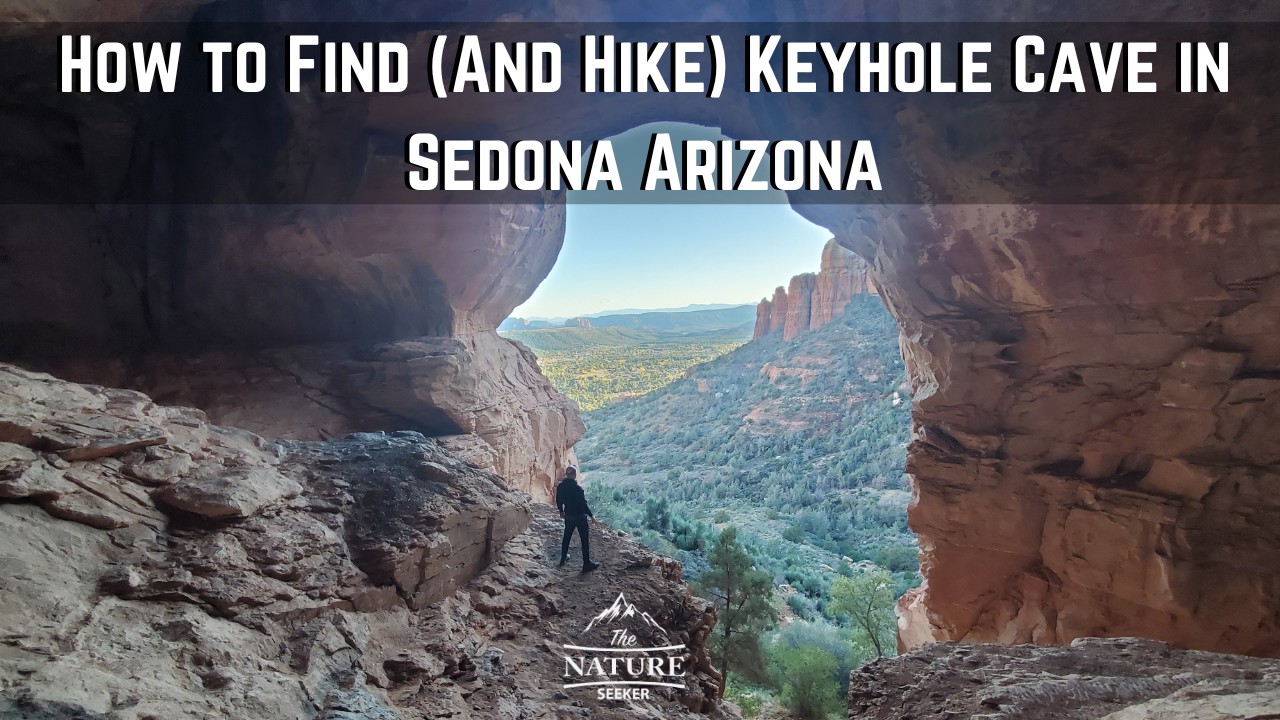 And on the pros and cons end of this hike: 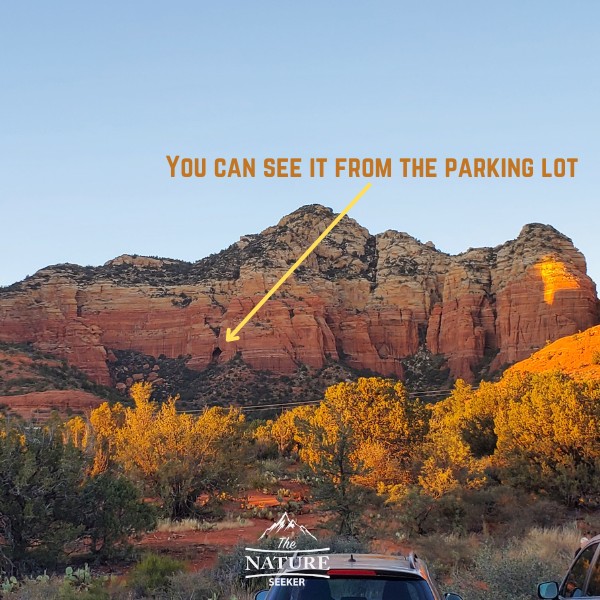 The first thing you need to do is find an official trailhead parking area but the thing I learned about this hike is that if you use Google maps to reach it (there is an official Keyhole Cave location), it’ll take you to the wrong location.

In order to start on the proper “trail” to this cave, you have to begin at Sugar Loaf Trailhead. That trailhead is a popular destination and has a fairly small parking lot where maybe 10-15 cars can fit.

From that parking lot are several hikes available, including the one to Keyhole Cave, but at the same time, Keyhole Cave is not an official spot on that list.

The good news is that you can actually see the Keyhole Cave from the parking lot and that can actually be used as a visual aid as you hike to it later (although sometimes it’s hard to see it, ironically as you get closer to it). 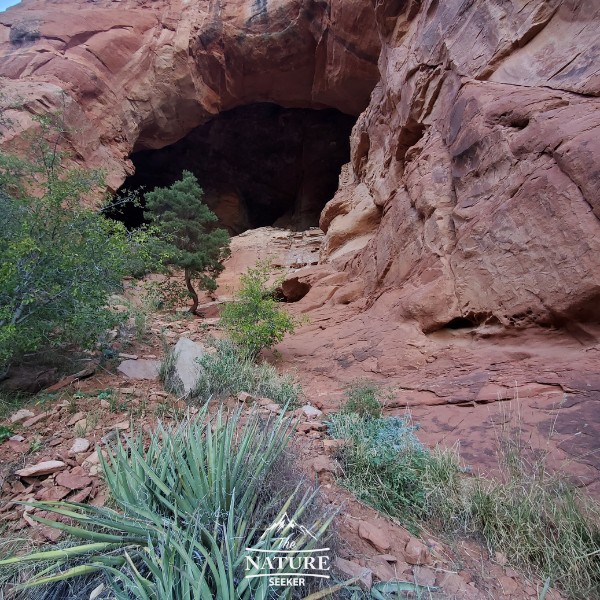 2) Beginning the hike to Keyhole Cave:

Remember, there is no trail to reach it, and what you will be doing is starting on an official trail on Sugarloaf Trailhead (called Teacup trail), but going off trail to reach the cave. Now there are 2 ways to navigate your way to this:

1) The first way is visual: Again, you will be able to see the cave from the parking lot and you can see the direction in which it’s at and keep heading in it. You will be off trail and will often see and stumble onto places that zigzag which look like trails and you need to be very careful and not wander off while navigating in the necessary direction to reach the cave (heading north basically from the parking lot).

2) The second way is using Alltrails: There is actually a trail “map” of Keyhole Cave available on Alltrails which is the one I used when I was heading there, although in hindsight I could have also used the visual route too.

This approach in combination with a visual guide will help you.

Now I have to make the following very clear once again: You will be off trail when you do this hike. For me, I started on a more official trail and then the map on Alltrails took me off it, and I began taking what looked like other mini trails in combination to reach the cave.

However, in doing so I had times when I was in deep wooded areas with trees that had a lot of thorns, cactus’s that were stinging me and overall, the hiking experience for about a mile or more was not very pleasant.

I would strongly recommend you wear fully covered clothing like pants because there’s a good chance you may have this problem too, not to mention that there are animals like snakes in the area and just wearing more protective clothing is safer in general here. 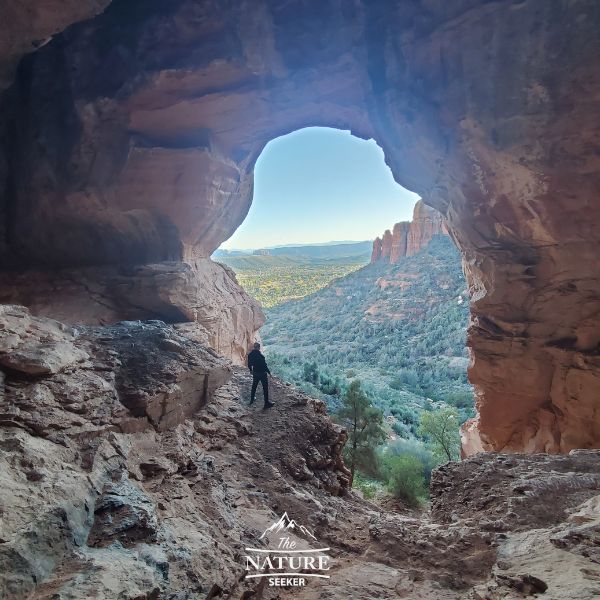 3) Reaching the Keyhole Cave and (optionally) climbing it:

As you get closer to the cave, most of the hike’s elevation will take place here and it’s a little bit annoying, but nothing crazy. Once you do reach the cave, it’ll be a gigantic opening that’s difficult to miss and you may likely find other people there too (I saw at least 2 people before others came as I left).

Anyway, once you get into the cave, if you want to reach the iconic area where people sit inside the cave with views of the Sedona mountains outside, that’s going to require you climb about 30 feet up and there are at least 2 ways I saw it being done. In my case, I went left and climbed to get to the proper areas.

Now this is again where I have to warn you about the dangers:

I do not recommend climbing in this part of the hike. I did it because I just enjoy challenging myself but in all honesty, it’s not a smart move and most people who I read reviews from on Alltrails for this hike say pretty much the same thing. You can get amazing photos from the bottom of the cave too.

I had a few close calls climbing up inside the cave area and climbing down was even harder because I couldn’t see where my feet were going. Fortunately I had vocal help from someone who saw more than I did and told me where to put my hands and feet.

Another big thing to note in this area: I also read on Alltrails that people lost their GPS connection or it went crazy. This is exactly what happened to me too. Inside the cave (maybe it’s a vortex or magnetic issue), but my GPS started scrambling and adding about another 6 miles to my hike incorrectly.

I’ve heard some people mention that the Keyhole Cave may actually have a vortex and I’m inclined to believe that after seeing what happened to my GPS. In fact, here is a side by side comparison of how the trail should have looked on Alltrails and what it ended up looking like on my end: 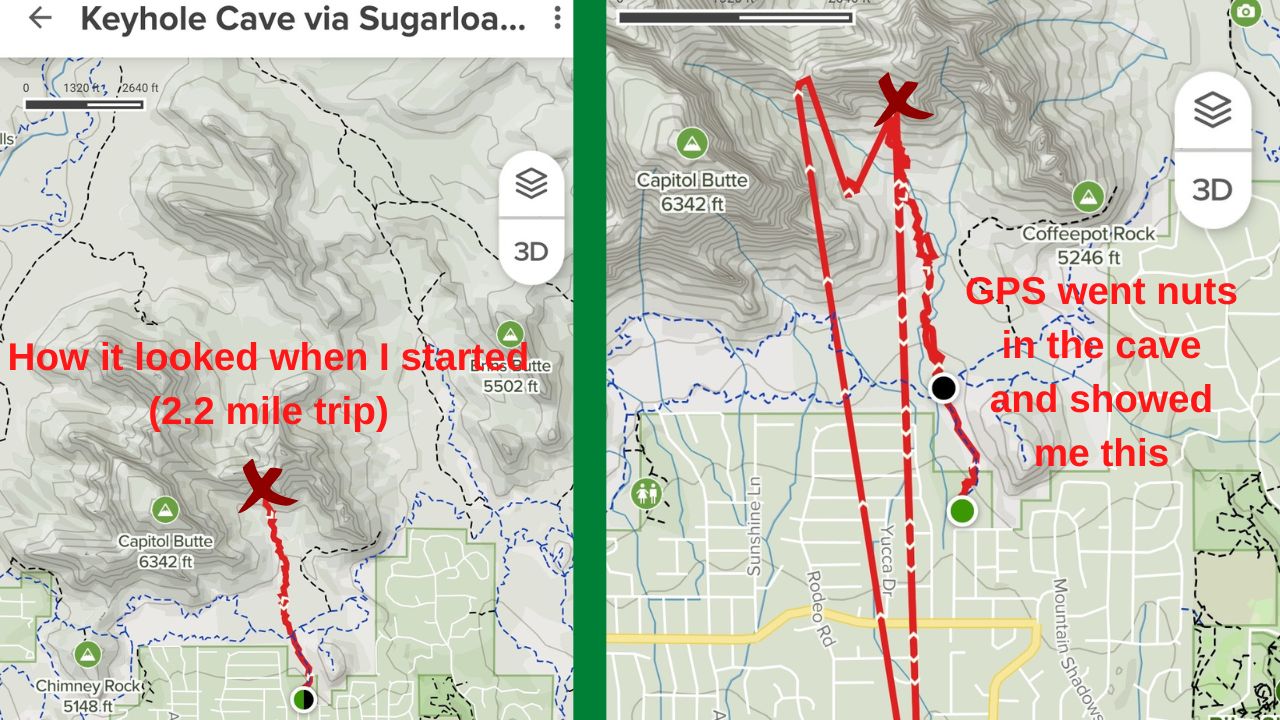 I say this because not only can it also happen to you, but don’t mistake those added red lines of navigation when you have to go back from the hike.

Once you’re done exploring this area, it’s just a matter of heading back down south to reach the parking lot to complete this hike.

What to bring for your hike to Keyhole Cave:

The most common questions regarding Keyhole Cave:

Where is Keyhole Cave?

How do I get to Keyhole?

You’ll start at Sugar Loaf trailhead and see the Keyhole Cave from there, then navigate to it by first going on the Teacup trail, then going off trail to reach it.

Other (safer) hikes to explore in Sedona:

Keyhole Cave is stunning, but it’s one of many others which I will one day do a post on, but in the meantime, here’s a few other hikes, including cave hikes you can try:

I have more posts on Sedona which you can find by simply using the search on my site, but just know that if you’re not feeling the hike to Keyhole Cave after what you saw here, don’t do it as there are so many other cool and safer hikes to try out in Sedona.

I personally loved this hike, but it’s not for everyone and I hope these instructions (and warnings) are helpful to you! I’d love to hear your thoughts on the Keyhole Cave if you do it.