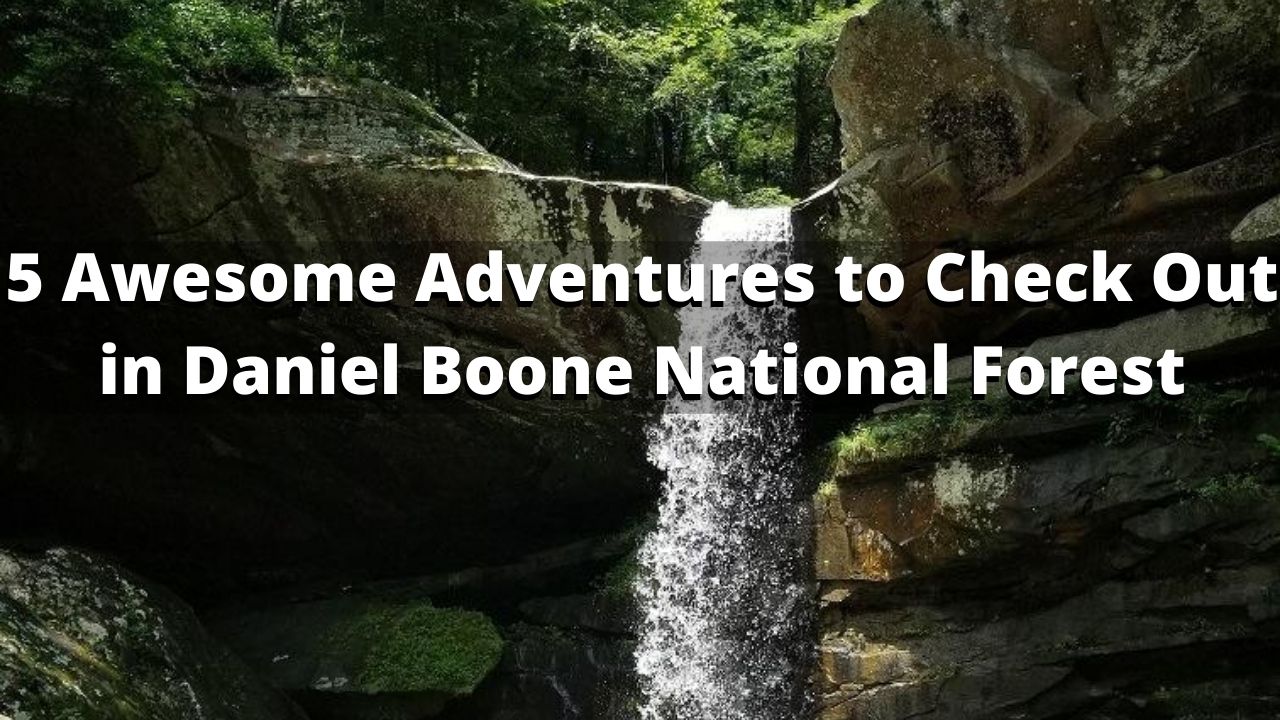 Daniel Boone National Forest is an incredibly large area to explore and I had the opportunity to do that last year. Let me share 5 things you need to do while there.

Let me just share a quick story about how this trip even happened. A buddy of mine and I were crossing through the Blue Ridge Mountains, and as spectacular as that was, we got bored of seeing the same kinds of sights while on it.

Had we continued, we probably would have seen the same thing for days and because our Appalachian Mountains road trip was entirely improvised and we could go anywhere, the closest thing to do the Blue Ridge Mountains was Daniel Boone National Forest, only being a few hours drive west of us.

Here is a map of Daniel Boone National Forest: 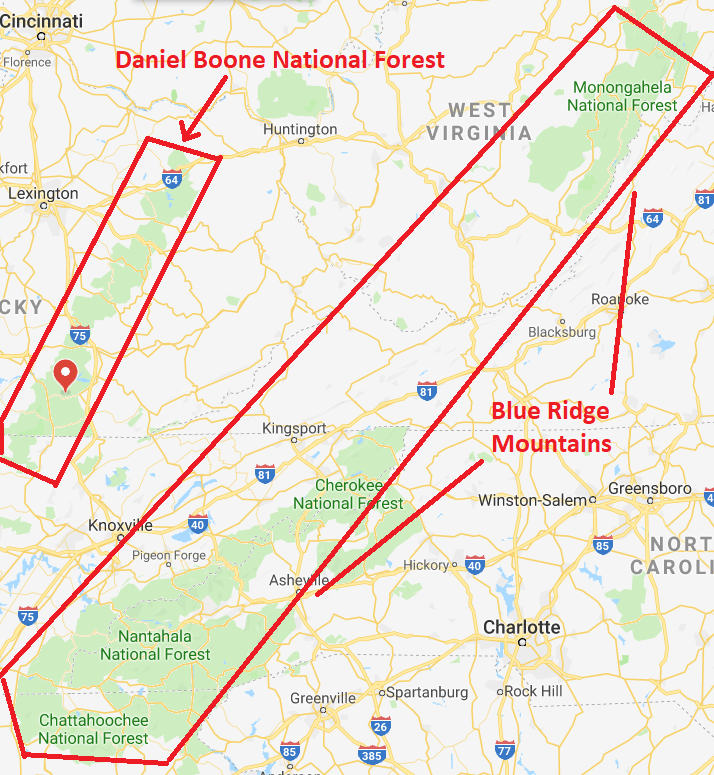 The only problem was that the map listings for many of the supposed “good spots” were really messed up and actually led us in a different direction. Let me give you one example…

One of the best spots on the list I’ll be giving you involved a popular natural bridge (called Sky Bridge) location within this region, but the map listing for it show that it’s a completely different area than it really is.

In fact, had we not accidentally encountered it later in our trip, we would never know this, and so this article is going to correct those mistakes and help you save time.

The following areas I will be covering are considered to be some of the best places to explore within this region.

So with this in mind, let me list the 5 places I highly recommend you see while in this region.

5 places & things to do in Daniel Boone National Forest:

The following list will begs from the southern most part of Daniel Boone National Forest and heads north: 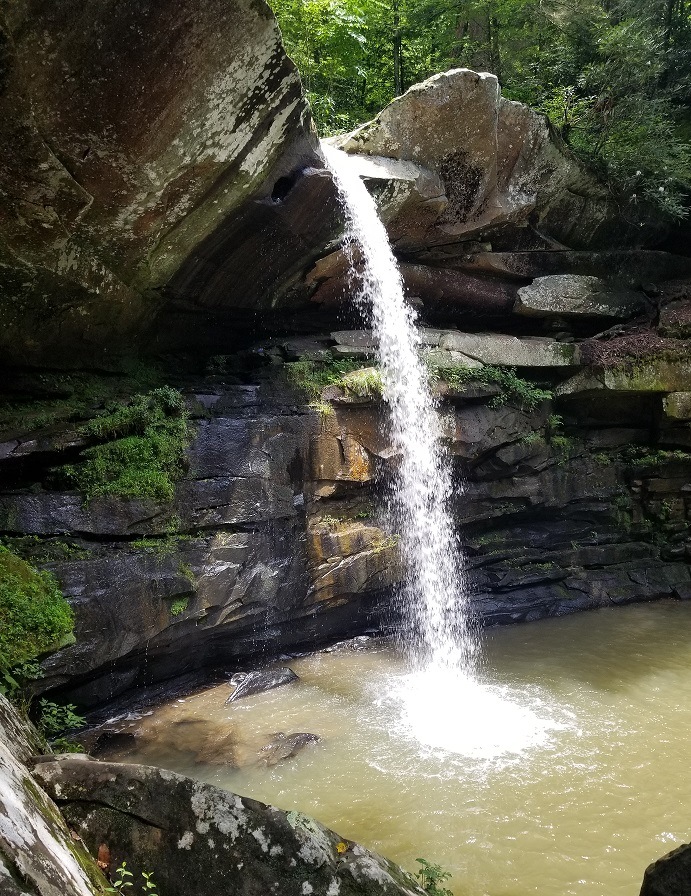 When we exited Blue Ridge Mountains, and let the GPS take us to what we thought was going to be the sandstone region I was talking about earlier.

Sadly, because the map listing was incorrect, we basically ended up lost somewhere and had to stop in a town to ask where the sandstone area was.

Unfortunately no one knew, but they did recommend we visit a popular waterfall location, Eagle Falls, and so we did. That ended up being a GREAT decision.

Here is the location of Eagle Falls and I highly recommend it! It isn’t a big waterfall, but the surrounding region and the waterfall itself is gorgeous!

There are nice hikes in this area, caves, trails that are in the water and you can actually swim in a small “lake” right near the falls and that’s exactly what I did (and really enjoyed!).

There is a parking lot very close to the falls where the walk to the top of the waterfall is about 5 minutes.

But if you want to reach the base of the falls and even swim in the water, you’ve got to walk a little bit further and hike down to it and that can take 20-30 minutes. Here’s a picture of me swimming in the area right under it: 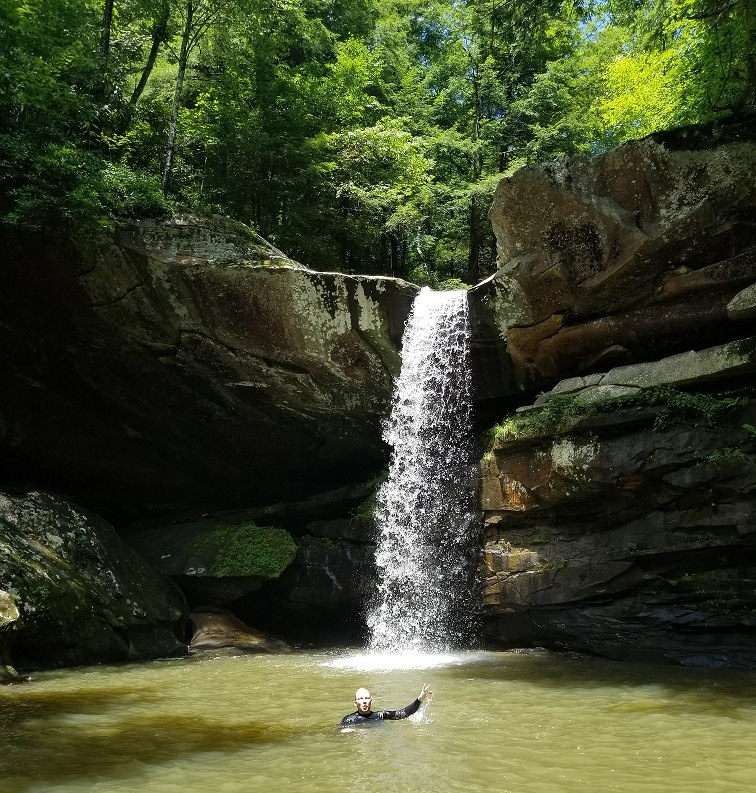 Considering how hot the weather was, swimming in this place was extremely refreshing and the whole area is in a forest anyway, so we had nice shade the entire time. Also here is a great photo of one of the cave areas near this falls: 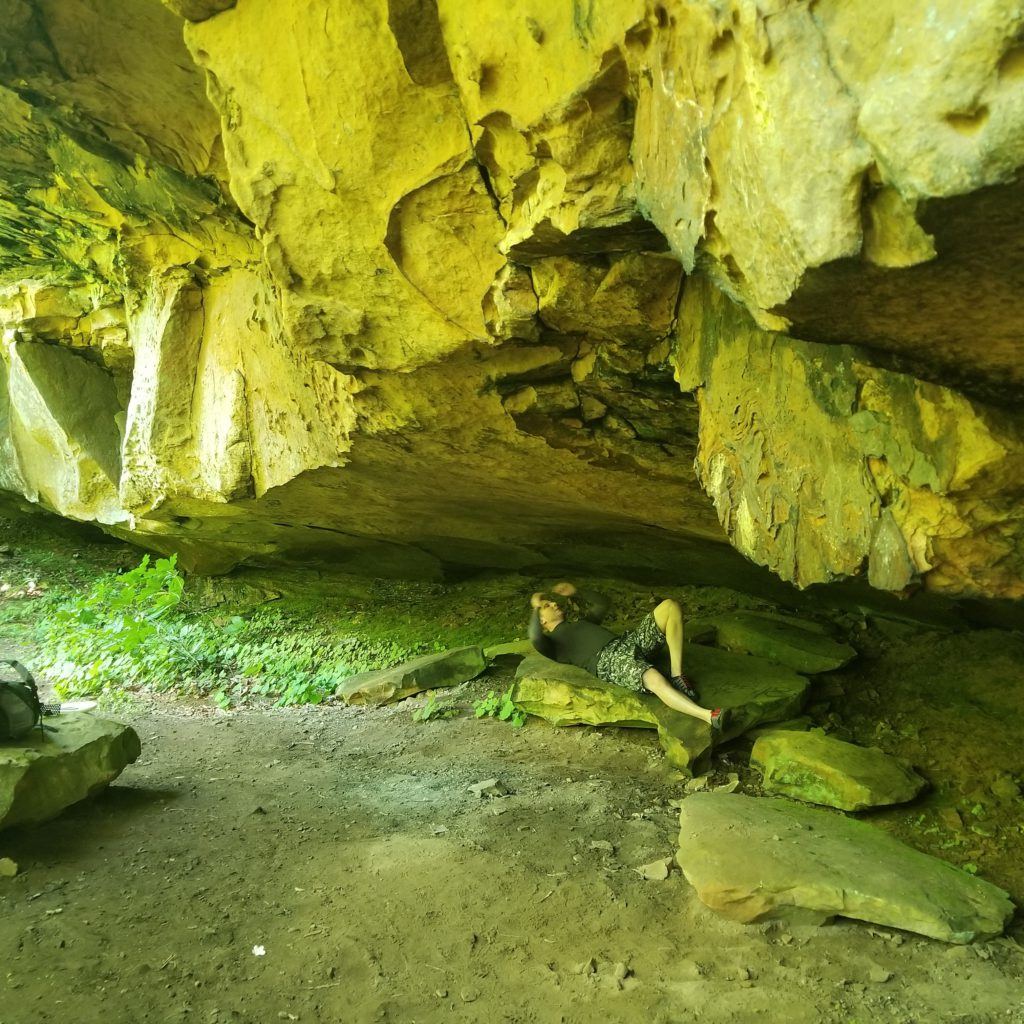 While we were there, we met a local who visits that spot, asked him about the natural bridge location we originally wanted to see, and he told us he didn’t know of any area where we were that had it, but recommended we go north through Daniel Boone National Forest as the sights there were much better.

Being that our trip was going to take us north anyway, we decided to try our luck and for the next few hours, continued toward what we thought was the natural bridge.

Did we make it? Oh yeah.

This is the location that we originally wanted to see and what most people would likely see if they Googled Daniel Boone National Forest. Except the problem is, most of the spots you’ll be told to find this place are in the wrong location. That will show you the trail to the famous natural bridge in this whole area. Here is the location to natural bridges: 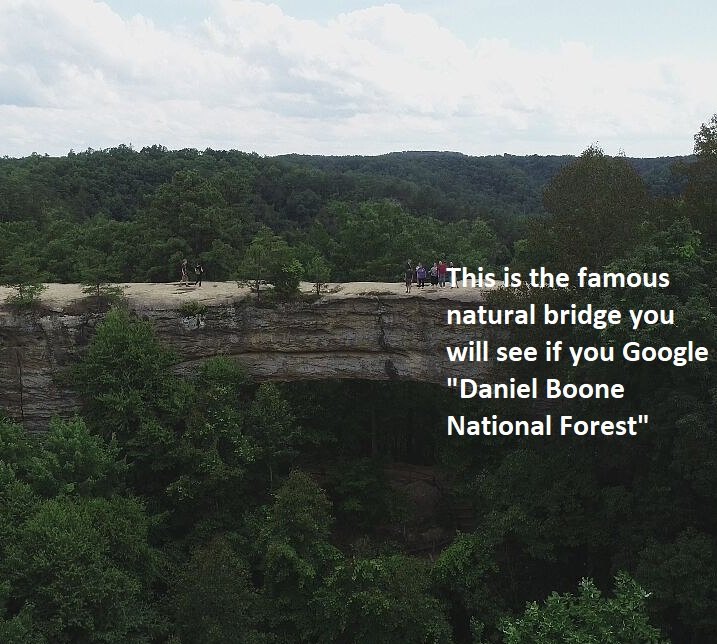 It’s how we found it and while you’re in that region, you will see signs which say “Natural Bridges” or “Skybridge”.

There is a large parking area which will lead you to a 1.5 mile hike through beautiful areas before reaching the natural bridge itself. And let 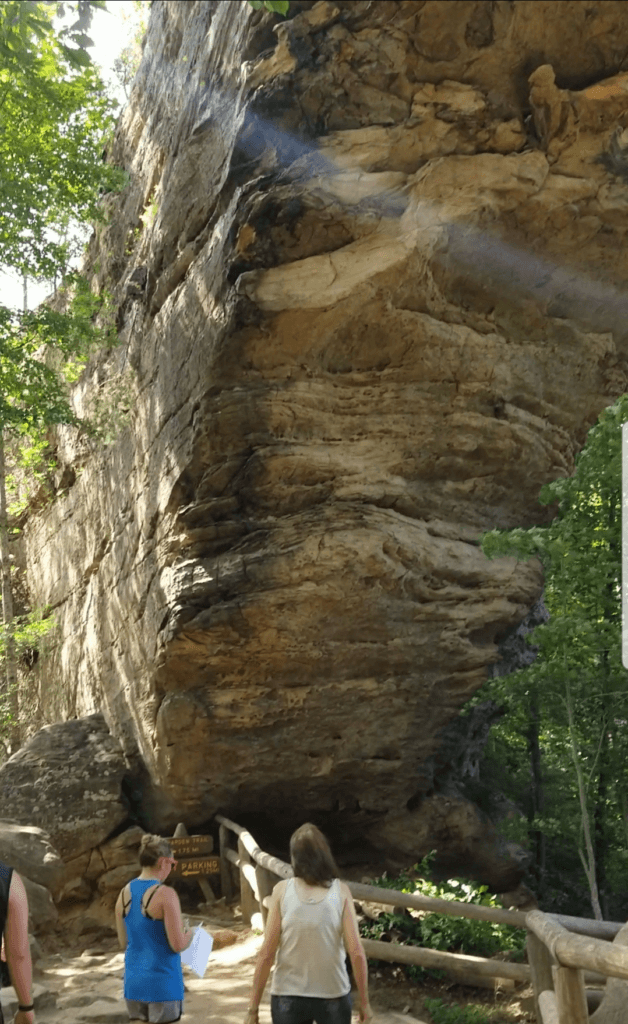 me tell you, while we were doing this hike, we had NO idea that it would lead us to the original destination.

It wasn’t until we got to the top and saw the natural bridge that we realized that we accidentally made it:

We were in this area in July and let me tell you, not only was it very hot, but the bugs here are merciless. We would later have to deal with even more of them as we continued our trip.

But you will find this particular spot on the list to be very popular. We did run into a lot of people while hiking up the trail to the natural bridge.

By the way, natural bridges in my opinion are amazing things, especially in this area, but I had the chance to travel to the west coast and found the natural bridges there to be amazing (and there’s many more there).

This Pacific Northwest article has 10 stunning spots to see where you can see where in the west coast they are located.

So before I move the next destinations, let me just clear this location up since most of you who go to Daniel Boone Forest will likely try to come here:

This natural bridge is in Daniel Boone Forest, but on the northern side and in a park called Natural Bridge State Park.

Want to see more sights like Skybridge? 7 other places in the US where you’ll find similar natural bridges:

1) There happens to be one that’s about twice as long and high. It’s called Jacob Hamlin Arch and it can be found in Coyote Gulch.

2) Then there’s also other natural bridges across the Pacific coast highway, in California, and especially places like the Oregon Coast.

3) There are also closer areas to Daniel Boone National Forest with natural bridges such as in Virginia State with a place called Natural Bridge State Park.

6) Rainbow Bridge Arch. You’ll find it in one of these amazing hikes in Utah State and it’s literally the largest natural bridge in the United States.

7) Devils Bridge. You’ll find this one in Sedona, Arizona.

This area is literally 10-20 minutes away from natural bridge state park and has a number of fun things you can do there. Firstly, the whole area is shaped in a circle and has a road you can drive around (in a circle). Within that circle are several paths you can take with your car to view amazing outlooks.

If you just want to drive, you will find caves, exits to scenic drives, roads and even trails to outlooks. Here is one of the spots we drove through: 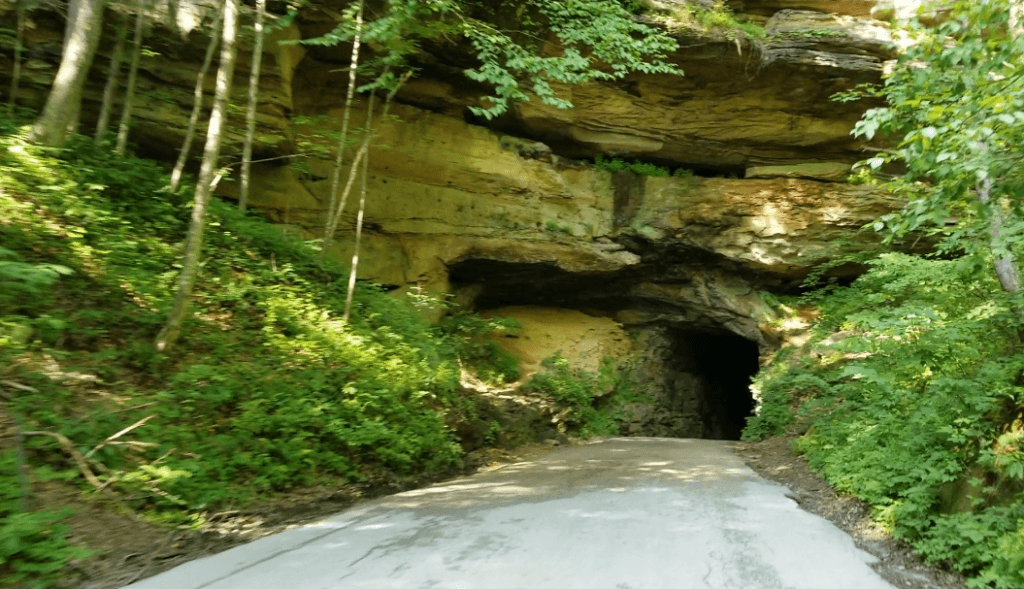 That is a cave with a road inside folks! It is one lane only, so you need to take turns to get through it. But these beautiful areas are all over the Red River Gorge area.

The remainder of the spots on this list will be in the Red River Gorge area. We just didn’t have enough time to explore the rest of the Daniel Boone area and had to make our way back to the Blue Ridge Mountains the next day. So we figured we could get the most out of our day by just spending the last few hours we had (sunlight) to explore Red River Gorge. 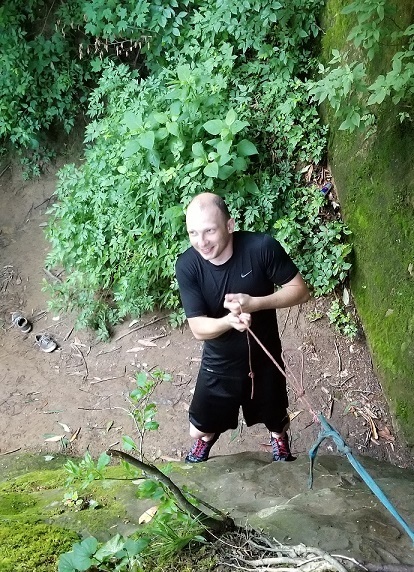 As you go through the circular road in this location, you will half the time be parallel to the Red River itself. There will be opportunities there to find giant boulders to park near, climb up and jump from.

Warning: Now I do recommend you be very careful with cliff jumping anywhere and in our case, the water was very dirty and we couldn’t see the bottom so when we found a good spot to cliff jump, we first got into the water and tested to see how DEEP it was.

When we saw it was safe, only then did we climb and jump. Well in all honesty, my friend jumped, I was too scared.

But we did swim and if you’re wondering why we would swim in murky water, the answer is that it was very hot that day and we needed anything to freshen up. Even swimming in murky water was better than sitting in a car all day or hiking while sweating.

Scenic overlooks are plentiful at Red River Gorge and as I said, you will see plenty of signs for trails that you can enter with your cars.

We chose the Chimney Rock trail, which led us to a parking lot, from which we walked about a quarter of a mile to the overlook.

This was one of the shortest walks we had left before the sun set, so we had to go with one that would allow us to see one last sight in Red River Gorge and Daniel Boone National Forest, before we continued on our trip.

Again, I have to talk about the bugs at Red River Gorge:

We were swarmed by them in this region and while on the Chimney Rock overlook, we ran into a couple that actually tried camping near the overlook for the night. They made a huge mistake and I can’t help but recall the boyfriend screaming every few seconds about being BIT, yes bit by the bugs.

It’s beautiful, but perhaps traveling in a more cold season to this spot is recommended. We’ll keep that in mind and so should you.

Overall, Daniel Boone National Forest was a delight to explore and there will be future explorations of this region when I get the chance.

We took a risk breaking from our trip through the Blue Ridge Mountains, but it allowed us to see the beautiful spots you saw in this article. And of course, being that this place was so huge, obviously, we could have seen a lot more, but for a day trip through this region, we really did cover a lot of places.

4 thoughts on “5 Things You Need to do in Daniel Boone National Forest.”