Ship graveyards aren’t exactly something you’d think NYC is known for, but there is actually one in existence and it’s located in Staten Island and is called Arthur Kill Ship graveyard. I’ll show you where it is and how to access it because there is no main road leading to it.

The Arthur Kill Ship Graveyard is one of the only “none” nature posts I’ve done, but it is an awesome location to check out and the photos I’ll show will prove that!

As much as I love venturing far away from my hometown of NYC, I really should look closer at the small, yet beautiful places, which there are many of, right here, “next door” to me.

Enter the following place in question, officially known as Arthur Kill Ship Graveyard (location), a pretty small, but wondrous place where you literally see many old, rotten ships floating and drowning, close to one another. I first discovered this place from a friend of mine who I go hiking with, who also wanted to explore it.

Yet when the opportunity arose, he was busy, I was free and so I took my grandfather with me, who also enjoys exploring new places (He’ll be 90 soon!).

Here is a snippet of what the Ship Graveyard in Staten Island looks like:

You’d be surprised to know that a Google search isn’t enough to help you find this location precisely, although the area where this graveyard is located is pretty small, there is NO big, official entrance or gigantic sign that says you’re there.

In fact, when I was driving past it, everything GPS related told me I was there, yet there was no driveway or entrance I could take, so I ended up parking nearby and asking for directions. So here is how you can find this place too.

Officially, on Google maps, this is where you will “find” the Ship Graveyard:

As you can see from the left, there isn’t really an exact address, just a zip code really…

Also the actual location marked on the map isn’t even an entrance as I found out. You have to park your car on the Arthur Kill road itself (by the way, that’s why it’s named what it is, after the road), then walk from there.

It is also open 24 hours supposedly, although to be honest, I would not want to explore this place at night, it’s straight up dangerous and there’s no telling where you’ll step when you can’t see a thing, better to explore it during the day when you can actually see the whole marvel of this small place.

So here is the marker you need to look for:

I actually had to stop and ask someone for directions there, but there’s 2 ways to enter. Also from looking at a map post exploration, I saw that there was an entrance which led there, but it appeared the entrance was to a private business so I though entering there would mean entering private property. Perhaps a second visit will clarify this…

What’s there to do at this place?

Sightseeing. Well if you’ve never seen a ship graveyard (the only ones I saw was in Scooby Doo cartoons before this), you may want to see one in your lifetime. It’s a sad, yet beautiful sight, seeing such old relics in the process of decay and rust, yet at the same time, strangely attractive to the eye and begging to be seen closer. Which brings me to a possible activity worth considering:

Kayaking. As far as I know, there are no rules against kayaks being used in this area, and you can get up close to many of the broken down ships when you’re there via using one. Although I would absolutely avoid getting wet or getting too close to the ships, considering how much rust there is in the area.

Walking onto the actual broken vessels. I believe this is also possible, all I did when I was there was film from a distance, so I didn’t get a chance to test this out, but there are certain vessels which are leaned right onto the shore, making it possible to step onto them and walk across as far as you can. Obviously be careful, these places aren’t maintained at all, and it can be slippery/dangerous to do so.

And keep in mind the vessels which are there aren’t your basic, small boats. You will see large vessels such as tankers, tug boats and other cool things while there. I would absolutely NOT recommend swimming there because the water is likely going to be VERY dirty, plus there’s no telling if there’s any dangerous, rusty debris floating around or underneath you…

If you’re interested in trying some other activities while in this area, you will find a paintball arena as well as a driving range (golf course) nearby.

But back to the main attraction: 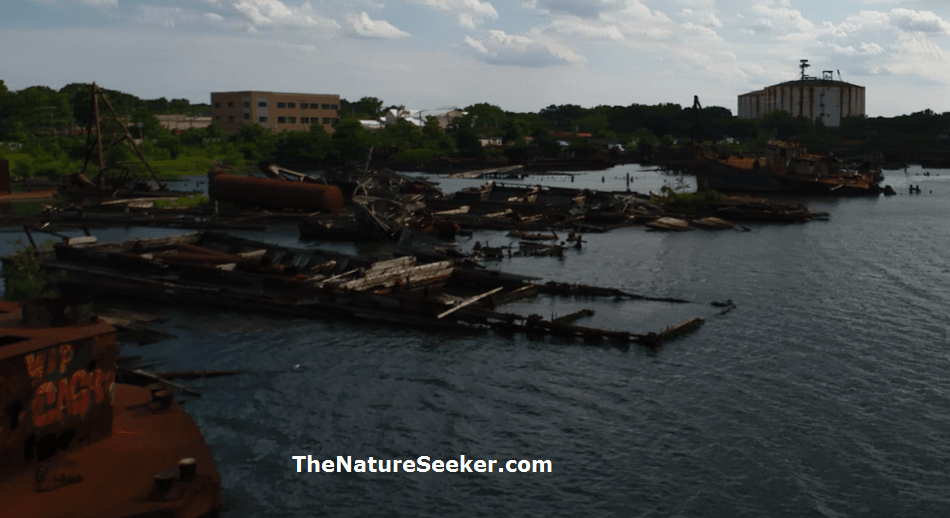 To be honest, I didn’t think I’d enjoy looking at such a place. Going in, I though it would be like being at a junk yard for cars, yet because it’s ships and they are in the water, some still floating, some almost sunk, and some still looking like they could be useful, there’s a strange enigmatic feeling when there.

It’s extremely peaceful in this area and right across, on the other end of the river, you will find New Jersey, although I don’t think you’ll be able to kayak there because it’s private property, but still, you may like looking at it from a distance.

I will recommend any nature enthusiast check this place out, and especially if you’re into ships, you will enjoy it there as well. It’s not really an attraction, it’s more of a place you can check out for a short period, then move on with your day.

We didn’t stay there too long, about 20 minutes, and had enough, but I will come back to it someday. In any case, tourists to New York City and even natives like me will stand to benefit from this sight, if of course this is the sort of stuff you’re into! Although I will say, I was never into seeing “dead” ships, but I’m glad I did!

Although this isn’t the sort of “nature” experience I usually take, I will say it was a pleasure to see it and add a new unexplored place in my hometown to the explored list now 🙂

Other awesome locations to check out near this area:

If you’re in the Staten Island area, one highly recommend nature location you should check out is Clove Lakes Park. If ship graveyards aren’t your thing and you prefer nature, you’ll find it there!

Looking for exciting nature destinations in NYC and outside of it?

Check out these other scenic drives and locations around New York (state).

8 thoughts on “Did You Know NYC Has a Ship Graveyard? Here’s Where it is.”